Vidhi Bengaluru would like to invite you to celebrate the occasion of its first Briefing Book launch titled “15 Legal Reforms for Karnataka“.

The launch of the book shall be followed by a panel discussion on the topic: “Towards a Better Bengaluru, Reforming Urban Governance in Karnataka”

Justice (Retd.) Santosh Hegde (Former Justice of the Supreme Court of India and Former Lokayukta, Karnataka), Rohini Nilekani, (Philanthropist) and Dr. A Ravindra, Former Chief Secretary, Government Of Karnataka are the panelist for the event.

06:45 p.m : Panel Discussion on -“Towards a Better Bengaluru, Reforming Urban Governance in Karnataka”

You can register for the event here. 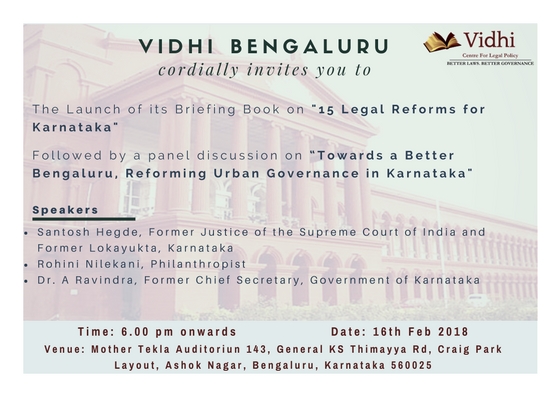 The Vidhi Centre for Legal Policy is an independent think tank doing legal research and assisting government in making better laws. Vidhi is committed to producing legal research of the highest standard with the aim of informing public debate and contributing to improved governance. Vidhi works with Ministries of the Government of India and State Governments, as well as other public institutions, providing research and drafting support at various stages of law-making. This work is conducted by the Public Law, and Financial Regulation & Corporate Law verticals. Vidhi’s work includes engagements with the Central Ministries of Finance, Corporate Affairs and Home Affairs, the Finance and Law Commissions of India, the State Governments of Delhi and Karnataka, and the Reserve Bank of India. Vidhi also conducts and freely disseminates independent research in areas of legal reform which it believes is critical to India’s future. Currently, the areas of research are: Judicial Reform: Research in this area takes a data-driven approach to suggesting reforms that address the problem of judicial delays. Health, Environment and Law: This initiative conducts empirical, interdisciplinary research at the intersection of environmental and public health issues. Education Law: This initiative conducts original legal research on the enforceability of the Right to Education Act, and the nature of regulation of schools.

If you spit in public places, you put yourself and everyone at risk. Be a responsible citizen and quit spitting in open.

This year the deworming campaign will be implemented through #DoorToDoorDeworming & Frontline health workers will observe #COVID19 safety guidelines while visiting each house to administer Albendazole. Ensure to get your child dewormed.

Tomorrow is Intl #YouthDay. I look forward to joining the Youth Engagement For Global Action webinar together with youth representatives sharing their ideas and solutions to overcome the challenges #COVID19. Solidarity!

Join the Youth Engagement For Global Action webinar to find out more about how young people are taking part in the #COVID19 response:

Just hours after the deadly #BeirutExplosion, health workers & volunteers from @Caritaslb, a key @WHO partner, were on site providing medical care, psychosocial support & food relief to affected communities in the area.