This seminar series by the Justice Project has emerged from a research project coordinated by Aakar, a Trust based in Delhi, aimed at building a series of dialogues across the five project countries(Bangladesh, India, Nepal, Pakistan and Sri Lanka) through films and research papers that will map a range of contests on the idea and practices of justice as they take shape in different sites of South Asia.

The project produced fourteen research papers and five films in Bangladesh, Nepal, Pakistan, Sri Lanka and India that bring to the fore the most pressing concerns on justice in the respective countries. The papers and the films were produced by some of the best-known researchers and documentary filmmakers of the region.

In June the Justice Project launched five films from  at India International Centre, New Delhi. You can read more about it here.

The research papers and the films produced within the project underline that as South Asia stumbles along the path of greater economic integration and convergence, what has been brought sharply into focus are the common and sometimes interconnected range of violent conflicts, social and cultural practices and, structures of governance.

Patterns of governance draw on not only a shared colonial legacy but also Constitutional processes that have overlapping trajectories.

The key note speaker will be Veena Das and there are some high profile paper presenters like Sara Hossain, Vrinda Grover, Rakhi Sehgal and more!

On 5 and 6 August 2015, the research papers produced under the project will be presented at a seminar to be held at India International Centre (annexe building), New Delhi. 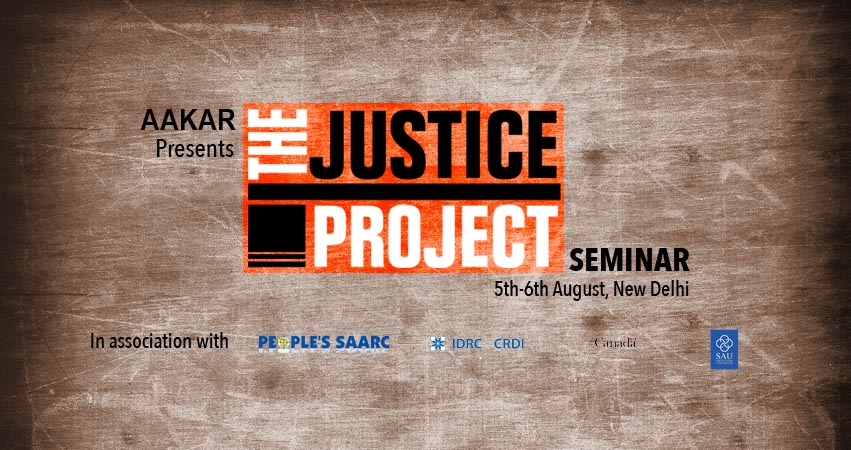 Objectives of the Seminar

1. Feed into the debate on ways in which the courts and justice mechanisms can deal with the gendered nature of violence; revitalise institutions of dispute management by insisting that rules of evidence in cases of violation be strictly adhered to and enumerate the long term consequences of a failure of following these rules of evidence.

2. Through visual and discursive research findings provide the necessary material that feeds into the work of recovery in post conflict situations.

3. In exploring the ‘frontlines’ of conflict and violence, the seminar series will map the micro process of violence, its impact on families and local civic institutions. Suggest steps of amelioration and look at conflict from a comparative lens.

4. Explore the fundamental imbalances between the demands of the state and the strivings of civil groups.

The seminar will seek through a dialogue between legal practitioners and civic groups to suggest ways in which legal and bureaucratic institutions of the state can better appreciate the corrosive power of violence to irremediably damage institutions.

The Justice Project is being coordinated and implemented by Aakar with support from International Development Research Centre (IDRC).

You can find full details HERE.