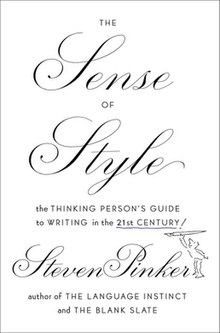 stics and how to communicate clearly. He published a guide on how to write called The Sense of Style (the name draws upon one of the most famous books written on writing well, ‘The Elements of Style‘).

In a talk delivered at the Royal Institution in London titled ‘Linguistics, Style and Writing in the 21st Century‘, Steven Pinker discusses the question- why is so much of the writing today so bad? He gives examples of academese and legalese, the use of which no lawyer could contest. This is a common question which people ask.

He discusses a few possibilities for this. The first is that this is a deliberate attempt, to ensure that what you say cannot be understood by everyone. This can often be useful for your profession, to ensure it is not accessible to people. Another reason is that people when they don’t have anything to say often try to use flowery language to make up for the content. A tendency quite a few experience when doing a task called assignments, also known as projects (see the comic below for illustration).

He then goes on to discuss the fundamentals of language, saying that we have a natural tendency to speak but not to write. Thus, he says that there must a principle we use to go about writing. For him, this is called the “Classic Style” as discussed in a book called ‘Clear and Simple as the Truth:  Writing Classic Prose’.

This approach treats writing as a window, through which you want to show your reader something.

The writer has seen something in the world which the reader has not yet noticed. She positions the reader so that she can see it with her own eyes.

The writer and reader are equals.

The goal is to create an objective reality and the style is conversation.

He says that there are various approaches one can take with writing, and classic style is the one which is the clearest and comprehensive.

What plagues the authors the most in other cases is trying to either talk about the act of studying itself. Or in an attempt to not leave anything unsaid we often overjustify, that is why we use words like “somewhat, fairly etc.”.

Classic prose gives the reader credit for knowing that many concepts are hard to define, many controversies are hard to resolve. The reader is there to see what the writer will do about it.

It is better to be clear and possibly wrong than muddy and “not even wrong”.

Thus, a sentence like “Americans are getting fatter” would be fine to say that not everyone in America is getting fat, but a majority are. This would bring a conversational tone to the writing, and make it easier to understand.

He then goes on to talk about specifics such as- how to use passive voice correctly, and discusses how we often end up writing unnecessarily elaborate sentences without realizing it. One of the reasons is the “curse of knowledge” where you assume information the reader knows. He also gives tips on how to avoid this trap. You can watch the entire talk below.

Complement this video with George Orwell’s essay on ‘The Politics of the English Language‘ to understand how language affects how we think and talk about things happening around us.

Interested in learning about writing and legal research? Check out our course here.

If you wish to write for us, or have a story to share, please get in touch at umang.poddar@lawctopus.com

Disclaimer: We try to ensure that the information we post on Lawctopus is accurate. However, despite our best efforts, some of the content may contain errors. You can trust us, but please conduct your own checks too.
Categories: Academic Blogs, Blogs, News, Advice, Career Advice

Umang Poddar
Umang graduated from NUJS in 2019. After that, he worked at L&L Partners before taking up the role of an Editorial Head at Lawctopus. You can find him on Twitter @UmangPod, and read some of his other writings at twodsinapodd.wordpress.com.