If you have decided to start and end your professional career as an associate in a law firm, you may resume surfing the net for jobs or titillation.

On the mischance that you decide to go into independent practice or start a firm on your own, especially in Kolkata, you may find this installment to be of interest.

You are not into the profession just for charity or to be Clarence Darrow. You want to become independent, perhaps pay off an educational loan or look after your parents or at least augment their income; more frequently there is someone to whom your word is ‘trothed and you must therefore marry her before the year is out: yet man (or for that matter woman) cannot live on hot air, sex and romance.

You all need money. That has to come from the profession that you have chosen.

A typical Catch 22 situation when you see a class-mate, not particularly brilliant, putting on his gown and then breezing into a court room with his first brief, coming back in the evening with loads of backsheets and papers for drafts to be done.

The fact that his father is a sitting Judge has nothing to do with it. I am sure all the solicitors suddenly found out that this fresh law graduate with a pathetic grade point average is actually the next Soli Sorabjee or Fali Nariman—at the same time.

It rankles for those who are first generation lawyers, I am sure. I wouldn’t know. I have had a privileged background. Yet I can guess.

Well then, you have managed to impress one of the friends of your father and got a case or someone from the locality has seen your shingle and after having lost or been overcharged everywhere else has come to you with his life’s worth: a case that will make or break him; perhaps a mortgage on his house and office, perhaps a disciplinary proceeding at work. Something that is really important to him, and thus to you, since it is your first case.

You put in long-man-hours, you research like crazy, the online free law-sites and law libraries now reek of your unwashed and regular presence, the legal notepads beside you look like first drafts of Nobel-winning theories.

You have read thousands of pages of correspondence, show causes, contracts, statutes, rules, regulations, directives, circulars, policy notes and perhaps even the Law Commission Reports and the 5 Year plans apart from the Constitution of India, the Code of Civil Procedure, the Indian Contract Act, the Indian Evidence Act…whew, I have become tired enumerating the stuff you have had to actually read.

You have had at least ten conferences with the client (more correctly consultations, since conference refers to what you, an advocate, have with quondam counsel and not the client) and finally you are ready to draft your magnum opus; perhaps your opus primus.

It is at this stage that the ugly head of practicality rears its head. The last two weeks you have ignored even basic hygiene to prepare yourself to be able to do the work.

You are going to draft what you have to do, file it in court or represent your client before a forum, domestic or public, and if necessary you are going to argue his case for him.

So all this work that you did and all that you would do and the money you have already spent as expenses (including library fees, taxi fares, photocopying and taking printouts): who is going to pay for it and when? 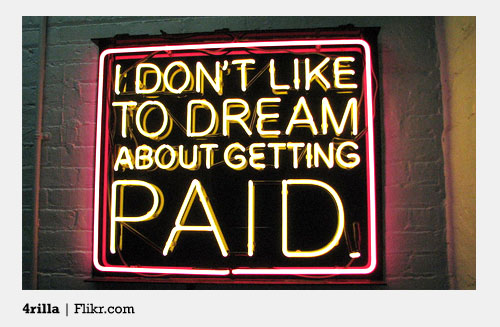 Of course the simplest, boldest and most honest approach would be to ask your client for cost plus, or some money on account after giving him a ball-park estimate.

Yet we have already established that you are not the sort of a person to whom clients actually throng: you are really afraid that if you do importune the client for fees, perhaps he will take his custom elsewhere in a huff, alongwith all the work that you have done, WITHOUT PAYING FOR IT.

Even if you have established yourself, unless you ensure that your fees and expenses are paid up front, at least as advance or on-account, you can never be sure that the work that you do on credit will be compensated for or the expenses would be reimbursed.

The client may defer payment and delay meeting you for the purpose for so long that when you meet him next you will be hard put to recognize him. The client may ultimately not pay at all; he may try to settle your bill at a fraction of what you have charged him.

All this happens to junior advocates in Kolkata. In the meanwhile, your bills have to be paid and the commitments you made, to the clerk, to the guy who runs the photocopy shop, to your staff, have to be fulfilled. You have to reimburse yourself for the court fees stamp that you purchased.

As a start-up you need to know what the market will bear and how much you can charge. Over the years, the erosion and escape of capital from West Bengal the scope of high ticket litigation has decreased. It is now very much of too few cases being chased by too many lawyers.

The laws of demand and supply apply. The lawyers often compete with each other in lowering their fees to get clients. This is the ground reality. In the category of cases I have enumerated, there is always a side with a lot more bargaining power and the other side, which is a pygmy by comparison. Guess who gets to represent the pygmy?

Whether you get Croesus or Tyrion Lannister, the result is that your client knows how much is usually charged by lawyers of different categories for the work in question.

He knows for example that a demand notice under the SARFAESI Act, 2002 is usually written in bulk by the bank’s retained lawyers at five hundred bucks a shot, if that much, and the reply is written by junior advocates at fees between three hundred and forty rupees to five hundred and ten rupees (for some inexplicable reason, in Kolkata we still bill by the archaic system of Gold Mohurrs—called GMs—which are valued at Rs.17).

So if you, on opening up a law-firm, quote Rs.25,000/- to your corporate client for a reply to such a notice or for drafting a winding up notice, the chances are that it would be the last time you would hear from the client, though the client will have a lot to say about you, usually over lunch or cocktails at the club.

He knows that an average nationalized Bank gives the retained lawyer a maximum of Rs.6,500/- for the entire duration of an original application made before the Learned Debts Recovery Tribunal under the Recovery of Debts due to Banks and Financial Institutions Act, 1993 and unless you can generate counsel fees by engaging highly paid counsel for most of the dates, that is all you get.

What arrangement you enter with the learned counsel is always sub rosa. So if you, a young lawyer, impress a highly placed executive in the bank’s law cell or recovery department, and then ask for Rs.50,000/- as initial deposit for handling an Original Application you are not likely to get the Bank’s retainer-ship or work.

There must be an answer: some way where a young lawyer manages to get paid for the work he does, whether as the owner of a law-firm or an independent practitioner.

There are some ways which have worked over the years, some which are as yet untried. I would love to relate them all but this has become very unwieldy as it is.

Why don’t I come back next week after the Pujas, and see what you law students have been able come up with and then add my quack remedies to it? Feel free to comment.

2 Gaj Ki Doori Ham Sabke Liye Zaroori. Share this information and help us to help you.

A healthy mind is a healthy you. For psychosocial support, please call NIMHANS toll free helpline #080-46110007.

This is a time for self-reflection, for all of us involved in the #COVID19 response to look in the mirror; to look at the world we live in and to find ways to strengthen our collaboration as we work together to save lives and bring this pandemic under control.

#COVID19 has taken so much from us. Its magnitude has touched virtually everyone in the world and clearly deserves a commensurate evaluation, which is also giving us an opportunity to break with the past and build back better.

Thank you honourable @HelenClarkNZ & @MaEllenSirleaf for accepting to serve as co-chairs of the Independent panel for Pandemic Preparedness & Response. I couldn't imagine two more strong-minded leaders to guide us through this critical learning process from the #COVID19 response.