Internship is something quite different from the monotonous classroom lectures. The practical realm of law is an entirely distinct world in itself.

If not for this internship, I would have been devoid of getting the practical know-how things are done in the real world. I got the opportunity to do research on some extremely interesting topics that were a learning experience for sure.

How I discovered this Firm

Contacts – Yes, from someone to someone, and I landed up at the SJA Firm. Usually, Firm believes in keeping only Fresh Law Graduates who are selected after a personal interview and are ready to join the Firm for a long span as a member of The Legal Team of SJA and Partners.

The Firm has a nice well built office with adequate space for everyone. In my first impressions of the firm it promised to provide a great working environment, which were cent percent true.

All the PC’s were connected and from each desktop one could access all the files in each and every computer and there was a personal interaction network between all the advocates which reduced much hassle of sending and emailing files to each other.

All the files were alphabetically arranged in the office and on the whole the working was quite systematic and organised.

Mumbai in itself is a great place to work at and when one gets congenial and an amiable environment to work nothing can be better than that!

Working with people who are always ready to help and guide you in whatever you do and are modest enough to take even suggestions from you despite the fact that you are still a student who is at his learning stage, it becomes a journey that is amusing for it is a fusion of learning with enthusiasm. If one wishes to learn the A B C of litigation, this is the firm for a keen and enthusiast learner.!

This is essentially a partnership firm where Mr.Satish Aggarwal is an advocate practicing at the Bombay High Court, and to assist him there are a around 5-6 advocates who are a part of this firm.

They are generally fresh law graduates who did not have much experience but they were committed towards their work.

Here I had an opportunity to work on all types of cases.

Normally, we get to see  that either the Firm deals in some specialized field either Civil or Criminal or particularly in family matters or in land and property matters where we get restricted to the type of cases the Firm is handling.

But at this place, all kind of matters came up at the Desk from Criminal to Civil, family matters to the property disputes, Consumer matters also  and so on and so forth ( because the list actually doesn’t end here!). Hence, herein I’ve mentioned a brief account of some matters that I dealt with while on internship.

Criminal cases:  Essentially, I was given Research work after, Sir,   in person explained me the facts of the case and gave me the legal issues that I had to research upon.

In one interesting case wherein a person (the petitioner of one of the cases where [edited]  was the defense lawyer) had lodged a defamation case against him, as while defending one of his client in the Written Statement he had used the word ‘nuisance value’ for him.

In another case, there had been a gross error by the  Hon’ble Court as the Court had admitted new facts in a review that had been filed by the petitioner and the petitioner had falsely claimed to be a member of a partnership firm by creating a table in a Word Document.

The judge without checking the authenticity of the document gave the decision in his favour, which was shocking for us. As the judgement was given in a review application filed by the petitioner, the quint-essential question that lied before us was as to what remedy was there to our rescue or what legal options were available.

After thorough research I got to know the concept of miscellaneous petition.

There was one case, which although I couldn’t handle but was also in Sir’s huge basket of cases where [clients’ names edited] wherein I had to satisfy myself to learn more about the case just by reading the Complaint and the report by the Investigating Officer.

Public Interest Litigation : I also got an opportunity to draft a PIL single-handedly which was reviewed, amended  and finalized with minor changes by Sir.

The PIL was relating to the general interest of the Senior Citizens in the area the firm’s office was located. For the filing of the PIL I got a chance to visit The Bombay High Court.

I also came to know what all documents and formalities had to be complied with before filing of a PIL.

Before drafting the Written Submissions I had to extensively research on topics.

While drafting the Written submissions I actually learnt that how the SC was fulfilling its constitutional mandate of safeguarding the interests of the citizens. Along with that, I came across the plight of people, how they have to face botheration and predicaments at every step in the process of lodging their Insurance Claims.

The thought provoking law point that I came across was that despite the person was using his registered personal vehicle for the purpose of hire-reward that was explicitly in violation of the insurance policy.

Visits to the Court

Although primarily I was provided with Research work  and drafting but keeping in mind that I could get an insight of the Court Room, I was also sent to the Bombay City Civil Court and The Bombay High Court along with an advocate.

I was on my toes to visit the High Court and after observing the basic filing procedure at the City Civil Court, how the affirmation takes place and such small yet significant procedures were observed where I kept perturbing the Advocate with my trivial questions as to why all this was necessary. 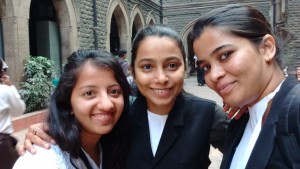 After visiting the City Civil we finally went to the High Court. I was glad to reach the High Court, where I was amazed to see the Old architecture Building that reflected the era of the Britishers.

It was a day that is one of the best memories when I actually felt as if I’m already a part and parcel of this esteemed profession.

The entire office once in a month on a day when the Courts were closed, planned a pot-lunch where everyone in the office brought food from their homes and everyone sat together and had a great meal (which I believe is a nice concept).

There I tasted some extremely epicurian food that included Tiranga Paranthas, Rice Pakoras, Oondhiyo ( a purely and Marwari Rajasthani) recipe, Garlic Bread stick prepared at home, all mouth-watering. Such small events brought made me affable with the other advocates day by day and it felt as if it had been months I’d been with them.

As a new year gift, everyone at the Firm had decided to take everyone for a trip to Nasik which is Around 200 km from Mumbai. All the advocates at the office and Sir with his family went on a 1 night and 2 day trip to Nasik. The entire experience was extremely enjoyable.

At night, we had our stay at a tent- house where at night we had a bon-fire and played numerous games. The other day we visited Sula Vineyards (a great place to visit) and a famous fort and left for Mumbai afterwards. 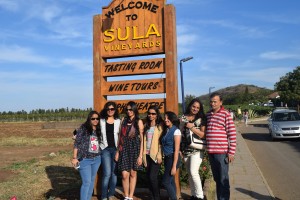 Visiting Sula Vineyards was an enthralling experience. The lush-green vineyards and nearby there was a small lake, and the entire view when seen from the first floor of the building was breathtaking. There we got an opportunity to see how the grapes were fermented and alcohol and its products were produced.

There was a guide who explained the process in detail and showed us how it was manufactured at a temperature of -18 Degree Celsius.

There I inquired about a peculiar thing that I observed, the vineyards where there were  green grapes were quite bushy and had a lot more leaves in comparison to the ones where black grapes were grown.

The guide there after pondering and discussing with his head explained the reason for the same. He told me that the black grapes require a lot more sunlight in contrast to the green grapes, so that was the rationality why the black grapes had less leaves.

Best part of the Internship

Discussions: Long Legal discussions on how to deal with clients (this actually requires real patience!), legal issues, how to argue the case, what tactics a lawyer requires, intriguing stories of cases that sir had dealt with, and last but not the least the grilling sessions by the judges.

Some things I disliked

Voucher System: All the advocates who visited the Courts the expenses were written on every Saturday had to write their expenses of their Courts for their reimbursement, as a consequence a lot of time was wasted in such unproductive work.

Job Satisfaction and lack of Discipline: Somehow I observed that the advocates who were working were not satisfied with their pay-scale or had some issues and hence wasted their precious time in long talks, which was a continuous disturbance for me while working.

Albeit, I had a short-internship of around 3 weeks from 21st December 2015 to 14th January 2016, there was a lot that I was able to learn and I have no regrets that I did not receive a stipend.

I look forward to intern at this place again if ever I get a chance for there was a lot more that I could learn and add more to my knowledge and experience.