Law Mantra (headquarters New Delhi) (Registration No 150 in Book No.4 Vol No 3, 603 0f 2018) is not for profit organisation running for the purpose of enhancing legal academics and legal awareness in the society and in the practice of the same. Law Mantra is a registered society under the Indian Trust Act, 1882.

The Indian Law Institute, New Delhi is a Deemed University and socio-legal research institute, founded in 1956. Established in New Delhi, primarily with the objective of promoting and conducting legal research, education and training.

The Himachal Pradesh National Law University (HPNLU, Shimla), was established by the State Government in the year 2016, by an Act of the Legislature (Act 16 of 2016). The University started functioning from 5th of October, 2016.

The most traditional dispute-resolution process of our civil justice system is litigation and trial with a judge or jury deciding who is right or wrong – where someone wins and someone loses. However, there are many other options available. Mediation, Conciliation and Arbitration – often called ADR or alternative dispute resolution- are the most well-known involved.

Alternative Dispute Resolution (ADR) is of great significance at a time when lawsuits are increasing and courts are facing a vast backlog of cases. The word Alternative can be misinterpreted to imply that something is not right with the present system.

ADR is necessary in the present time especially in India where 30 million cases are reportedly pending.

The entire objective of ADR is to bring speedy Justice and to reduce the backlog so that the Judges are free to apply their mind and devote their time to other important cases where there is lack of precedent or for writ petition, Public Interest Litigation and in many criminal cases.

The family as the smallest unit of the larger society is often under a recurrent attack of dissolution, separation and all forms of conflict.

The rate of divorce in the world is becoming alarming and geometrical in the calculation. It is of a fact that most young marriages end up in a divorce between one to six months of celebration.

The court through the traditional method of litigation is often bedevilled with a countless number of matrimonial causes ranging from marriage dissolution, order for nullity of marriage, nullity of a voidable marriage, judicial separation, restitution of conjugal rights, jactitation of marriage etc.

But the most astounding thing about all these forms of marriage conflicts is that it is a private family affair which can best be resolved through Alternative Dispute Resolution Mechanisms. And since conflict is inherent in the development of any society, conflict resolution is equally important to the survival of that society

ADR is becoming a fact of life. Instead of waiting for the case to proceed through the litigation process, people suggest their clients to select mediators or arbitrators to have their case resolved as efficiently and with as little bad blood as possible.

In today’s era, people can and should seek to make a difference in the working of Judiciary and promoting ADR, especially in Matrimonial and other civil matters. This shall indeed seek to provide them with fair, just and expedient resolutions of their problems.

Note: These Themes are not exhaustive; Authors are open to work on any topic related to the above-mentioned theme.

Both Author and Co-Author have to register.

The registration fee for attending the seminar:

The brochure is here.

The registration form is here. 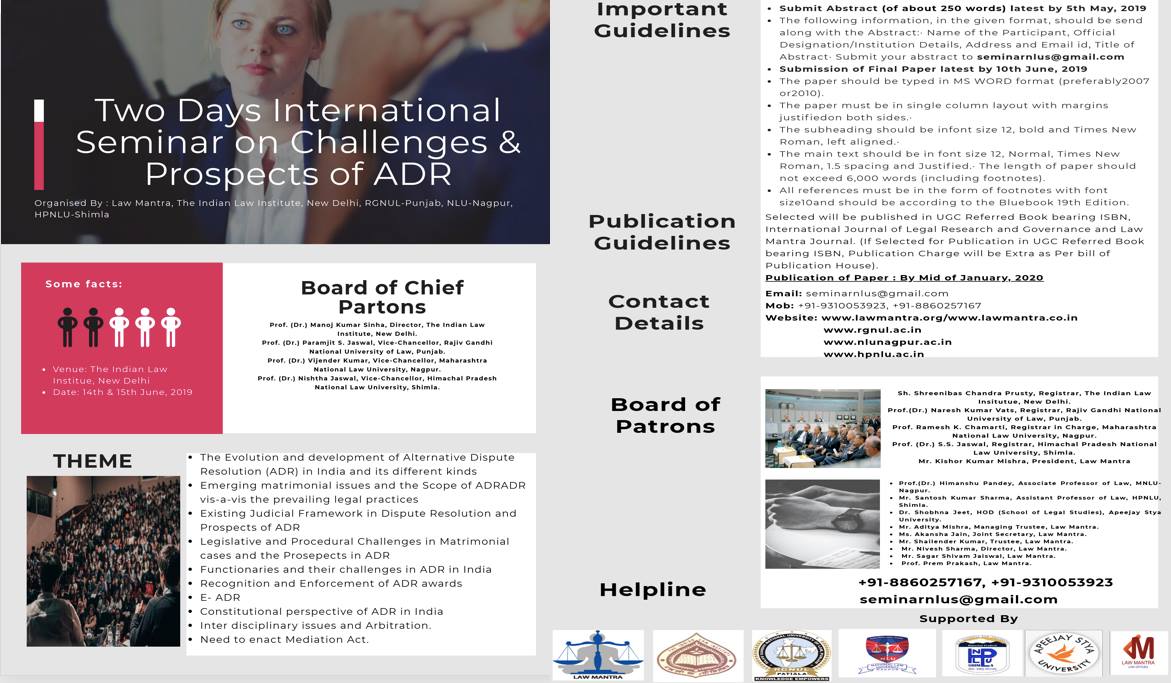 Can you #uncramble these words to answer the #AB_HealthAndWellnessCentre #Quiz?

👏👏👏 to #ASHA Annapurna from Tunganagar, #Shivamogga District, for her sustained social activism against child marriage and other #ASHAs from #Karnataka for ensuring communities have access to healthcare amid #COVID19. #HumHaiASHA @ANI

WHO accepted the recommendation from the Solidarity Trial’s International Steering Committee to discontinue the trial’s hydroxychloroquine and the lopinavir/ritonavir arms.

1️⃣ Stay home when you are sick. If you have fever, cough & breathing difficulty, seek medical care early
2️⃣ Clean your 👐 regularly
3️⃣ Wear a 😷 where distancing is not possible
4️⃣ Keep at least 1m distance from others

We all can help stopping COVID-19 from spreading.

The safety of #healthworkers is interlinked 🔗 to #PatientSafety.

Let's support the dedicated & hard working 👩‍⚕️🧑🏾‍⚕️👩🏻‍⚕️ around the 🌐 & prioritize their safety.

Join #WorldPatientSafetyDay on 17 September & “Speak up for Health Worker Safety!"

.@WHO's mission includes serving the vulnerable. Here is how we are working with partners and enhancing support to the #COVID19 response in #Rohingya Camps in Cox’s Bazar: https://bit.ly/3gbufPS. Together!