By Deepshi Singh and Tanuj Kalia

Because this time the Supreme Court Registry has chosen to not follow the conventional method of publishing names of the selected candidates on the website and has instead informed the candidates in person via an SMS.

According to the announcement, 877 students took the exam.

One of the candidates, who doesn’t wish to be named, received an SMS at around 7:29 pm today (July 3) which confirmed his/her selection to the interview.

The screenshot of the same is appended in the post.

Editor’s note: We have verified the identity of the person concerned.

Update [July 4, 4.43 AM]: We have confirmed the news with one other candidate.

The SMS also mentioned the date and time (6th of July, 12.30 PM) on which the interview is scheduled. However, the SMS doesn’t disclose the marks/score achieved by the candidate.

Such “private” communication puts a question on the transparency in the selection process adopted by the Supreme Court Registry.

Update [July 4, 10.35 AM]: Candidates have been sent SMSs meant for other candidates with the SMS addressing the candidate as someone else. This raises serious concerns about the logistical preparedness of the Registry in conducting the exam.

Also, a 2-3 day notice to appear for an interview seems woefully short.

If you have received such an SMS (especially if you are NOT from the NCR region), do let us know in a comment below.

Three questions for the SC Registry:

1. Why has there been no public announcement that the results have been declared? Why have the results not been displayed on the SC website?

2. Why have the scores of the candidates not been mentioned in the SMS?

3. Is it fair and just to expect candidates to make it for an interview with a 2-3 days notice? 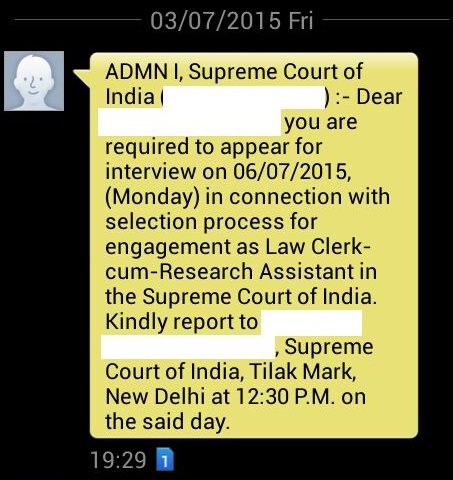