Mr. Ram Jethmalani was one of India’s top lawyers known to be a cross-examiner par excellent, an outstanding advocate and a crusader for social justice. His biography was recently published and launched by the Hon‘ble Chief Justice of India.

He shot to fame after appearing in the K. M. Nanavati Case and was in the news for standing up against corruption in the Black Money Case.

India’s flamboyant legal eagle took out time out to share his insights in a one to one interview at his Akbar Road residence with Delhi University Law Graduate, Manushi Satyajeet Desai.

The interview, taken back in 2015, was first published here.

What does it take to be a good lawyer?

One should learn to distinguish the profession from a business.

In a profession, money-making is not the important object – although people sometimes make more money than they should, but that’s not the point. The point is that one has to ALWAYS have the notion that the legal profession is a method of service to the public.

How was it when you started? What do you think of the current legal system and the dearth of good lawyers?

Nobody wants your service free. If you offer free service, people will think that the man is trying to build business for themselves. And today our whole legal aid system as you call it, organized by the bar, the court or the government is a sham.

They don’t give the best lawyers to a poor litigant. They are in fact, making experiments between the law and the poor people.

When I was the Chairman of the Bar Council of India, I had drafted a Professional Rules of Conduct added to the existing Rules of Conduct – that it is the professional duty of every lawyer within the economic capacity to render free legal aid to those who stand in need of it and this is the professional obligation more of seniors whose assistance is required by the poor people who sometimes get in the middle of some unfair litigation where only a good lawyer can be of help.

Also, only those persons should take the law who do not regard the practice of law as a business.

What is the secret behind making money in the profession?

I have finished more than 75 years of my practice and I make a good bit of money, certainly not like a lot of top lawyers, some of whom are too business-minded. I

do make money but I make it from 10% of my clients while 90 % work is free work, no fees. That’s the way I serve the people.

Your advice for future lawyers.

Law is a profession, the practice of which requires tremendous industry.

You must be capable when you are young to put in about 15-16 hours of work.

If you are not capable of that kind of industry, then you should take to some other kind of profession or business.

What should a law student learn to start off well?

A lawyer who only knows the law is a mason, what you need to be is that you should be an architect.

Justice does not ultimately depend on law, it depends on facts. And the lawyer must know not only law but a smattering of everything.

History, philosophy, science, logic, languages, a lawyer must realize that ultimately advocacy consists in persuading a judge with your oral argument. The more command over language you have, the more persuasive you can be and that puts you ahead of your rivals.

What makes an honest lawyer?

When you appear for a client, your duty is not only to the lawyer but also to the appellant. Morality consists not in obeying the law, but in carrying out that which is not enforceable by the law.

In other words, for example if a lawyer promises the other lawyer that the next day I will consent to an adjournment, this promise is not capable of enforcement, but it is his duty to keep that promise – as a lawyer, as a gentleman.

Observance of that which is unenforceable is the highest form of morality.

What should law students do to be the role models in society? What is an important trait to develop as a law student? How should we start to get there?

In my lectures to law students and sometimes even practicing lawyers, I told them that the spiritual ancestor of the legal profession is a character in the Biblical stories, the story of Danielle and Suzzana.

They say that Babylon was ruled by a council of elders like in the modern panchayat – the oldest persons were the rulers of administration. But, there lived in ancient Babylon, a woman of almost breathtaking beauty.

So, each of the old men passed a lecherous glance at her and tried to seduce her but the virtue of this woman was stronger than the solicitations of these old men.

They brought a false charge against her and naturally the accusers, the complainants and the judges were all rolled into one; therefore these four old men succeeded. So no wonder the poor woman was found guilty, charged with adultery of a young man unknown.

And in those days the practice used to be that the person who was sentenced to death as she was, was to be stoned to death. So, they say that a crowd had collected to see the blood of the woman flow but before the first stone was tossed there arose from the audience a young man called Danielle. Danielle said, “I don’t believe this woman is guilty” and he kicked up a row.

Danielle was the first lawyer in history.

So, the essence that you draw from this: he worked without a fee, he fought against the establishment, against the power – the ruling power, he fought for justice, and he did not mind what the people will think of him. 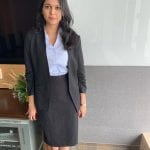 is a lawyer practicing in the High Court of Gujarat.