It’s been sometime since I last wrote here.

It’s not because I am tremendously busy – quite the opposite in fact; I have been gainfully unemployed as usual at the High Court.

Rather, I was wracking my brains to find something to share which you will not get with a simple Google™ search on the internet.

I was reminded this morning of something that I would have given my eyeteeth to know when I was a junior.

It happened when a junior friend – about 12 years old in the profession – came over to ask me whether I could draft an application for stay in connection with an appeal within the day.

According to him, the solicitor wanted the draft that evening, and they were supposed to file it on Monday and he could not for his life, understand how this could be done, since he usually took around two days to draft an application and then revise it.

He was desperate because today was Valentine’s Day and he had to devote at least six hours to the lady who made the sun rise in his life – and most probably prevented it from setting. So he simply did not have the time.

I could have asked him why he was worried, since today was Saturday and the filing was not till Monday.

Yet I did not because I knew solicitors are not really interested in the date of filing – unless limitation is running – but more concerned about showing their lay client that the work has been done, if possible before it has begun!

When you are a junior lawyer, and depend upon the none-too-reliable good will of solicitors for your briefs you do not have the luxury of taking a magisterial attitude and lecture your advocate on record that a quality draft requires time or that even child birth takes nine months and investment of more money or men could not bring the time down to an hour.

At least not with today’s technology – the cloning brigade will correct me if I am wrong.

However, over the years, I have developed a method which can reduce the toughest of applications for stay in connection with an appeal to a forty minute interlude between other things you have to do. If you are the appellant, that means you are really ticked off (I did not use the ‘p’ word since after all, you, constant reader, may have delicate sensibilities) by the Order that you have appealed against. It may be a dismissal (if you are the petitioner) or an order allowing the writ petition (if you are a Respondent).

After the cause title of the stay application (The High Court of Judicature at such and such, followed by Civil Appellate Jurisdiction and the Side – Appellate or Original – the number that the case will bear, that it is in the matter of an appeal, variously described as FMAT or MAT or Civil Miscellaneous Appeal, or Civil Appeal (Writ) depending upon where you are practising and that this application is for stay of such and such order passed in such and such writ petition passed by His Lordship the Hon’ble Justice So and So) you set forth the names of the parties exactly as they are in the Memorandum of Appeal.

Then there is the greeting (“To the Hon’ble Mr./Mrs. _________, Chief Justice and His/ Her Companion Justices of the said Hon’ble Court”) whereafter it is customary to write “The humble petition on behalf of the Appellant/Petitioner abovenamed Most Respectfully” in half margin, and then from the absolute left of the page “S H W E T H:-“

The fun starts thereafter. In the first paragraph simply write who filed what against whom and then set out the prayers. Enclose a copy of the writ petition at the end of the paragraph and mark it as an ‘annexure’.

Write that the Petitioner will crave leave to refer to a copy of the petition with all annexures/ enclosures at the time of hearing.

The best thing about this short-cut is that you do not have to explain or set out any part of the writ petition or the enclosures in the body of the petition unless you want to. In the eye of law, you have written what you have to write.

Then state that the petition was moved on service – and what happened on the first day that it was heard.

If it was a dismissal at the first instance your work is lessened, because you can then simply say that the Hon’ble Court, by an Order dated such and such, was pleased to dismiss the writ petition and then annex a copy of the order and say you will crave reference to it at the time of hearing to ascertain its true scope, meaning and effect.

If however on that date, directions were given for filing affidavits, simply state that, and then say that the parties exchanged their affidavits and annex copies of the affidavits and crave leave to refer to them at the time of hearing.

Make sure that you write that the allegations contained in the affidavit of the other side are all false as to material particulars and were duly denied by the Petitioner in his affidavit (whether in reply or rejoinder, whatever it is called in the Court where you practise).

Then say “Despite the aforesaid the Hon’ble Court, coram His Lordship the Hon’ble Justice ‘such and such’ was pleased, by an Order dated (fill in) was pleased to (either dismiss the petition or allow it) and then annex a copy of the Order and crave leave to refer to it to ascertain its true meaning and effect.

Till now alright – but how will you, in such a short time, be able to narrate in the petition everything that is wrong about the order, why you have a prima facie case and the thousand other things that you have read must be written in an application for stay in order to try and get a stay?

I have a small but fast shortcut. Simply write that the Petitioner is aggrieved with the order because of the following, among other, reasons, and then set out each ground contained in the Memorandum of Appeal, replacing the ‘for that’ or ‘because’ with which each ground begins with something more grammatical.

It would tell the Court all the points of fact and law that you are referring to.

Then there are only the formal paragraphs left – that you have preferred a Memorandum of Appeal on the grounds that appear more fully from a copy of the memorandum of appeal to which you crave reference, why during the pendency of the appeal you require the interim stay that you have sought, the usual averments of a strong prima facie case and the preponderance of balance of convenience and urgency, and any other particular thing that the rules of your Court require you to aver.

Then there are the prayers.

Alternatively, you may decide to set out the facts of the case from the writ petition or your counter affidavit (depending upon whether you filed the writ petition or were opposing it) and after the facts are over, you can incorporate, from the next paragraph, everything I have said above about what the body of the application ought to contain except the summary of your case, since its already been pleaded.

Even though this is less elegant, it may give you the satisfaction of having made out your entire case before the Hon’ble Appellate Court in your stay application. Might help you in the higher forum also!

I told my junior friend much of what I have written. He went back very satisfied.

A few minutes back (because its now evening and he came in the morning) he called me up to say that he had completed the draft in the way I had said in forty minutes after he had returned to his chambers and the solicitor was very happy with the draft. 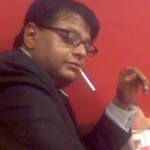 Mr. Protik Prokash Banerji, popularly called Protik da by law students is an advocate at the Kolkata HC. Interning at his chambers is an experience of a life time. People who learn drafting and oratory skills from him swear by the excellent teacher he is. He talks about movies and literature as authoritatively as he talks on law and wrote on such subjects for the Economic Times in 1994-1995.

PS- He strongly advises everyone not to smoke.

"Every person needs to look at their #COVID19 risk.”
-@DrMikeRyan

60% of all #COVID19 cases so far have been reported just in the past month. We'll never get tired of saying that the best way out of this pandemic is a comprehensive approach.
Not testing alone.
Not physical distancing alone.
Not contact tracing alone.
Not masks alone.
Do it all. https://twitter.com/who/status/1278349087167873025

"Every person needs to look at their #COVID19 risk.”
-@DrMikeRyan

WHO and @UN_Women are Global Leaders of the #GenerationEquality Action Coalition on ending gender-based violence https://bit.ly/2YOyOKl