A two day workshop is being conducted at the West Bengal National University of Juridical Sciences, Kolkata (NUJS) in collaboration with the Increasing Diversity through Increasing Access (IDIA)

The West Bengal National University of Juridical Sciences, Kolkata (NUJS) in collaboration with the Increasing Diversity through Increasing Access (IDIA) through this workshop seeks to provide an opportunity to law students and students who generally have a leaning towards legal studies an experience that will help them develop a skill set that helps them succeed in a career in law or in law school.

I. A career in law

Tanmai Shukla:  Tanmai is well known for his leadership wherein he headed the Campus Recruitment Committee 2018-19 to achieve the highest placement record in its history and has also been a part of the Recruitment and Placement Committee. Apart from this he has served in the Campus recruitment committee and the Student Juridical Association and has been recruited by the ICICI.

He will be joined by an associate from a law firm during the session for the conduct of the same.

Mahima Cholera: Mahima Cholera is one of the most sought after moot mentor in NUJS and had been the co-convenor of the Moot Court Society. She has participated twice in the Vis East Moot and is currently a part of the Jessup team that is set to represent the university.

Vinayak Chawla: Vinayak Chawla is known to be one the most amicable and jovial moot mentors of NUJS. He was the convenor of the Moot Court Society for the year 2017-18. He is known in the mooting circle for his recent phenomenal victory and the speaker award he received in the ICC Moot court competition. Apart from this he had participated in Vis East and won the honorary mention as a speaker and was also a part of the winning team of the HNLU Moot court competition

Nikhil Iyer:  Nikhil, is well known for his illustrious debating career. Winning IIT Bombay 2018, CNLU 2018, Prologue 2018 and core adjudicator in Heritage 2018, IIT G Debate 2019 are a few among the many debating achievements of his. He is also known for being one of the most approachable debating mentors in campus and has contributed immensely to the debating culture in the university.

Suchishubra Sarkar: Suchi, as she is fondly known is prominent in the debating circles for her remarkable achievements in the field and is a debating mentor well known for her incisive feedback. Breaking at the UADC, Winning at the Derozio debate and emerging as a finalist at the CNLU debate is just a small part of her noteworthy achievements and a stellar debating journey

Arbina Dey: Arbina is currently a part of the Recruitment and Placement Committee. Apart from being the co-team leader of the IDIA is also known for her research skills and was previously a grade A member of the NUJS Law review

Tejas Popat:  Tejas is known for his experience in the Recruitment and Placement Committee having served in it for a period of 2 years. Apart from this he is known for his phenomenal mooting achievements and contributions in the field of constitutional law

Pranjal Sinha: Pranjal is the founder of ODRways and is the youngest recipient of the JAMS fellowship for his contribution to mediation. He is also the Chief coordinator of the Indian Mediation week that has been widely recognised for its efforts

Akshetha Ashok: Akshetha is a partner in ODRways and the chief coordinator of the Indian Mediation Week and is known for her accolades in the field of mediation. She is also an accredited mediator from ADR-ODR International.

Sarath Mathew: Sarath is known for his excellent academic track record and his drafting skills. Being a JILS editor, Sarath has 4 publications in total (one journal, one chapter, one newspaper article, one blog). He is also currently heading the HSF Bridge project in college.

Drop in your queries at legalworkshopidia@gmail.com 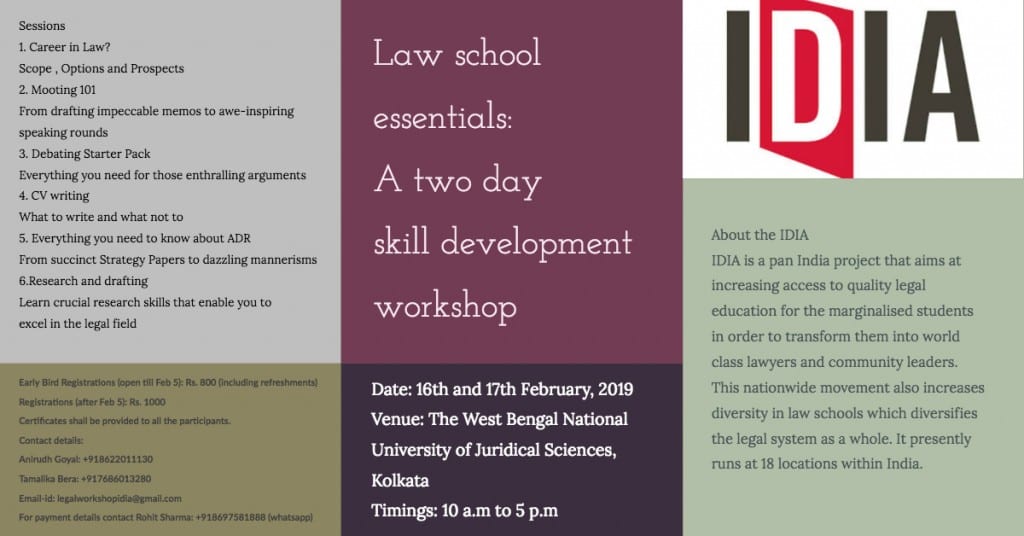