Lex Macula is organising a webinar on Significance of Constitutional Values in the 21st Century on 27th December 2020.

Lex Macula is a registered NGO under the Societies Registration Act, 1860. We are a youth organisation specializing in organizing moot courts, debates, seminars and other legal competitions for a much better learning experience than what is offered to the law students.

Driven by a sense of excellence and talent in the young minds, a variety of mediums are provided to help students achieve perfectionism in every domain of the legal field. The vision at Lex Macula is based around equality of opportunity in the field of law. By creating a community of law students, all students are delivered an equal shot at growing and learning.

The topic ‘Significance of Constitutional Values in the 21st Century’ has so been chosen keeping in mind the various legislative changes that have taken place over the past year and the new Acts that have been brought into force by the Parliament. The Constitution of India is the highest authority of law in our country and through this lecture our esteemed speaker would shed a light on the values that it represents in a democratic nation like ours and how
acknowledging their significance in today’s time is of utmost importance.

Lordship’s take on the legislative changes, the Constitutional values as well as His perspective on the current
the socio-political situation in the country would be an enlightening opportunity for law students and legal professionals alike.

Hon’ble Mr. Justice Kurian Joseph became a judge of Supreme Court of India on 8th March 2013 and retired on 29th November 2018. Lordship had begun his legal career in as early as 1979. In 1996, he was designated as a Senior Advocate.

In his astounding career, Lordship has been the Chairman of the Indian Law Institute Kerala Branch, Chairman of
Indian Law Reports (Kerala Series) and Executive Member of NUALS (National University of Advanced Legal Studies). In 2000, Lordship was appointed as a Judge of the Kerala High Court. In February 2010, he was elevated as Chief Justice of the Himachal Pradesh High Court before finally being elevated to the Supreme Court of India, the Apex Court of our country, in 2013.

He has been a part of some very notable judgements. The bench of Justice R. M. Lodha, Justice Madan Lokur and Justice Joseph heard the controversial Coal Allocation Scam case and vowed to free the Central Bureau of Investigation (CBI) from any political and bureaucratic interference.

On August 22, 2017 Justice Joseph gave a verdict against the controversial Triple Talaq. In his judgement, he said: I find it extremely difficult to agree with the learned Chief Justice that the practice of triple talaq has to be considered integral to the religious denomination in question and that the same is part of their personal law”.

Another notable judgement by Lordship was when a bench of Chief Justice Lodha, Kurian Joseph and R. F. Nariman overruled the Afsal Guru decision on the point of admissibility of electronic evidence.

Medium: Via Video Conferencing (the details shall be sent via the confirmation email).

Fee: There is no registration fee for the event. All the participants who attend the session will be given an e-certificate. 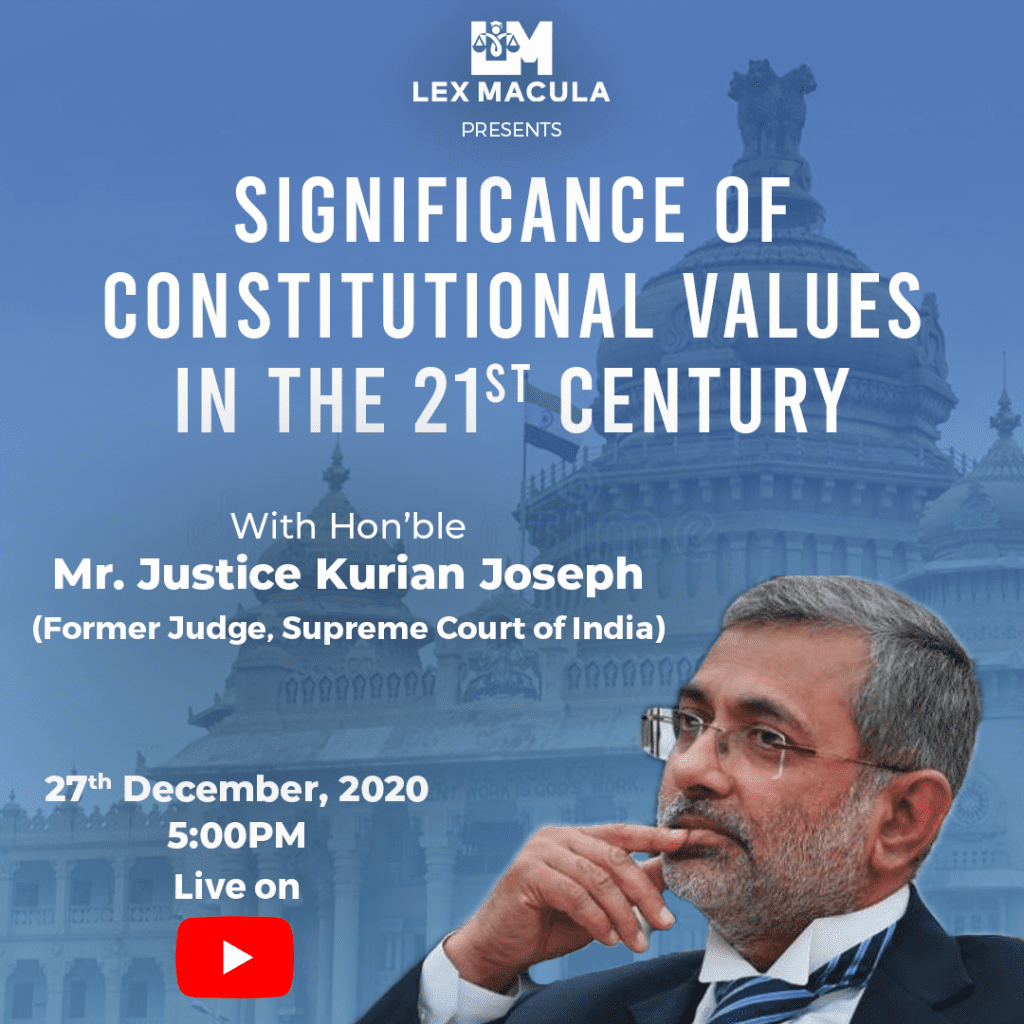