The Supreme Court Advocates-on-Record Association (SCAORA) organized the first national conference on 1 September 2018 in Plenary Hall, Vigyan Bhawan, New Delhi which was inaugurated by the President of India and presided over by the Chief Justice of India.

The theme of the conference was “Technology, Training and Infrastructure: Keys to Speedy Justice” & “The Changing Face of Legal Education in India”.

The guest of honour was Shri K.K. Venugopal, the Attorney General for India.

In his welcome address, Shri Shivaji M. Jadhav, President, SCAORA spoke about SCAORA and how it has been instrumental in asserting its voice on several issues of national importance like appointment of judges and safeguarding the independence of the judiciary like the Second Judges Case and the recent 2016 judgment commonly known as the NJAC case.

He also spoke about the welfare activities of SCAORA such as creation of the welfare scheme for advocates and their dependents for free medical insurance.

The inaugural programme was followed by felicitation of Justices Madan Lokur, U. U. Lalit, Ajay Khanvilkar, Indu Malhotra of the Supreme Court of India.

The conference had two working sessions. The first was on technology, training and infrastructure: keys to speedy justice. The second session was on the changing face of legal education in India.

SCAORA has also started an e-Journal which was launched by the Chief Justice of India during the conference. 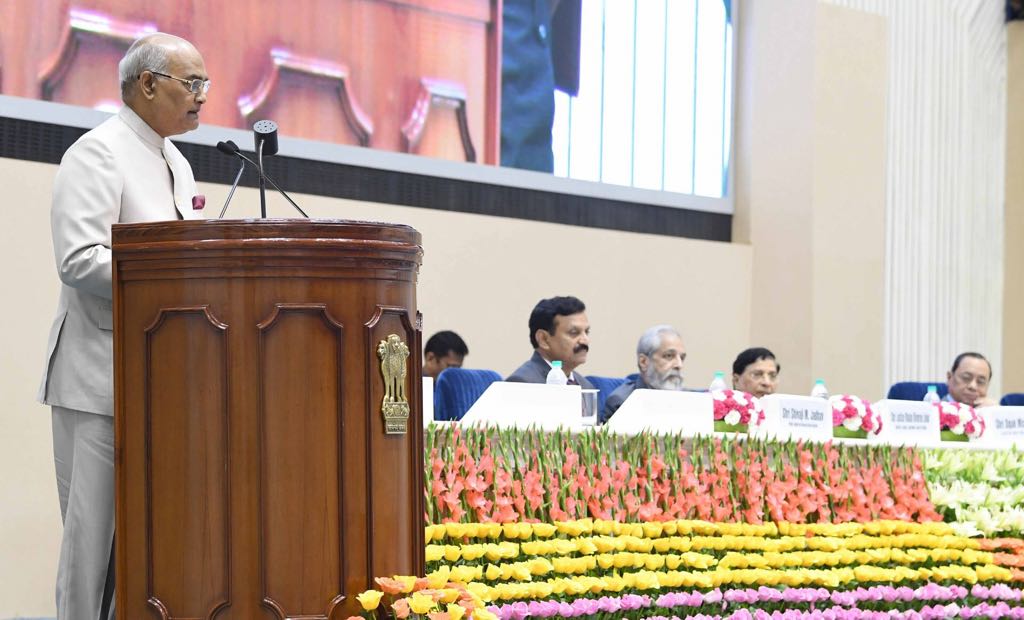 During the conference many delegates and participants spoke at length about different topics relating to the theme of the conference. Some of the key takeaways from the deliberations were as follows:

K.K. Venugopal (Attorney General for India) – made a interesting comment that the problems being faced by lawyers especially in Delhi to get premises on rent attributing it mainly to trust issues with respect to them!

He advised that lawyers should not go on strikes.

Justice Dipak Misra (Chief Justice of India) – stated that today young lawyers without much practice are able to address the court and technology and helped them to a great extent.

He proposed that use of technology should be made to push for administrative reforms to ensure speedy justice; strengthen managerial and operational support (court’s registry) including in scanning and copying of case files, allotment of cases, etc.

Skill building is an art and technology helps sustain this art. He said that majority of the population do not have access to justice and hence technology needs to play a greater role in tackling with this issue.

The primary concern is that without adequate infrastructure, access to justice also becomes difficult.

On technology related issues, he also said that artificial intelligence is secondary intelligence and we must take help but not totally rely on it.

Ram Nath Kovind (President of India) – Judges are overburdened by sheer volume of cases. Out of about 3.3 crores pending cases, 2.84 crores is in subordinate courts, 43 lakhs is in high courts and about 58,000 cases are pending in the Supreme Court of India.

There are many reasons for these – infrastructure gaps and considerable vacancies in subordinate courts.

The Bar Council of India can consider giving greater autonomy to private institutes of eminence to promoter better and reform further the legal education system.

Justice Ajay Manikrao Khanvilkar (Hon’ble Judge, Supreme Court of India) – He said that old timers require to be trained in new mechanisms of technology that has led to instant communication with clients.

Refresher courses should be organised for court staff. Pleadings should be succinct and to the point.

Shyam Divan (Senior Advocate, Supreme Court of India) – Pleadings should be drafted with clarity with shorter writing. Much more persuasion is required to be done through written briefs than oral arguments.

In today’s time and the emerging trend one should rely more on writing as there is no time for oral arguments. Emphasis should be laid towards moving away from oral arguments and they should be used only for nuances.

Chander Uday Singh (Senior Advocate, Supreme Court of India) – The need of the hour is for courts to use provisions of Section 30, 89, Orders 10, 11, 12 of the Civil Procedure Code, 1908 extensively.

Size of the pleadings should be reduced and cases where court deems fit should be asked to pursue mediation.

Debashis Khettry (editor, SCAORA e-Journal, Advocate-on-Record, Supreme Court of India and Principal of the law firm, Leslie & Khettry) – As part of legal education, training institutes should be set up in all states where retired Supreme Court and High Court judges can mentor law students on advocacy and court mannerisms. This can be useful for advocates and would be judges alike.

This can also be an alternative to internship programmes as many students are unable to get internships many a time.

Further, in relation to the vacancy of judges in higher courts, where fresh appointments are delayed due to various circumstances, then in accordance with constitutional provisions (such as Articles 128 and 224A of the Constitution of India), retired judges may be requested to sit and act as judges of the Supreme Court and High Courts respectively.

This practice is not being followed currently.

Meenakshi Arora (Senior Advocate, Supreme Court of India) – She said that lot of laws of relevance such as Insolvency and Bankruptcy Code, etc. were not there when many senior members of the bar studied law. It is important for them to be up-to date with these relevant laws.

Further, a lot of colleges (non-national law schools) have the same syllabus for decades which has not been revised with changing times.

She welcomed few changes however where there are examples of specialised laws such as petroleum laws being introduced in the curriculum of some colleges as specialisation is becoming key to legal practice.

Also, professors may not be in sync with what happens in real courts. Lawyers should accordingly find time to go to law schools and teach about what happens in practice.

Jaideep Gupta (Senior Advocate, Supreme Court of India) –  It is wrong to think that moot courts system in law schools is a complete mechanism for advocacy training. It helps in analysing a legal problem but what it doesn’t do is develop the skills to be applied by advocates in their presentation.

Old-timers provide their own interpretation of the law depending on the facts of the case, however, new age lawyers do a word-based search, note all the judgments on a particular point and base their arguments on that material. Old timers tend to think out of the box and bring new meaning to a case.

We should study constitutional developments in other countries and see how their constitutional principles developed vis-à-vis the jurisprudence in India.

In addition, law firms and lawyers should try and recruit approximately 5 students of various diverse backgrounds, especially from the weaker / more underprivileged sections of the society and train them for a year at their own cost and then release them.

This will not only help in creating more diversity but also be a mechanism for lawyers to give back something to the society.

She said that 5 year law schools should stress more on teaching subjects like CPC, CrPC in-depth including trial advocacy. She mentioned some efforts like project 39A and NUJS constitution committee / academic network.

Birds-eye view of basic education / rights must be given to citizens and students must be made to compulsorily go and create general awareness to public about their rights.

Justice Dhananjaya Yashwant Chandrachud (Hon’ble Judge, Supreme Court of India) – He narrated a story about how a young lawyer mistook the meaning of “ask for time” (an instruction given by his senior before appearing in court). The junior went and literally asked the judge what the time was which perplexed the judge. This shows the lack of practical advocacy and adequate training amongst young lawyers.

He cited Prof. Dr. Shamnad Basheer’s research on CLAT stating the lack of diversity in law schools in India. Further, the fees of CLAT is excessive and only 16% population has access to internet which restricts access to CLAT itself.

The questions in CLAT are from mainstream media and all of these curtail diversity and placing the weaker sections of the society at a disadvantage.

Unless we have good law teachers, good lawyers are difficult to create.

Further, there should be greater access to materials from other jurisdictions.

Finally, he said that it is generally the impression that law students prefer opting to go to law firms, but how do chamber lawyers conduct their recruitment? There is no open and transparent system in recruitments and it is generally connection based.

Further, there is absence of security for women lawyers in litigation including absence of equal access which points need to be addressed.

Pinky Anand (Additional Solicitor General, Supreme Court of India) – She said that there is a need to increase access to legal education but not at the cost of meritocracy.

The thresholds in some of the colleges for admission is as low as 35% marks and accordingly, the thresholds need to be increased.

NOTE: If your law college or organisation has hosted a conference, workshop, etc., do send us a write-up covering the ‘key insights’ of such a hosting.

In such a write-up, please keep the general introduction to a minimum, and instead focus on the interesting/insightful parts.

Market approval for Pneumococcal Polysaccharide Conjugate Vaccine given by DCGI.

The #Cities4Health #COVID19 Response Centre helps cities around the world in their fight against the virus.
Created by @WHO, @BloombergDotOrg & @VitalStrat, it provides weekly scientific updates, technical resources & tools https://bit.ly/3h0bsYh

"#COVID19 remains public enemy no. 1, but the actions of many governments and people don’t reflect this.

It shouldn’t be this way.

Every single leader, government and person can do their bit to break the chains of transmission and end the collective suffering"-@DrTedros

All over the 🌎🌍🌏, #healthworkers are fighting day and night to keep us safe from the #COVID19!