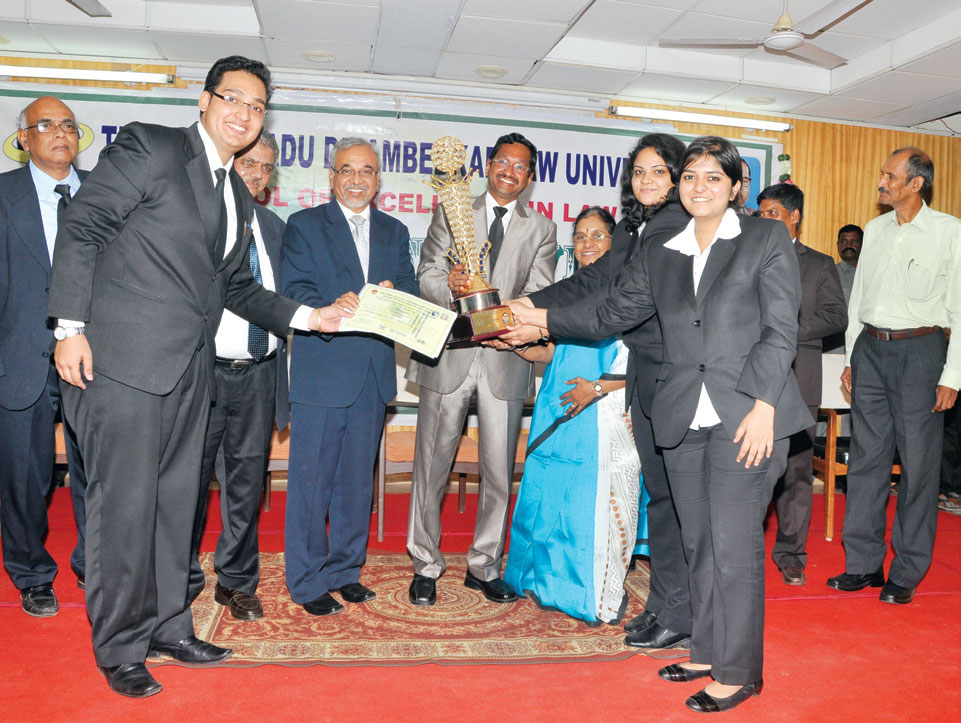 1. Hey guys, congratulations on your victory! Basic questions first, what made you choose the moot in the first place?

Environmental issues being the major concern for all and sundry across the world, inspired all three of us to grab the opportunity to take up the environmental moot being the most challenging topic to law students , as it is directly related to our basic fundamental and constitutional rights.

Notwithstanding the pressure of our internals and the first glance of the proposition initially gave us goose bumps yet we were determined to leave no stone unturned to add a feather on the cap of Symbiosis’s mooting achievements.

The problem was exhaustive as its each and every word was drafted in a manner which required brainstorming to modulate its facts.

Undoubtedly, tremendous research is inevitable in Environmental moot as it requires detailed study of various national and international environmental laws along with constitutional law.

Research validation was done by our seniors, time to time, that helped us to update the drafts which always required further specific and refined research work.

Also, the reinforcing part was solo research and cross functional research by three of us which enabled the team to get a winning edge.

Moreover, an innovative strategy which has been added to the moot arena by the moot court Association of our college by incorporating the Pleadings before the memorial submissions helped us to bring this resounding victory to the college.

Our forte was our camaraderie, the way we clicked as a team.

Being aware of each other’s strengths and weaknesses coupled with an equal amount of hard work and dedication worked for us and we were able to complement each other fairly well.

It’s a fait accompli; victories are the result of only team work that made us explore and cement each other’s strengths.

Following through with deadlines along with assignments and classes with bare minimum sleep was in a way, our biggest roadblock.

The issues which most of the time brought us at loggerheads made us clear various rounds since we were already prepared to volley of questions and counter arguments.

There were 32 teams in total.

It would be unfair to name one particular team as the toughest competition since all teams put up an equally challenging front as the competition progressed.

5. How was the final round up against?

The final round was against NLIU Bhopal.

They were a very good team and it was, quite frankly, exhilarating to compete with them in the finals since they put up a tough fight.

We would only like to say that mooting is great fun and every law student should give it a shot, even though they might not aspire to be litigants.

It is a very different form of learning. In other research assignments you can wander as per your ideology and present the case however, in a Moot you have to keep yourself confined to the requirements of the proposition.

Then you have to apply the law in a tactful manner so mooting opens up your mind and actually forces you to THINK.

The memos of the winning team can be accessed HERE.

Market approval for Pneumococcal Polysaccharide Conjugate Vaccine given by DCGI.

The #Cities4Health #COVID19 Response Centre helps cities around the world in their fight against the virus.
Created by @WHO, @BloombergDotOrg & @VitalStrat, it provides weekly scientific updates, technical resources & tools https://bit.ly/3h0bsYh

"#COVID19 remains public enemy no. 1, but the actions of many governments and people don’t reflect this.

It shouldn’t be this way.

Every single leader, government and person can do their bit to break the chains of transmission and end the collective suffering"-@DrTedros

All over the 🌎🌍🌏, #healthworkers are fighting day and night to keep us safe from the #COVID19!