Suhail Mathur, a student of NLU Delhi has written a book! That calls for celebration and an interview.

Here is the interview:

1. How and when did the idea of a book come about?

To be really honest…I always had the desire to pen down a book especially since not only would it provide a vent to my creative urges, it would also enable me to communicate with the masses at the same time.

Ever since I was a young boy, history; especially that of the revolutionaries, and mythology were the two topics that interested me immensely.

The triggering point however, was when I picked up a book written by one of the IIM students and being the proud law student that I am, thought to myself […] that is how THE BHAIRAV PUTRAS came into being.

2. Whom did you talk to about the idea? What did they say? How did they help?

Well, when the idea of THE BHAIRAV PUTRAS germinated in my mind, I quietly sat down and began typing out my manuscript on MS Word.

But yes, the moment I completed my first chapter, I went directly to my mother and read out the script to her with utmost eagerness.

Both, my father & mother, have been extremely supportive of my endeavour and so was our Vice Chancellor, Prof. Dr. Ranbir Singh, who encouraged me right from the initial stages of my work.

3. Tell us more about your book.

My book, titled THE BHAIRAV PUTRAS, is a fictional revolutionary adventure set in the pre independence era.

The story is based in a fictional town called Bhairavgarh where Lord Bhairava is the main deity.

In 1936, the Britishers set up their cantonment area and this leads to a series of events that unease, shock, and violate the sentiments of the townsfolk when Keshav (the protagonist), who is not your usual highly aggressive revolutionary but the Oxford returned son of a rich & powerful zamindar, carefully gathers a group of men from different walks of life and plans a revolution to defeat the British not just by guns or bullets but by wit and intellect as well.

4. Who are your publishers?Any tips for future writers?

Author’s Empire Publications. It is a young publishing house with great dynamism and has already managed to rope in some top literary figures within its fold.

THE BHAIRAV PUTRAS is already up for pre order on sites like Infibeam.com and Homeshop18.com and shall be released on 20th February 2014.

My publisher, Mr. Kunal Marathe, has been extremely supportive and it is always a pleasure to work with enthusiastic people like him.

In fact, I was amazed to know that several best sellers that we have seen in recent times, were originally self published and the author had to invest in them all by him/herself.

Having said that, I feel extremely proud to state that my manuscript was accepted by sixteen publishers, several of whom are the leading players in the market, and it is this fact which makes me confident of my book’s storyline and plot.

I would also like to thank THE BOOK BAKERS for designing my book cover and playing a conducive role in the publishing process. 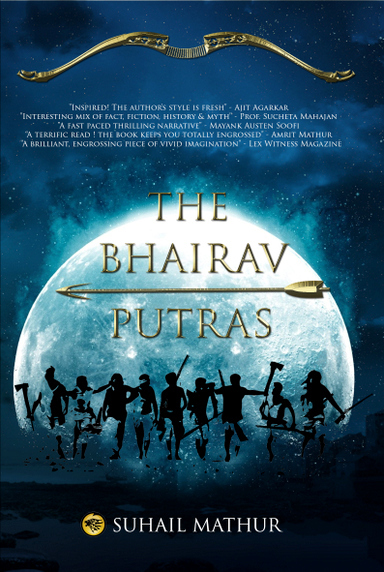 5. How long did it take for you to write the book?  Is there any ‘writing’ process you follow?

THE BHAIRAV PUTRAS is a grand and epic adventure so it took me exactly a year to complete the book.

I started writing it when I was in my second year and finished my work on the book exactly a year later in June.

As I stated before, the book owing to its theme, had to be written in a very intriguing and exciting manner while staying true to the concept and so, the word count is roughly around 97,000 words and the book would be around 330 pages in length.

6. What was the experience of the publishing process?

A very reputed publishing house […] sent their contract which stated that I needed to purchase 400 copies of my own book at MRP!

Another reputed player in the market sent me a mail stating that they had absolutely loved the concept but since I was a first time author, I would come under their self help scheme and they asked me to call them up. While I had already decided against signing the contract, the publisher blew my mind on stating that they would publish my book if I paid Rs. 2 Lakh to them!

I am indeed fortunate to be supported by THE BOOK BAKERS as well as my publisher, Author’s Empire Publications, who ensured I got a favourable contract.

Generally, the royalty varies anywhere between 5-10% at which the book is sold. 5% would be for a debuting author while a seasoned player would get 10%. Same goes for the advance.

A debuting author cannot generally expect to receive an advance as that would be risky for the publisher.

A lot of people ask me if I really want to pursue law and are actually pretty surprised when they get to know that a budding lawyer is making films or writing books.

This I find pretty amusing since several legal luminaries have written books and our current Law minister has even penned lyrics for a film. To label lawyers within a specific bracket is being unreasonable as I truly believe there is much more to their personality.

So yes, all these cultural activities aside, my aim is to become a successful corporate lawyer.

Heartfelt thanks to the #CoronaWarriors who protect us from #COVID19.

I informed my Swedish counterpart that India has made giant strides to eliminate #TB by 2025. I said
we also have an ambitious blueprint to place India as a global leader in digital health. Our Digital Health Program promises to integrate IT into the healthcare system.

Identifying the origin of emerging viral disease has proven complex in past epidemics in different countries. A well planned series of scientific researches will advance the understanding of animal reservoirs and the route of #COVID19 transmission to humans.

.@WHO experts will travel to #China this weekend to work together with their Chinese counterparts to prepare scientific plans for identifying the zoonotic source of #COVID19. The experts will develop the scope and terms of reference for a WHO-led international mission.

Excellent message from my chief of emergencies @DrMikeRyan .