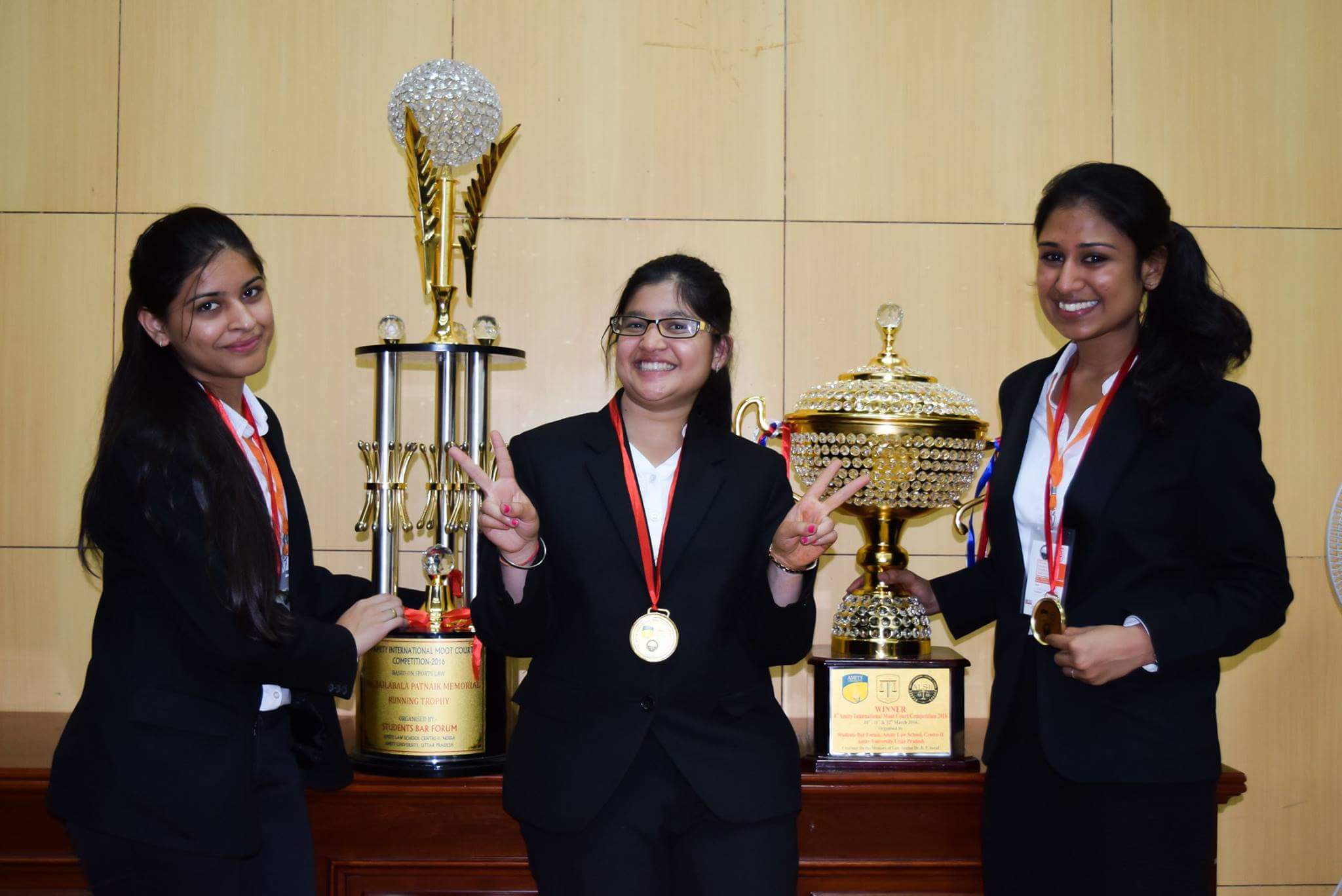 First of all congratulations for the win! What was the motivation behind choosing this moot?

It’s a very new domain. Sports law is something we generally don’t see and since we are a all girls team and it is generally perceived that sports is generally the area of men.

Just wanted to see if we could do it better than men, which I think we did. It is a very intriguing area in which the proposition was framed; it is not usually ventured into. So this intrigued us quite a bit which is why we took up this Moot court competition.

What was your preparation strategy? How did you go about it? How much time did you take in researching and everything?

It actually took a very long time because the proposition was very very complicated and we had to frame and plan many things and only after deleting everything the last option which was left was to go about it because of which we saw that there were many other nice ideas about what the pleading should have been and what the cases should have been.

It was a very intricate moot problem, very complicated and very difficult. Took us about a month to figure out the complete Moot Proposition.

Any problem you faced in the moot proposition?

Usually the issues are framed within the moot proposition but unlike that there was nothing as such here so we had to frame the issues ourselves. We had to understand the fact and then frame the issues. That was a very big challenge.

How were the competing teams? What mindset were they in about the Competition?

Actually every time we had a team opposite us, what they thought and what we were thinking was completely different, so we had to start afresh. We were sitting in the courtroom and we got their memorial, we actually had to go to the intricacies again that whether they are correct or we are correct.

Because sports law is an area where interpretation is needed and many people had not interpreted the way we did. So, it was again interpreting it and thinking that how can we just convince the judge that we have interpreted it better than our opponents.

What’s your take on the whole IPL scenario about spots fixing going on?

Well lately the Lodha committee report has come out that has really thrown light on most of the issues that have been discussed in the context of cricket particularly in India so with regard to that, especially during our research the committee report that we read the cases that we read.

Sports law is still developing; I think the scams that are taking place in IPL have somehow been brought the large umbrella of criminal law under IPC in India. However more specific laws the judges were referring to the sports development bill, such laws would really help develop this area of sports law in India.

Moreover now we have seen when we went through the cases of Supreme Court we see that how strong sentiments are attached to this game of cricket and IPL is completely corrupted at this point because of the allegations. So many allegations cannot come out like there can be no smoke without the fire. So, we believe that there is something wrong.

How did you like the moot proposition drafted by our team? Bob Woolmer case was also included in it and various other instances which are happening in  world cricket?

The Amity Law School Centre – II Student Bar Forum team have actually covered almost everything related to cricket. Whenever you think of cricket the incident that comes to your mind was in the problem and it was complicated but it was really nice to crack.

In fact everything that possibly could have been included was included in the moot proposition which made it all the more difficult yet all the more satisfactory when we did crack it right.

We learned a lot from it because there were many incidents which we might have heard but we didn’t remember so it was really nice to recollect the things that we actually hear.

And moreover it used to be a bingo moment like we saw Hank and Liam and we found the judgment on which Hank and Liam was based like Shallab Srivastava’s case. We were like bingo! We found hank. Bingo we found Peter Woodford.

So how was working with the team like? Did you have conflicts? How did you resolve them?

I think we are quite the envied team in college which is known for having a very compatible team and our strategy was just to help each other out most of the time and to push one another when we one member is facing certain difficulty or one member needs a bit of push so that they keep working in continuity.

We did that for each other. It really helped as a team.

How the faculty of your college helped you about the moot proposition?

The faculty of our college really helped us, when we had certain issues.

For example, like constitutional law we have read it in quite a depth, but still there was wide interpretation needed which was given us by our Faculty and our Vice Chancellor who specializes in Constitutional Law.

Which round was the toughest for you?

The Finals were the toughest. The 1st 15 minutes of the finals.

We were up against Gujarat National Law University whom coincidentally we were sharing our accommodation with. We knew that they were practicing as hard as we were.

When we came to know that both of our team were in the semi finals and the night before we were wishing each other good luck and we thought we might face each other in the finals.

After the finals we congratulated each other as it was a celebratory moment for both of us. It was a close win for us as the GNLU team was equally good.

What message you would give other law students who want to prepare for Moots?

It does take a lot of hard work, pain, sweat and tears. You need to stay up late at times but you need that kind of passion and dedication around you.

Firstly the most important thing which I observed was that many participants cited case laws which they didn’t knew and that was the difference. We cited around 20-23 cases which we knew in and out.

Lastly to prepare for a moot it is advisable to take suggestions and opinions from teachers and seniors who not only help in maintaining a cordial relation but also imbibes knowledge and confidence.

Lastly, how was the organization of the Moot by the Amity Law School Centre –II Students Bar Forum?

Starting from the Moot Proposition, it was the most interesting & unusual moot problem brilliantly drafted. Gave us so much to explore and research.

Secondly, the accommodation at first we thought wasn’t great as we had to stay with other participants but it was one of the most great ideas as we had so much fun and made so many new friends the best being the finalist team of GNLU. ALS- II Student Bar Forum had given us a team coordinator Mr. Sagar Bajaj who helped us throughout and we did consider him a lucky Mascot for us.

We want to congratulate the ALS – II Student Bar forum for the successful organization of this Moot Court Competition. They have certainly set a high standard for the following Moots to come.