Apart from its reputation of being one of the best moot court competitions in the country, we had heard from several past participants that it would have fair-minded judges and a challenging problem in criminal law.

In the end, it indeed did live up to its expectations.

Our team thoroughly focused on having a holistic approach to our research; discussing every angle, even if it seemed far-fetched.

This was by far one of the most important facets of our preparation.

Even if it took a little longer, it not only created a better memo, it impressed the judges during the rounds as well.

We worked quite well as a team. As with any moot competition, the issues were allocated to each of the members for the purpose of building the memorial.

The primary roadblock that we faced was with respect to the research that was required.

Considering the jurisdiction in question was of common law, our aim was to find the most prevalent position in common law jurisprudence; which was difficult as many countries had opposing views in some of the issues we dealt with.

After the memorial round, the competition consisted of 55 teams.

Of all the rounds, we felt the NLS team in our Octa-finals was the most challenging, primarily because many of their arguments were very much similar to our own and countering them was a little onerous. 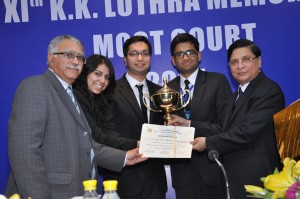 5. How was the final round and who were you up against?

The opposing team, CLC Delhi, was well prepared and sufficiently equipped to tackle our issues.

The Judges were also quite assertive in their questioning.

All in all, it was quite a challenging round.

For both sections, it would be most opportune to note the scope and use of moot court competitions.

In noting the same, it is important to understand that moot courts do not have a major bearing on any law student’s future.

However, it is undeniable that they do have certain tangible benefits. The most important of which would be confidence, especially if one is intending on litigating.

The process of speaking in front of others with an expectation of scrutiny creates a good atmosphere which one can take to courts.

7. Final comments on the level of competition and the organisation of the competition.

The competition was really well organised.

Mr. Sidharth Luthra along with his family and associates personally took care of the arrangements and made sure everyone was comfortable.

Furthermore, the competition itself was very fair.

The judges were well acquainted with the facts and intricate details of the problem and knew exactly where to prod.

It wasn’t an easy task as all the teams were well prepared.

8. Finally, a quick comment on mooting at NUJS, Kolkata.

Mooting is an integral part our University; as has been evidenced from our many laurels.

Many students from the first year itself take a very active role in participating and organizing moot court competitions.

Senior students and alumni also take it upon themselves to help and advise young teams in their preparation.

All in all, mooting is a very lively endeavor in our University.