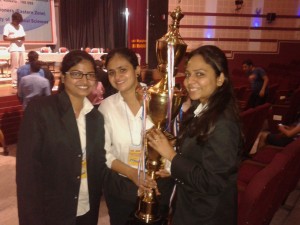 The moot was based on taxation laws. Their final rounds were against HNLU Raipur. Read on for a detailed interview which will help you gear up for similar moots.

Team: Hey! Thank You so much. The first thing about this moot that was really coveting was the subject itself i.e. Direct Taxation.

Though none of us were much familiar with the cores of this area, yet the moot proposition of 28 pages impressed us a lot.

Moreover, this moot being organized by AIFTP was an additional charm.

Team: First of all, we were intimated about this competition during the vacations and for the first 15 days each of us was busy interning. Moreover, further preparation was also not a cakewalk for us.

During the entire period of our preparation (till memorial submission), all three of us were not together but still we are happy that we managed to do it properly.

Also, we had access to good books through our library like Kangaand Palkiwala, Singhania etc and also various online databases.

One of the most demanding factors which help the team throughout the preparation is team compatibility. We are glad that this was one of our strength. We managed to balance the situation by helping each other in all odds.  We appreciate Researcher’s patience in the entire process.

The major roadblock before us was that all of us were not together during the entire period of preparation. Therefore, we were not able to discuss on regular basis which is of utmost importance.

The total teams that appeared for the competition were 15 in number. It was a tough rush for our team to be held us against NLSIU, GLC, NUSRL and HNLU starting from prelims round up to finals.

We believe that all the teams were very good but HNLU, Raipur was the toughest one in the final rounds against us. The presentation and research was remarkable. Even GLC, Mumbai was a tough deal.

5. How was the final round up against HNLU Raipur?

Both the speakers were appreciably good in their delivery of arguments and the amount of research but we were thoroughly prepared with arguments to counter them on every point. This definitely gave us an edge. At any time, the team’s confidence did not shoot down and it helped us a great deal in winning against them.

The final round was judged by a 5-constitutional bench comprising of Honorable Former CJI Altamas Kabir, Justice A.K. Ganguly, Justice Sudip Ahluwalia, Justice Tapash Mukherjee and former Judge B.L Jain. It was for the first time we witnessed such reputed bench sitting to adjudge finals of a moot court competition. It was a like a Dream come true for each one of us.

Noopur Srivastava: For the mooters, I would suggest that you need not know EVERYTHING in law but you must possess such persuasive skills and self-confidence as to articulate any and every argument in your favour (Even if it is not !:D).

And for the non-mooters, it is never too late to start mooting now because it can be an enriching experience for a life time.

Anshu Bansal: Mooting is not just about working on a particular area of law. The experience which one gets during the whole process of doing a moot is something which you won’t learn anywhere.

As a mooter, you should focus upon yourself rather than under-estimating or over-estimating other teams. Patience, Hard-work and Dedication is the key. For those who choose NOT to moot, I would like to quote the stimulating words of Kaushik Krishnan;

Beyond the research and the speaking what mooting really gives you is the wealth of experience in preparing for and then going out with 2 or 3 people who started as strangers but with whom you inevitably develop the closest bond. Moot to know what it feels like to argue in front of the smartest lawyers, moot so that you can freeze together with your team mates in a foreign country, Moot for all the things that will never happens to you if you don’t , Moot atleast once.

7. Final comments on the level of competition and the organisation of the competition.

Considering the fact that it was organized for the first time, the level of the competition was really tough with best of the teams participating. Also the subject matter which dealt with re-opening of assessments under the Income Tax Act was quite challenging.

The hospitality was awesome with free accommodations and food provided at Udyanchal Lodge in Kolkata and the transportation was always available for the teams.

8. Considering the fact that, particularly NLUO, did really well at National moots in past on year. What’s the secret of this sudden roar?

We would like to intimate you of the fact that on the day of our final rounds, NLUO won the Best Memorial at the Henry Dunant Moot Court Competition.

Apart from this, in the past 2-3 years it has performed exceedingly well in a spate of International and National Moots including Phillip C.Jessup, D.M Harish, International Maritime Law Arbitration (Hongkong), Surana IT, Nani Palkhivala and such other reputed moots (grabbing best memorial in almost every second moot :D).

The secret behind this can be attributed to the level of Intra-University Moot Court Competition (IUMCC) and the Challengers organized for selecting the best team at the University level. The standard of judges at the IUMCC is no less than any national moot.

Our Library has a database which is one of its kind and also the faculty guides every team with full volition. We believe that being a growing University, good research and training is an essential factor.

The Memorials of the NLUO team are available HERE.