Needless to say, she got the winners of the competition i.e. the participating team from RMLNLU, Lucknow comprising Anupal Dasgupta, Garima Nagpal and Anamica Singh to share their experience with the law student community.

The Problem of the Moot can be viewed HERE.

The Defendant Memo of the Winning Team can be downloaded HERE.

The Plaintiff Memo of the Winning Team can be downloaded HERE.

Read on for comic references to our favourite super hero, the IPR struggle and the challenges of a competition.

What made you choose the moot in the first place?

Going for the 7th B. Krishna International IPR Moot was a collective decision.

IPR is quite a nascent field of Law in India, not many experts on the subject exist.

We thought that this could help us come up with some novel arguments because sometimes debating only questions of ‘law’ per se, can be really boring.

Another reason for choosing the moot was because it was at Symbiosis Law School, Pune – which is known for hosting the two best IP related moots and is quite popular among law students. We were quite sure that it would be an amazing competition (it indeed was).

How was the process of preparation? How did you go about the entire stage?

To be honest the prep. started like ‘reeaalllyyyy’ late.

The moot problem was released at a time when our exams were on and after that- the exams having ended, we all went our separate ways i.e. home, (my co-counsel begs to differ, she thinks she did an internship).

The vacation saw a lot of fruitless telephonic yelling and instant messaging— and after a month of ‘nothing’ we returned to college with shit loads of work to be done.

We knew that it was time to get ‘badass serious’—- so we got our asses to work.

The issues were divided and we read the moot problem (which was lengthy as hell – 29 pages) multiple times. 5 days, 12 books, 29 articles and 10 mugs of ‘water’ later- we were still clueless and as disorganized as an addict.

Then came the 7 days of serious business and I felt like my life was shittier than Ajmal Kasab waiting for the gallows. But that did the trick, amazingly the memo was done (though I lost some grey matter in the process).

Jokes apart, a moot memo does require a lot of brainstorming and yelling to come to a conclusion on an issue. We sat down together and discussed the key points, tried to argue questions of law and fact.

Each member being assigned two issues each, there was a balanced division of labour with each one of us chipping (Communists would be proud). After deciding the particular stands on each issue – we were left with 4 days and a voluminous task of drafting the memorial.

An important thing about drafting which is the key to our win is sequential logic in the arguments.

There needs to be a structure which should flow from top to bottom, coherent at the same time. While explaining the same, novel arguments and analogies must be given due importance. Innovative arguments backed by proper research adds stars to the memorial and is generally appreciated by the judges as well.

Forming the perfect team is like having a baby. It requires a lot of persistence and you never know when you get lucky. For us it was the single most difficult task. We’ve been experimenting since like forever.

The latter part of working just comes naturally. It’s like having a good pizza sauce, no matter how you spread it, the pizza turns out to be damn tasty! That being said, we had the perfect sauce, i.e. a good researcher, a good resource person and an amazing BATMAN.

Our strengths lie in a good mix of research, novel arguments and a structured drafting. Each round being a different ball game – with the mix in place we played all of them pretty well.

Finally, the roadblocks, to be honest – yes, they were plenty. Coming to a conclusion on issues, arguing upon the best way to approach an argument and also keeping a check on each others ‘kam-chori’ had to be tackled.

Thanks to BATMAN again!  Hurdles will come and go, but sail through we must!

There were 50 teams participating, including one from Faculty of Law, Chittagong University, Bangladesh. (whom we went up against in one of our rounds).

The toughest competition would be from National Law School of India University, Bangalore. They had a lot of stuff in their memorial, the scores of this round were quite close too. (SEMI – FINALS)

How was the final round up against Amity Law School, Delhi?

The final round was relatively easier (evident from the fact that we won with a whooping 113 point margin). By that time the arguments came to us naturally. The bench that judged us in the finals was a Full Bench.

Adv. Singh came up with some really challenging questions which were quite efficiently handled.

We would like to believe that coming up with novel propositions at the spur of the moment when faced with  such questions is what earns you a lot of brownie points and ultimately wins you the moot. 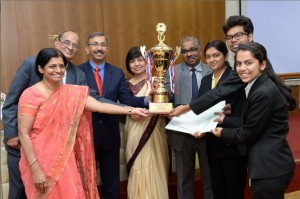 In every moot it is essential that, the basics on which the proposition is based need to be crystal clear.

A good way to start is to go through the bare provisions of the subject, i.e. bare acts, manuals, draft manuals, law commission reports.

In this moot specifically we heavily relied upon the Indian Patents Act, the manual as well as the draft manual of the patents office.

The provisions therein were then construed and interpreted as per our needs while substantiating the same with case laws (both Indian and Foreign) on the subject.

Online Articles and Journals should also be referred though they value as merely persuasive.

Finally it is important to read a good book that elaborately discusses the subject (ours being Feroz Ali’s book on Patent Law).

Also, Patent Law being relatively unexplored in India, an advice would be to go through articles published by various law firms, it helps you form an opinion in the matter.

Not an advise but more of a realization, mooting is not as tough as it looks like, with a bit of persistence and a few sleepless nights you can achieve the heights of glory.

P.S. – The mantra that our team followed was inspired from a movie that BATMAN made us watch in the onward train journey – “The Great Debaters” directed by Denzel Washington (he also acted in the same), and I quote –

“Who is the judge?

The judge is God.

Why is he God?

Because he decides who wins or loses, not my opponent.

Who is your opponent?

Why does he not exist?

Because he is merely a dissenting voice to the truth that I speak.”

P.P.S. – Another essential to a good preparation is giving mocks to, seniors or teachers in your Law School. It gets you battle ready. In our case we had some really amazing seniors to help us out.