Following the weekend of Symbiosis B Krishna IPR Moot Court Competition, 2015 Neeati Narayan coaxed the runners up of the grand event, the team from Amity Law School Delhi comprising Harsha Satyakam, Himangi Kapoor and Surabhi Pande, to give an exclusive interview for Lawctopus along with their memorials to be shared with the student community. We thank the team for the same.

Basic questions first, what made you choose the moot in the first place?

Thank you so much. The three of us were really interested in IPR, so while choosing moots we were sure we wanted to do atleast one intellectual Property Law Moot. B. R Krishna was a prestigious moot at a great college, so we immediately decided on it.

How was the process of preparation? How did you go about the entire stage? (give details for moot memo research, drafting and pleadings)

The process of preparation was a long and tedious one ;). We first spent a lot of time dissecting the moot problem, and everytime we read it, a new facet would emerge. Each one of us had our own take on it.

We sat down together, spending almost a good week at each other’s houses, drafting, reading, editing, re reading it :), keeping one whole day apart for formatting it.

After the drafting was done, we set about working on the compendium which was a herculean task- but once that was done, preparing for the pleadings didn’t take much time.

We made a list of important questions that could crop up in the course of the arguments and their answers. We also timed ourselves to take up about seventy five percent of our speaking time, so that we had time to answer the questions put forth by the judges.

The three of us have been really close since the first year so we have an inherent level of understanding and trust. Working with friends automatically becomes fun so you don’t mind the stress.

Our forte would be the fact that the three of us perfectly complement each other- while Surabhi is assertive  and highly persuasive as a speaker, I, (Harsha) am much towards the calm and polite side.

So together, our speaking is just the perfect balance of assertion and politeness. Himangi, our researcher is  not just a complete whiz with MSWord but also very logical and rational in her thinking,, a natural problem solver.

The roadblock would probably be the fact that none of us had any prior experience or knowledge on this subject, so we  had to start from scratch.

Counting the two prelims, octas, quarters, semi final and final rounds, we were up against six teams.

Out of these, the team we were up against in the Octa final,( GNLU) and Semi Final Round( ILS Pune) were probably our toughest competition. The research of the latter was impeccable.

How was the final round up against RMLNLU? What could have possibly changed the outcome?

Arguing infront of Mrs. Pratibha Singh, in a question on IPR ; it was something we’ll remember all our lives.

Once the round started, we realised that the team against us, RMLNLU had a very high level of research, admittedly much above ours.

The fact that they had specific answers to whatever the judges asked left us in no doubt about that.

It was definitely commendable. It made us realise that we should have spent more time on our research. 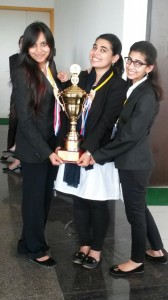 Researching for a moot is much like researching for any other project- you first read thoroughly on the subject to get a general idea, after which you narrow the topics you want to read up in detail.

One of the most important things is to first read the problem carefully, at least fifteen to twenty times.

Another thing one must keep in mind is that authorities only have weight if they actually apply to the facts in question.

To both, we’d like to say enjoy mooting. The non mooters specifically, we’d request that they at least once try mooting, even if only to gain an experience.

The knowledge, confidence and patience that one acquires while working for a moot is something that can never be rivalled by what is learnt in a classroom.

It is a highly enriching feeling which every future lawyer must experience atleast once. Thank you.

The Defendant memo can be accessed HERE.

The Plaintiff memo can be accessed HERE.

a.State Trainings: As of today, approx. 71.16 lakh (cumulative) trainings have been completed across various modules, of which 55.6 lakhs were conducted till 22nd May.

Follow the basic hand hygiene to prevent the spread of COVID-19. Wash your hands frequently with soap and water or use alcohol-based hand sanitizer.
#BadalkarApnaVyavaharKareinCoronaPeVaar #HealthForAll #CoronaOutbreak #SwasthaBharat

A new outbreak of #Ebola is occurring in Équateur province, #DRC. 6 cases detected so far, including 4 deaths. WHO surge team already on the ground supporting the response: https://bit.ly/2MwnjjT

As a record number of countries are now monitoring & reporting on #antibioticresistance, new data reveals that a worrying number of bacterial infections are increasingly resistant to the medicines 💊 at hand to treat them.