End semester ended among relief, tears and goodbyes. For the Freshers it was the homecoming time. Struggling with our immovable enormous suitcases we got on our trains and aero-planes and scuttled home like tiny scarlet beach-crabs.

It was May and Calcutta greeted us with her sweaty and stinky embrace. My tiny town welcomed me like a star, me being one of the few birds that had flown away. I was happy to be back, if not exactly jubelious , the unbound freedom of Lucknow being beautifully addictive.

No change was noteworthy; the Ganges remained brown, the station remained governmental blue, the people with their beloved depression and complains of national conspiracy, the bazaar odoriferous with fresh fish and rotten vegetables, and the cows mooed morosely in the illegal dairy farm by my ancient green mansion. 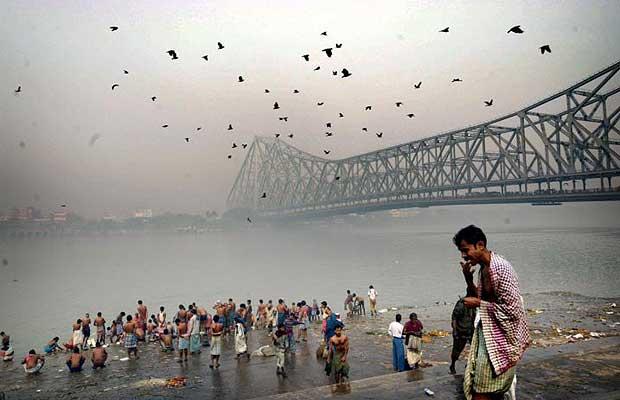 I was to intern for the very first time. My applications, having been sent to several NGO’s had met with either emetic polite rejection or no reply at all. Mean world it is.

In the meantime my father donned the superman cape and gifted me with an internship under an advocate practicing at the Calcutta High Court.

The only time I happened to notice this magical place is when I hurried past it while going to school and then back home. Adorned by the magnificent Eden Gardens, the haunted Hasting building, the regal SBI head quarters, and the little posh Legislative Assembly, High Court rose its proud red yellow colossal colonial head elegantly and arrogantly, somewhat at the banks of the calmest of all rivers, the Hooghly.

I was nervous and my feet had frozen blue, out of simple fright. The lawyer had the repute of having a dangerous bark apart from the usual bite. My beating heartbeat resembled a military death march.

Here one never shows the audacity to walk. One just swam along in this human sea and that is precisely what I forgot to do. As a result one of my forever-lasting heels snapped away, a gentle looking woman abused me pathetically with a scientifically wrong abusive word, and my big-foot got stuck between the jetty and the almost wrecked ferry (which will shock you with its capacity of passengers and its ability to still float).

Finally I reached 10, Old School Street. True to its name, it was curiously old and superbly dirty.

The lonesome clerk was a sweet spinster. She was wrinkled, little, magnificently chatty and could become voluntarily invisible.

Sometimes she used to stop breathing when she narrated me the tales of her travels, which usually ended with her confessing the fact that she had cried after every incident that occurred. She fell on the station, she cried. She lost her quarterly saved changes, she cried. She answered my drafting queries, she cried. My lawyer won a case, she wept.

It was my first day at my internship. Not second, not even third! First! My lawyer was not so cantankerous after all. She chatted with me a bit and handed me a bundle of green folder.

“Read the case, attend the hearing and report to me after lunch.”

I galloped away elegantly with my embarrassing limp and giant stature, which seemed even grander beside the little clerk. She deposited me at Court number eight. It was mammoth and empty.

I felt quite at home. Everything was massive. The Judge’s chair, the audience’s wooden benches, the never-used witness box, those discriminating few black chairs (Do not sit here! The clerk had warned in an ultrasonic hush), and piles of memorials.

As time progressed, busy and pretentiously busy lawyers started flying in. Their fancy black robes swelled with importance and gravity. A weird thing followed. As soon as they entered the Court, they looked at me.

Some smirked, some were horrified, the older ones sighed, the ancient ones that had sadly approached the death’s door yet had stubbornly refused to die, ignored and one particular female associate (freshly graduated as inferred from her sense of humour) laughed.

Had they never seen fat woman before? I snarled in my mind.

At that moment the bailiff entered, everyone stood up, the dying one painfully shifted their hips and the Judge entered. And quiet expectedly his wise and ancient eyes fell on me. He smirked.

All the air having escaped my proud puffed pigeon chest, I strained my ears to listen to the roll call, listened to the hearing (which involved a lawyer bowing, murmuring inaudibly and hurrying past).

I took pity on my mortified soul and left soon after.

It wasn’t at all what I had expected it to be. It was much grimmer, not at all exciting and did not bear any resemblance to the Court I was acquainted to on television. But the river always finds its path, and I did find a court with all the excitement.

This court held cases mostly relating to company matters. It amused my lawyer how I had grown fond of this Court. And the judge that presided it. Well she guessed, because I could hardly stop talking about him.

Justice B had an air of Jupiternine seriousness and wisdom which was interrupted quiet frequently by his wit and personality and the sarcastic lop-sided smile and the ease with which he subtly made fun of senior advocates, thus turning his court into a pot boiling drama.

This court room was a sophisticated and a far cry from the noisy Criminal courts (in the new building) where all could see was mostly vulpine interns perching and sad advocates complaining and judges declaring, “My dear appellant, I would advise you to change your lawyer“, or turning towards a surprised onlooker with a meandering finger and genuine inquiry, “How much did India score?”.

There was a mad rush to occupy a seat in this court. It was always immensely crowded. Advocates with diamond studs in their ear, feverishly polished shoes, interns with fierce curly hair, Potter glasses, drooping eyes and long arachnoid legs, invisible clerks, concerned clients and bustling court clerks bedecked the room.

The judge had noticed me on my first day, no points for guessing why. My almost regular attendance in his court had ensured a sort of sun and the sunflower bonding to grow between us. He never failed to gaze through me and I was transfixed by him. His bourgeois arrogance seemed perfectly suited and added well to his aura.

I had attracted his attention once. Sadly I am not proud of it. A lawyer had announced, “My Lord! They devalued the ARSE“!, to which the judge sardonically replied, “You mean ash, don’t you?“.

There was an embarrassed silence in the room broken only by the humming of the antique air-conditioner. Few looked at each other and some just refused eye contact and searched for an interesting dust speck on their mirror-shine shoes. I giggled.

The antediluvian desk on which I was sitting shook with my infectious mirth. It was too late before I realized my folly. Damage was done. All pairs of reptilian archaic calm eyes were resting on me. I wished for thousand deaths. Then I noticed his eyes.

He smiled at me. My humiliation then dissolved in a clean pool of aromatic self glory. I smiled back. It was like an invisible hi-five. Life was worth living.

The next few days passed like a blur. Few eventful days came finally when a batch-mate became my colleague. Having had grown tired of the judicial rituals, we took a habitual tour of this universe iridescent with half smoked cigarette butts, coughing our way through the nicotine smoggy clouds.

We found a visit-worthy restroom, the chief justice’s court, few seniors from our college giving us ‘ah-our-juniors’ angular stares and many, many lustrous stares. Clearly the pretty friend of mine had chosen a wrong place to be.

Calcutta High Court was infested with humans perpetually on their heat. Nobody was ashamed of their dishonourable stares. Surprisingly we failed to find any one laudable with our dishonorable stares. “No cute guys”, sighed G. I patted her hand. I understood the pain.

Finally the curtain was called on my internship.

It was time to return to our arctic city (Temperature ran to minus one on a particular day I remember).

Time to brag about ‘exciting’ internships, time to welcome the frowning roommates, time to blush in front of indifferent , insensitive and heartless and selfish humans of interest, time to shiver in half-filled classes, time to whine about the fattening and inedible mess food, time to apply for winter internship and time to enjoy freedom again.

North, West, East or South, we all are together in this fight against #COVID19. Let's support each other & care for each other.

Press briefing on the development of drugs, vaccines and technologies for testing during #COVID19Pandemic

Press briefing on the development of drugs, vaccines and technologies for testing during #COVID19Pandemic

An important part of @WHO's future success is broadening its donor base and increasing both the quantity and quality of funds at its disposal. I was honoured to launch the WHO Foundation today, together with Professor Thomas Zeltner.
https://www.whofoundationproject.org/

Good call with my friend Sergey Lavrov, Minister @mfa_russia. We discussed a wide range of issues, including the first ever virtual #WHA73, the global #COVID19 response and the humanitarian situation in Syria. I thanked him for #Russia's support to @WHO. https://twitter.com/mfa_russia/status/1265648004138184705?s=20

☎️ On May 27, Sergey #Lavrov had a telephone conversation with Director-General of the World Health Organisation @WHO @DrTedros. Mr Lavrov reaffirmed @Russia’s support for the #WHO’s work aimed at coordinating efforts to overcome the #coronavirus pandemic. https://is.gd/1ZGuwa

Press conference on #COVID-19 in the WHO European Region https://www.pscp.tv/w/cZ4jcjFwempNZ2VBcUxOUWR8MW5BS0VkcGFnWmF4TBkior9BaSn_CYzJuZdGraxIm5bjP61QxIPKvq6MlcDZ