Since my dad is posted in Meerut, Uttar Pradesh, I decided to do a community service internship with the Missionaries of Charity branch in Meerut.

I went to meet the Sister- in-Charge directly and fixed up an internship for 10 days completing the community service requirement of 30 hours.

The Missionaries of Charity branch in Meerut is divided into two parts i.e. Jyoti Niwas and Prem Niwas. The former houses children upto the age of 10 years. The latter houses young girls and ladies and caters for the education, shelter and upbringing of both the places.

My first day was extremely productive as I went to Jyoti Niwas and interacted with the children there. It was important for me to build a rapport with them in order to communicate. 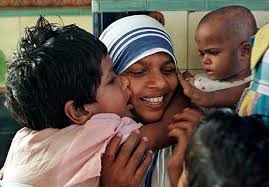 I interacted with young children from Shishu Bhavan. They were between the ages of 2-10 years.

I played an active role in teaching the young minds(between 3-13 years) and researching on their respective backgrounds. I Also interacted with the girls between the age group of 15-25 and was exposed to their family situations, level of education and their dreams as well as aspirations in life.

Fortunately, since Missionaries of Charity gives children up for adoption well, I dealt with the lacunae in the laws of adoption in India and the role of the Government in the same.

The incapability maybe emotional, physical or mental. The sisters look after these children. They send them to school, organize playing activities for them and nurture them.

Many a times the parents do not come back and the sisters raise these children till the time they make a living on their own. I was involved in the daily life of these children.

I used to teach the ones who were too young to go to school, play with them, feed them, teach them the little things which matter and help the sisters in their day to day activities.

The work environment was extremely positive as you are surrounded by positive people and involved in their life. The sisters were such wonderful people that it was my absolute pleasure to serve with them.

Moreover, I was surrounded by children and their presence alone made the environment happy and full of energy.

The lesson learnt is to go there with a smile on your face, talk to them and most importantly, listen to these children. They love nothing more than your company and a big tight hug.

It was heartbreaking to see them cry when I was leaving as you develop an attachment. I am not saying this just for the heck of it, I actually mean it.

They grow fond of you and it is hard to tell them that you wont see them for a while So I promised them I would visit them every time I am in Meerut and till now, I have been able to keep this small promise and do my bit.