Duration of the internship

The office was bigger than some of the law offices I have worked in. It’s a two floor house converted into an office. The house is spacious and airy, high ceilings, a lot of windows, bright and sunny, in short a perfect environment to work in and give back to the community

Since I am from the city and the NGO is located very close to my residence, I just dropped by the office and explained my background and my desire to contribute. My family, my mother, aunt and cousins have been involved with the NGO in various respects over the years.

My mother used to be the creative head for their charity product line of paper products. My aunt was a manager for their hobby center for underprivileged kids and other positions as well. I myself contributed in a volunteer capacity growing up- be it selling their fete tickets for charity, helping with their promotional campaigns and magazine etc.

That being said, I being a law student now, I told them categorically that I wanted to contribute in a way where I could utilize my knowledge regarding law. Their website contains all important details regarding the work they do and the ways people can contribute to their efforts.

It’s a brilliant website and definitely insightful- One wishing to intern can peruse the same to make an informed decision http://latikaroy.org/

Exactly 4 weeks. Saturdays and Sundays were off. Reporting time was 9 as that was the time when the other worker- the paid employees also began their day at work.

I stayed at my personal residence since the city is my hometown. Dehradun is a safe city and PG options are very easily available for both men and women. Its all well known as a town full of charitable organizations and NGO’s so there are always options to chose from as one’s best FIT interest-wise

No formalities as such. I was introduced personally by my supervisor to the entire staff of workers and briefly informed of my duties as well as an idea of what the organization stands for, the work they have been doing in the past et all, a lot of which I was already aware of through my past relationship with the same.

A brief intro regarding the NGO and what it does The NGO primarily works in the field of disability and specifically for the betterment of persons with mental disabilities for example autism, cerebral palsy, asperger’s syndrome, Down syndrome etc.

Their operations are locally centered but they have been branching out consistently over the years. The NGO was started by a woman who had chosen to adopt a girl who was born to a poor malnourished pregnant woman and turned out to be suffering from a variety of serious mental disabilties.

The woman Jo Chopra- an American by birth (married to an Indian man who is also a party of the organization’s broader activities in the field of youth betterment, poverty alleviation and environmental change ) found it difficult to cope with the larger repercussions that of raising a child with developmental disabilities .

As she started taking care of her child’s needs, she realized the immense apathy that people with even minor disabilities have to face while going about their life. This coupled with the ridicule that they faced daily specially the term retard attached to them, troubled Jo whose own child would grow to be a victim of the same.

From this grief stemmed the idea of inclusion basically meaning an organization devoted to bringing the disabled population of people to the common fold, to be accepted and better their life. 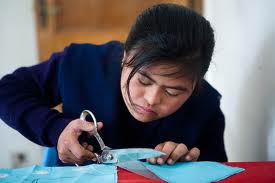 As aforementioned, I desired to contribute to the NGO in a legal capacity this time around. My supervisor Priyam Bhargava assigned me to work closely with the man who heads the legal side of their operations.

On the first day, he informed me of my main assignment during the duration of my internship- that of research and putting together their disability laws journal along with assistance from him ofcourse. This occupied the majority of my time at the NGO.

During my internship, along with Rizwan the head, I was also required to look into loopholes in the system. We would make trips to various public offices and shopfronts and he would indicate how they are violating certain building norms which benefit disabled people.

For eg there was a government order which clearly stated that all public offices would have to ensure that at the entry along with stairs they would have to build ramps for the passing of wheelchairs of disabled people.

There were many colleges in the city along with a public office flouting this norm and we filed an RTI to remedy the same. All in all a very fruitful exercise of my legal knowledge and its obvious expansion.

During my last week, I assisted in a door to door fundraising drive for the holding of their charity fete

All the people are easy going and each has an inspirational and eye opening story to tell behind their decision to become a part of the organization. They are hardworking, tough and caring, sensitive people. I realized during the course of this internship how judgmental I personally can come across as and learnt to become a lot more empathetic and pro-active

Best things? (Nothing is all bad)

The NGO has a lot of heart. And that kind of qualification for a place that works in the field of charity is pretty much enough said.

Bad things? (Nothing is all good)

I have nothing bad to say about the office environment but it does take a strong heart to be around the negative attitudes of people who I had to interact with for asking donations.

One woman told me bluntly that we would be better off contributing to more important causes such as helping poor people and children rather than wasting time on these -in her words- no use to the world- souls. Also, the general misconceptions people have regarding mental ailments and people who have them (I being one of them) frustrated me on more than a few occasions

Since it wasn’t a formal law firm like set up, the entire time that I spent at the place was chilled out and fun. There was one other intern with me at the time and a lot of young college going kids as volunteers- basically a lot of young blood dedicated to their job and also intelligent, sensitive people to have meaningful conversations with.

We made a lot of field trips as a group to the various scenic spots in and around Dehradun like Mussorie hill station- an hour away from Dehradun city. We also bonded a lot during the fundraising drive as aforementioned and celebrated the money that we raised at a café run by underprivileged women for their own progress.

Money should never be the bigger picture- it should be a part of the picture, not the picture itself.

Most NGO’s suffer from lack of dedicated manpower. I would hope by reading this and in general more young people contribute to social causes and then stick to their efforts over their years. There are a lot of people who donate to this NGO – TATA being one of their biggest benefactors but money is still an issue.

It is hugely important for the success of any non- profit organization to have dedicated and consistent donators. Lack of education along with lack of empathy becomes a lethal cocktail ensuring that the disabled populations are always relegated to the sidelines or hidden from the public eye whereas they can contribute in a big way to the society if given a chance and training.

One doesn’t need a lot of money to be happy and happiness and financial wealth are not necessarily correlated. A lot of people I interacted with during my internship either gave up lucrative careers or had the prospect of a guaranteed lucrative job which they gave for contributing to this job.

And they all seemed completely content and are totally changing the landscape of the country with their tireless efforts.