I applied for this by Internship by posting a request letter, my Curriculum Vitae pinned with a bonafide certificate from college, to the Registry of the High Court of Kerala. The request was letter was concise in format stating details such as duration of the internship and the year I was studying in.

I did not receive any sort of confirmation, which eventually put me under a lot of pressure as I did not have a backup plan of any sort. A few of my friends who had applied to the High Court earlier, received their confirmation letters far earlier.

Nevertheless, I went to the High Court on the date I was expecting to commence my internship and approached the Registrar, who disclosed that there might have been a slight mix-up with the post, and apologized for the same. As my name had already been entered in the official register, i started my internship on the same day itself.

1. It is quite a task to gain entry access to the High Court if you do not have an Confirmation Letter from the Registrar.

2. It is also possible to gain an internship under a Judge of the High Court Of Kerala, through personal contact, but the official procedures would still have to be complied with.

Infrastructure: The chamber was capacious and neatly kept, it consisted of huge racks, a rest room, a dressing room and still plenty of room where you could possibly park a lorry without much trouble and as a cherry on top, this chamber was on the 7th floor of the building, which contributed to improving the strength of my lungs over time. The view from the Chamber was absolutely breathtaking, since our office faced the Arabian Sea.

First Day Formalities: For any other intern, you just have to walk with your confirmation letter from the Registrar to the Judge’s Chamber, whom you’ll be interning under.

First Impression: I was slightly overawed by his Lordships presence because only a few days back had he passed a judgement for a highly controversial case. He was quick enough to break the ice. Asked me a few questions, he briefed me on the type of cases he deals with and the area of law his bench typically covers, and to my surprise he asked me what should he do with me.

I was shell shocked, but only then he revealed that he has never had to deal with an intern before. I was clear with my objectives which made it a whole lot easier for him to delegate work to me.

On the first day, I was ask to attend the sessions at the Court Room. I was expecting him to ask me questions regarding the cases he heard, so i took a notepad along with me. Two days went on in a similar fashion until he gave me a 300 Page Case File consisting of Post Mortem Reports, Judgements from Lower Courts, etc. and asked me imagine myself to draft a sample judgement for the same.

Reading a 300 page document was not easy nor could I draft judgment. The next day I apologized for the same and conveyed how hard it was to complete the task. It seemed as if he was expecting it, and he asked me to draft it in office when he is at his sessions. I completed it before noon, he read it a very short span of time and told me it was terrible, and judgments should not be written in a layman’s language.

I did not feel bad as I was not expecting anything lesser than that. So for the next week, I was given tasks of correcting those judgments he had drafted, as in cross referencing the most intricate details which could be easily overlooked and researching material for the cases he would be presiding over the week.

I guess, he was content with my work because the very next week, after he returned from the Court Room at 4:30, he pointed at the Computer Desk and asked me to draft the judgments while he sat rechecking those orders that i had corrected. Of course, he sat and corrected the judgments I drafted that week, but it was more like division of labour as we were taking turns in drafting and correcting.

It is true that all Judges have Law Clerks and Personal Assistants who draft the judgments for them, and all his Lordship had to do was sign them after approval. But, the judge I interned under was an epitome of a perfectionist and was never truly satisfied with the work of his assistants. He always went by the principle, “if you want to get something done, you got to do it yourself”. This meant that all his assistants left at 5 PM and his lordship and his intern left at 7 PM and later.

Over the weeks, I earned his confidence and trust with the drafting and research duties. I was desperate for some sort of explicit recognition for my work, but his Lordship was often critical which made me work harder just to impress him.

Everyone was extremely friendly and warm. I really grew close to his Lordship over time. He had a son who was a year younger than me, so I guess it was quite easy for him to connect with me. Literally, after two weeks of interning under him I realized working till 8 PM and shorter lunch breaks were not that bad at all, because he had truly made me fall in love with the work space.

I enjoyed every minute I spent there, we often found ourselves about the hottest of topics (e.g. Kerala Legislative Assembly Election 2016) and our interests like new restaurants, photography and bikes.

The Assistants and clerk were really nice people, who would love to slip in some extra files into my desk which were incomplete because i was seemingly helping his lordship draft majority if the judgments.

Due, to the nature of the internship and protocol it isn’t possible to disclose the subject matter of the cases, but I learnt a lot about the work nature of Judges, and the exquisite skill of drafting a judgement. His Lordship also shared his success story with me and gave me some really good pointers on life and career.

He would often ask me, if I ever wanted to be a Judge and I would say yes because i felt any other answer would disappoint his Lordship. But, on the final week I opened up and told him that the work load scares me and he laughed telling me that this was the answer he was waiting for.

I also managed to get my hands on the files of some high profile cases, which were really informative and made me wonder about the extent of lies the media fills our heads with.

Overall, it was wonderful informative because i nearly ran out of pages in my notepad which were scribbled with things i learnt during each day.

His Lordship, expected me to work during the Lunch Break, when he and everyone else in the High Court of Kerala, were having lunch. This also meant I could not meet up with my friends who were also interning at other chambers.

Working till 7 and 8 at night left me drained to spend the evening out at the city.

But over time I grew into it, because his Lordship was a lovely human being and really good person to spend time with, even though we were not spending time in a leisurely manner.

All the work load and extra hours really paid off, because his Lordship and I overlooked the fact that i needed an Internship Certificate from him. A week later, I received a post from his Chamber with my Certificate which was absolutely beautiful and nice compared to all the pre-formatted internship certificates my friends received.

None. His Lordship offered to take me out for Lunch or Dinner couple of times, which I declined. But then, on the last day of my internship which was a Saturday he bought me Lunch which we had together in his Leisure room enjoying the view from the his office on the 7th Floor, which was emotionally fulfilling moment for me personally.

Procedure for Drafting Judgements. Research Methodology and most importantly lessons on how difficult it is to accomplish yourself in the field of law. The constant effort and dedication that has to be put before you can make a name for yourself.

I stayed with my uncle who stayed a few kilometres away from the High Court. Finding accommodation to suit your needs will not be hard to find as High Court is located at a prime location, and there is plenty of options you could check into like hostels, lodges and PG’s.

Office timings were from 9 AM to whenever the work was over. The latest I left the office was at 8:17 PM on the 2nd of June.

The timings were not strict as such, meaning I could leave whenever i want to, but the Judge I interned under was a workaholic and had an unreal, inhumane dedication to his work so it wouldn’t have been fair if I left earlier than he did. Moreover, the extra hours I put in helped me immensely in various ways. 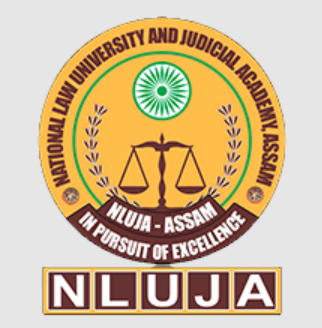 Call for Submissions: Lex Terra [Issue 40], a Webzine by NLUJAA: Submit by Sept 10