“Kapil Sibal’s declaration that Google and Facebook must submit their content for screening against ‘objectionable’ content has rightly aroused the indignation of Netiziens around the country” went this news-piece.

–
Had these Netizens been present in RGNUL, they’d surely have done more than express their indignation. Now, what has RGNUL done here? It’s much more oppressive than Mr. Sibal did and mirrors what China does with discontent.
–
Here is the story (verified after listening to four student’ accounts):
–
Around a year ago (September 2011), the mess food at RGNUL was bad, it was unhygienic and sometimes even surprised you with a ‘foreign element’. (We don’t know how the mess food is now).
–
Around that time a student captured a video of how this unhygienic food was being prepared in RGNUL’s kitchen. The video was uploaded on Facebook.
–
The administration came to know about this and instead of bettering the food, passed a gag order on the video.
–
The student was instructed to take-off the video from Facebook. The authorities have also, since then, banned Facebook in RGNUL.
—
—
In response to the first few comments asserting that Facebook is not banned in RGNUL: One of the demands in today’s petition is: Social Networking sites such as Facebook, Twitter etc should be unblocked.
N— 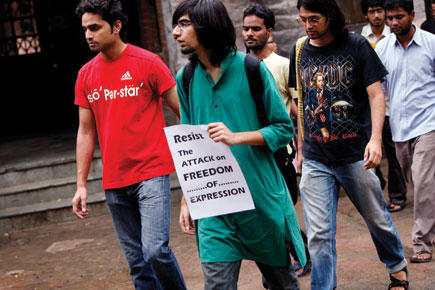 Snippet: It speaks of why the internet as a medium of student expression is being seen as such a serious threat to authority. On the net, all voices are equal, and it is precisely this freedom from power hierarchies it affords that needs to be defended—and fiercely too.

A team has been constituted in #MoHFW to address technical queries/doubts on #COVID19.
Queries can be sent to [email protected]

For details of updates on management of #COVID19, please visit:

WHO and @Viber fight #COVID19 misinformation with interactive chatbot in multiple languages
👉https://bit.ly/2R3QgGf

Called @DrTedros to discuss outlooks and how to develop digital health services. #Estonia excels in secure personalized digital data exchange with the state, which solves some of the problems we're facing - now and in the future. Ready to share our knowhow with ​@WHO.

[email protected] published a new Guide to building country #EssentialMedicines lists. It highlights the need to choose medicines of proven safety and efficacy for the benefit of all patients: https://bit.ly/3dLyaCC #HealthForAll