Home » Blogs, News, Advice » Law School Review » The Lifelessness of ILS Pune: 3 Suicides and not a Minute of Silence and 7 Other ILS’ Realities [READER’S BLOG]

The Lifelessness of ILS Pune: 3 Suicides and not a Minute of Silence and 7 Other ILS’ Realities [READER’S BLOG]

Note: This is a reader’s blog.

Much has been written and spoken about ILS Law College, Pune, and its degrading standards.

As a recent graduate, I have my own share of reflections on it, which, for the most part I had suppressed and not addressed for the longest time. Perhaps it was because I was trying to save my face from myself, having been a student here.

But I have reached a point where I feel extremely guilt ridden if I don’t put into words about what exactly goes on in this institution. So here is my version.

I did not get into one of the top NLUs when I wrote CLAT and was thoroughly disappointed. But unnaturally high CBSE marks enabled me to secure a seat at ILS Pune and I was ecstatic.

Allow me to enumerate why, for easier reading:

Law subjects are not a proper part of the curriculum till the third year.

Vast subjects like Constitutional Law, CPC, CrPC are crammed into a one semester each.

There is no form of internal assessment whatsoever, except for a dubious system of conducting ‘tutorials’ at the end of each semester where students are basically expected to fill out a couple of sides on one or two questions of each subject. These are not evaluated or anything, it is suspected that they are used in the winters for bonfire.

There happens one examination at the end of each semester, 100 marks papers, of 6-7 subjective questions of 16-20 marks each.

It is popularly believed that they are marked according to the number of pages you fill in. But the safer bet is to just pray really hard that you scrape a 60 percent somehow.

If you are not satisfied with the dismal marks randomly dished out to you, you still have an alternative called ‘revaluation’.

This basically means that you pay an exorbitant amount of money to the university to ‘re-correct’ your paper, and there’s a chance your marks might increase. Though mostly they don’t.

It’s true that we have had some truly remarkable professors, whose classes have been a joy to attend.

However, there are equally, if not more, professors who can barely string a sentence in English correctly, let alone teach law.

There are also some who take out personal vengeance on students when they ask actual questions of law that might test their grasp over the subjects they teach.

Editor’s note: The above is true for most of the colleges in India.

The college canteen might be the most unhygienic place I have seen in Pune. The kitchen is rat infested, food is disgusting and insanely overpriced, and the staff is rude and impolite.

This is coming from someone who has encountered dead wasps in my fried rice, onion peels and stones in my poha and almost always had an argument with the counter guy over giving me stupid toffees for change.

And the guy with the long pinky nail who served the vada pav, and was occasionally seen scooping out earwax with the same finger, still gives me shudders.

As a result of which, most of the students stay scattered in the area in PGs. This doesn’t seem like a big problem on the face of it, but it is, I’ll tell you why.

There is absolutely no solidarity among the students.

Because of the scant class hours (3-4 hours a day), and the fact that the students don’t stay together on campus, we are a very disjointed mass of students, divided into small cliques. And it is so sad, that a lot of us graduate without even knowing the names of all of our classmates.

Unless you are a social outgoing personality, it is very difficult to make friends here, and the loneliness can drive you into depression. Especially, with all the free time, it can pull you down a lot.

Additionally, since we barely get to interact with our seniors and juniors, there is almost no form of guidance to be received and given.

You just plunder on, without any form of mentoring, and believe me; it seriously disadvantages your growth as a student, as a professional and a person.

People talk a lot about the various diplomas that ILS offers, and how you can choose to learn more of any field of law you want to.

I have undertaken two such courses from college and I assure you, it is a load of faff.

Classes are cancelled a lot; they are uninspiring, highly soporific and mind numbing. In short, pretty useless.

This year, (2014-15) only AZB came to recruit among law firms. And a few corporate houses and banks. A lot of the students don’t sit for placements, the above facts should make you understand why.

The placement cell is run by stubborn archaic minded professors, and the administration does not budge an inch when students try to take it upon themselves to inject some life into the dying animal that is ILS placements.

The placements, in short, are completely pathetic and leave numerous students stranded without jobs after graduation.

And as far as internships are concerned, you are pretty much on your own.

In my five years of college, at different points, three students have committed suicide, but there was not even a minute of silence held for any of these occasions.

The most horrible aspect of ILS, according to me. NO ONE CARES. Not professors, not students. About anything at all.

People continue to pay money and get papers re-evaluated, continue to drool through utterly unengaging lectures, continue to tolerate the complete lack of any form of intellectual stimulation without a flinch. And I am equally guilty of this. You might say, why didn’t you try and voice it, why didn’t you make your grievances heard.

A handful of students, now and then, try to make some kind of point by trying to collectively be heard. But like I said, no one cares, and a voice or two can and always is easily ignored.

The entire effort is completely wasted if you alone try to challenge something and over time it kills any zeal of even trying to bring a change. You just accept the institution for the shit hole it is.

In my five years of college, at different points, three students have committed suicide, but there was not even a minute of silence held for any of these occasions.

There was no conversation about it.

All of this was just completely swept under the carpet. Like dead bugs. And ILS has the audacity to call itself an institution of law.

I understand that law school is a journey of discovery more than anything else. Of growth and learning. None of which happens at ILS.

It might boast of resources, but does absolutely nothing to facilitate intellectual growth, or discussion, apart from some namesake college cells, which die out too, once the proactive students pass out.

Also, this is just my version. An average, not very social individual, who utterly fails to suck up to professors who can give me that enviable international law moot, or give good marks in my only ever class moot (lone practical activity of the five years).

But, as far as the defeated sense of frustration that ILS Pune makes you go through, I am sure I speak for many.

People might question why I chose to write this anonymously. It is not because I am hesitant of debate, it is just because I am ashamed to associate myself with this place.

The rest is up to the reader to infer.

Note: This is a reader’s blog.

We urge other readers to write about their colleges and send the write-ups to tanujkalia90@gmail.com 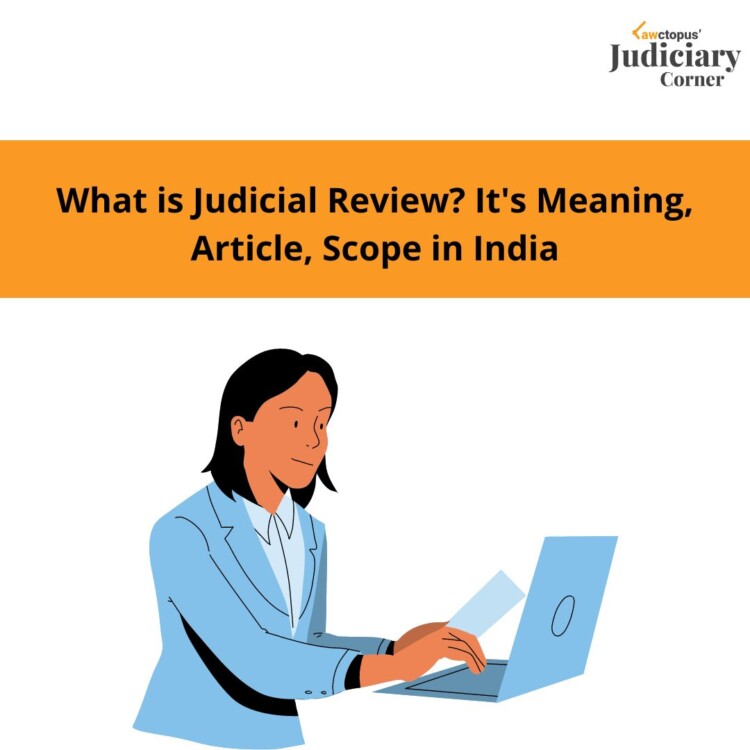 What is Judicial Review? It’s Meaning, Article, Scope in India