Editor’s note: The following details were submitted by a student of HPNLU and the student has requested anonymity. 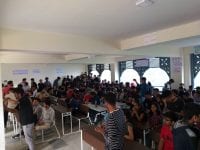 Students at the Himachal Pradesh National Law University, Shimla have raised their voices, yet again, in a peaceful protest against the administration for not giving heed to the various demands of its students. The protest is being called #InsaafHPNLU2 by the students.

University administration has failed miserably in providing even the most basic amenities to its students even after charging such an extortionate fee. It has always shielded itself behind the apparent curtains of ‘infancy’ of the establishment, but this is the end of such incompetence.

Following is a brief timeline of all the events that have happened in the past few days.

All the four years of the university came up with a proposal for the administration to consider; demanding the most common facilities for a university student such as:

The food quality being provided at the university is of extremely low quality. The raw material used in the process is cheap and the end results are horrendous, with students skipping meals in order to save themselves from such food.

Furthermore, for those who do eat mess food are greeted by insects, rubber bands, incense sticks, and the stench of kerosene oil. Utensils are also unkempt and are washed with plain water, instead of being scrubbed with soap. Wi-fi routers are installed in selected hostels with many of them being out-of-order most of the time. The campus itself does not have any wi-fi excluding the library, access of which, is also limited. Questioning the authority is of no use of this as they always have a new excuse for it.

The hostel rooms allotted to the boarders lack critical amenities and the ones that have been provided aren’t maintained properly. The rooms lack basic necessities such as clothes pegs, ample lighting, cleanliness etc.

Toilets and bathrooms of many hostels are in dire need of repairs with flushes not working and bolts not being installed. There is also not proper laundry facility available in any hostel, and the students have shell out copious amounts of money for this.

The vice-chancellor in response to the proposal said, “You should have not come to this law school if you can’t afford the fee, you should have opted for a traditional university” which is insensitive & unsympathetic on the part of her and the administration. Vice-Chancellor did show up at the protest but, after arriving on the scene, she made another derogatory statement and said, “If you can afford more fee, go to Jindal.” Following which, Registrar of the university chided a student for recording video of the ongoing protest.

Amidst all this chaos, a bright light was also seen when the university seniors provided food, water, and sleeping facility for 1st and 2nd years of the university on their own money since the university failed to provide food for the students on that particular night.

Day 2 began with the students arriving at the protest with hope which was soon demolished when a small delegation, which was was sent by the students to put forward their needs, came back with shattered hopes only to tell us how the Chancellor has denied acknowledging the demands, excluding the academics.

Following this, the university students unanimously decided to continue the protest indefinitely.

Later in the evening, the university administration issued a notice to shut down the university for a week in the wake of the on-going protest and instructed all the students living in the hostels to vacate the rooms and head back. Here is the link to the official students grievance letter.