Congrats on your success! Please introduce yourself to our readers

My name is Bhujali Chauhan and I hail from Bahadurgarh, Haryana. I completed my graduation in 5-year law course BA LLB (Hons.) from Institute of Law, Kurukshetra University in the year 2017.

Thereafter, I had been preparing for the judicial services examinations on my own and I got 24th rank in Delhi Judicial Service Examination, 2019.

I was interested in law from the very beginning. I feel that studying law gives a person a sense of awakening and he/she becomes more aware of society and develops rational and critical thinking. It broadens the mindset of a person and they start seeing everything through the glasses of the Constitution. Due to this, people progress on an intellectual level.

I strongly feel that every common man should read the Constitution. This way, one can make a difference in other’s life as a judge is unparalleled. It also adds a social dimension to my work life.

Besides, it is the work that can provide me with maximum job satisfaction since I had been dreaming about it for ten years now.

After my 12th grade results, a reporter from a local newspaper asked me what I want to do in the future, to which my answer was that I want to become a judge and I have still preserved that newspaper clipping as it is an immense source of peace and strength for me that I have wholeheartedly pursued my dream.

I see the courts and judges as revolutionaries and they are the new age freedom fighters that are tirelessly working for securing the rights of people and bringing about positive changes in the society.

What is the pattern of the DJS exam?

DJS exam has got three stages: prelims, mains and interview.

The prelims exam in Delhi Judiciary has one objective question paper of 200 marks. It includes questions pertaining to Law, GK, English language & Comprehension and Legal Aptitude.

The interview is conducted at the High Court of Delhi.

Have you appeared for other judiciary exams also?

Yes, I have appeared for the judicial examinations for the states of Himachal Pradesh, Haryana and Rajasthan. 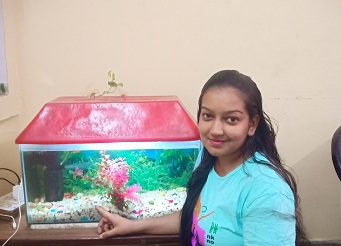 What was your overall strategy for DJS prelims?

When I started the preparation, I started with the mains examination in focus and because of that, I couldn’t clear the preliminary exams for a few states in the early months of my preparation.

Still, it helped me to clear my concepts and provided me with an edge in the Delhi exam as it is less memory based and more conceptual.

The initial failures in the other states made me realize the importance of specific preliminary exam preparation.

So, as soon as the notification of Delhi was out I started my targeted preparation for it. I started thoroughly reading the bare acts, solving the previous year exam papers of Delhi and all the preliminary exam papers of other states that were held for the year 2017-18.

For Delhi, one must be well versed with current legal developments and current affairs as well as general knowledge. For that I took the help of newspapers, current affairs were mostly done from various YouTube channels and website in the last two weeks before the examination. The habit of reading newspapers is very vital.

Also, I thoroughly read the landmark judgements given by the Supreme Court in 2017-18. It’s better to read the whole judgements rather than summary from blogs.

For English, I didn’t do any specific preparation at the preliminary stage.

For GK, I referred to book Lucent’s GK and solved the previous year’s mains exam question papers of GK which helped me identify the key areas from which GK might be asked like recent appointments, famous personalities, books and authors, sports events etc.

What was your overall strategy for DJS mains?

My strategy for mains was first to identify the key areas in each subject, then have an overall view of the whole subject and have in-depth knowledge about the key areas from all sources available.

It is important to understand the pattern of the exam and prepare accordingly. Since the questions in DJS are application based, I made it my priority to look at each section with an application based perspective.

Besides knowledge, time management while taking the examination is crucial as is framing the answers in a brief, crisp yet comprehensive manner. So, the preparation must be done keeping that in mind.

How did you prepare for the interview?

There was no specific preparation for the interview but I attended a few mock interviews at Rahul’s IAS and APS judicial academy after clearing Delhi mains.

During my preparation, I relied on many sources like books, notes, internet, journals and whatever other sources I could lay my hands on.

The major books that I referred to besides the bare acts are:

DJS has many local laws and other laws not asked in other judiciary exams. Which books did you refer for these? How did you prepare for these subjects?

For local laws, I focused on the bare acts and the case laws and took some help from Universal’s solved mains papers by Shailendra Malik.

What were your secret sauce recipes, if any?

The secret sauce is balance. Have a Balanced Approach towards life and spare time for some recreational activities, even during preparation days. Manage your study hours and have a focused approach depending on the pattern of the exam.

Even during the Examination, balance is important – don’t give too much time to the question you know and do try to attempt
the questions that you do not know that well.

For how long did you prepare and how many hours did you put in?

I prepared for one and a half years. The hours I put in varied day to day from 2-6 hours. In the days after the preliminary exam, the study hours increased to 9-10 hours.

I made sure to take short breaks after every hour and long breaks every three hours. It improves concentration.

Do you think if one is aiming for judiciary exams he/she should start preparing from the college itself, if yes then what would be the strategy for the same?

Yes, they definitely should. My college days at Kurukshetra University certainly helped me in the exam preparations. Many of the subjects in the syllabus for judicial examinations are the same as we were taught in college.

My tips would be to focus on the important subjects well during the college days, inculcate a habit of reading newspapers and law journals, stay in touch with the recent legal developments and landmark judgements, participate in debates, public speaking competitions, moot courts (it helps immensely in interviews) and attend legal seminars.

A student can get well versed with the bare acts during his college days itself and prepare short notes, especially for the minor subjects.

Preparation for language and general knowledge papers can be started during the college days. Keep eyes on the judicial service exams taking place during your college days, try to get hands on the question papers and solve them.

What were some challenges you faced/mistakes you made, and how did you overcome them?

The challenges I faced were basically lack of guidance and ignoring the preparation for the preliminary exam as I was preparing with mains exam in focus. But after I failed to clear preliminary exams of a few states I started giving equal importance to solving MCQs.

I observe that most of the students tend to make this mistake. Some put their whole focus on clearing the preliminary and after that fail to clear the mains because of the same. So a balanced approach should be adopted for both the stages of the exam.

One more mistake I made was to keep jumping from one state to other state exams during the first year of preparation. Since the pattern of exams is different for all states it’s better to prepare with two states in focus. Later I started preparing only for Haryana and Delhi.

What were the most important & right things/strategies you implemented?

The strategy is to be consistent. The focus should be to not set unrealistic goals. Identify where you stand, how much knowledge and clarity you have to begin with. Take your time if you are a slow learner but make sure every day you know something more than you knew yesterday.

It is important to keep revising the material periodically. It’s detrimental to complete a subject and then ignore it for six months.

There should be a weekly revision of all that you have read through that week and a monthly revision of the things you did in the previous months. Language and GK preparation should be done throughout and not during the last days before the exam.

Did you take coaching from anywhere? If yes, how did it help? What are some good coaching institutes which candidates can go for?

I haven’t taken any coaching I attended a few mock interviews at Rahul’s IAS and APS judicial academy after clearing Delhi mains.

Coaching does help a student a lot as it provides able guidance and helps you achieve results faster.

Coaching is like a restaurant where you get readymade food while self-preparation is like your kitchen where you have to cook for yourself from whatever ingredients you can collect. But ultimately it’s on the student to eat that food and absorb whatever knowledge they can from it.

Though I haven’t attended any coaching classes, going by the records of selection, some good classes for students are Rahul’s IAS, APS judicial academy, Ambition.

How was your interview and what sort of questions were asked?

It comprised of 3-4 general questions about the environment at district and high courts and my internship experiences. The interview went great since I was calm and confident throughout.

Anything else you would like to tell our readers?

The most important thing is to believe in yourself throughout the preparation.

Even if the motivation does not last, try getting motivated every morning that you are wholeheartedly pursuing your dreams and you would give whatever it takes.

Never feel that you are alone, whatever mental state you are in, whatever everyday situations you are facing, I assure you that most of the aspirants are going through the same.

Most are facing anxiety, stress and self-doubt, parental pressure, peer pressure, hectic schedules, and maybe even financial hardships with time running out of their hands. Many are balancing higher studies or other professions with their preparation.

So, it becomes crucial to keep your morale high even when you are facing the worst crisis since all battles are first won in the minds of great men. The challenges you face are the opportunities to excel.

Wash your hands with soap and water after you cough or sneeze and dispose off used tissues in a closed bin.

Washing hands frequently and thoroughly plays a key role in protecting yourself from #COVID19.

A woman with COVID-19 should be supported to:
☑️ breastfeed safely
☑️ hold her newborn skin-to-skin
☑️ share a room with her baby

.@DrMikeRyan answering a question about whether it is safe for children to go back to school 👇

My thoughts and heart are with people in Beirut, #Lebanon, who lost loved ones or were injured in the explosion this afternoon. @WHO stands ready to support the government and #healthworkers in saving lives.

Our hearts and prayers are with the thousands of people affected. We are woking with the @mophleb to make sure trauma supplies are available.

.@DrMikeRyan answering a question about whether it is safe for children to go back to school 👇

Our hearts and prayers are with the thousands of people affected. We are woking with the @mophleb to make sure trauma supplies are available.