In this post, they write about the book, why they wrote it and the challenges in researching for such a book.

What is the book about?

As the title of the book suggests, the focus of the book is on India’s intellectual property law dilemmas. In particular, we wanted to explore the history and politics surrounding Indian IP law since the country achieved independence from the British in 1947.

As we discovered during the course of our research there are some fascinating stories regarding the evolution of Indian IP policy over the last 70 years.

For example, in the fifties, the government had proposed radical changes to Indian copyright law in the spirit of socialism that thrived in India at the time.

Given the political climate of the time, the amendments should have sailed through Parliament but a surprisingly strong lobby of Indian authors and poets, several of them members of Parliament blocked the radical changes to Indian copyright law.

We also cover some of the more recent developments such as the politics surrounding Novartis case, the film industry, the recent copyright amendments in 2012 and the basmati rice case.

Apart from the heavy policy discussions, we also covered some of the stranger aspects of IP such as its importance to religion – turns out that the most valuable asset of our numerous god men is actually IP in their books and videos!

Why did we write it?

As long time contributors to SpicyIP we have seen a lot of interest in IP law and policy from law students. One of the reason for that interest was because of the simple, easy to read format that we followed on SpicyIP.

We’ve often received emails from students, who wanted to know more about the subject, asking for an easy to read book on Indian IP.

Most of the published literature on Indian IP are either commentaries targeted at practitioners or heavy academic books – not exactly the good starting point for students. We wanted to write an easy to read book which told the story about how Indian IP policy has evolved over the years.

The focus of our writing effort was to keep he the narrative both simple and engaging and so we chose a theme which focused on historical and political aspects of Indian IP, especially since it is an area that has been mostly ignored within India.

Do you need to know IP before you read it?

The short answer to this question is, no.

We do discuss some case law and legal provisions but the overwhelming focus of the book is policy. 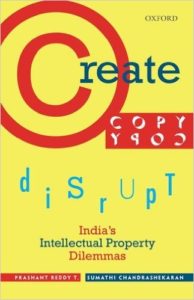 What were the difficulties in writing and researching for such a book?

Writing this book was not easy. To begin with, there is not much written on this theme, so we had to research a lot from primary material.

The problem with trying to research from primary material is that it is very difficult to source historical material in India. So we had to fall back on more unconventional research methods – filing applications under the Right to Information Act, 2005.

Although some of our information requests were blocked on the grounds of parliamentary privilege and misplaced documents, we did receive a fair share of information from these multiple sources.

Actually writing the book turned out to be a lot more difficult than expected because we were trying to keep the use of legalese to minimum.

We wanted to ensure that the language was kept simple and that was a surprisingly difficult task because as lawyers we usually write and speak with a lot of legal jargon.

You can buy the book on Infibeam here.

Believe in yourself - you're more powerful than your tobacco addiction. Speak to Florence, WHO's digital health worker for advice on how to quit tobacco today.

It's time to say #NoTobacco 🚭

Last month the 🔟th #Ebola outbreak in #DRC 🇨🇩 was declared OVER!

Let’s meet some of the heroes of the response 👉🏿 http://bit.ly/37VswLU