Sixteen-Eighteen-year-old students (some older too), some of whom have been preparing for CLAT since 1-2 years, were seen crying in the examination centers of CLAT 2018 which was organised today between 3-5 pm (well, that was the official timing). Some of the students got into fights with the invigilators, who were as helpless as they were clueless.

These are facts and not Arnab Goswami like exaggerations on how poorly conducted CLAT 2018 was.

The CLAT body has hence managed to do again, what it’s best known to do.

A massive, utter mismanagement of an exam upon which rests the future of nearly 50,000 young students.

We are compiling responses of students from various centers in India. However, the blame should squarely lie on the CLAT body (especially NUALS Kochi) for the pathetic conduct of CLAT 2018.

According to two students who gave CLAT 2018 at the RR Assessment Center at Okhla, Delhi, the following issues were faced by students:

1. The computers hanged and there were other technical problems (for example, the question paper first appeared on the machine and then vanished), making students lose as much as 30 minutes from their allotted 2 hours.

2. Because of the above, some students stood up from their seats, started fighting with the invigilators present, thereby causing a massive commotion.

3. Queries of many students were simply ignored by the invigilators present.

4. The venue had poor infrastructure. In the sweltering heat of Delhi there were no ACs, with many students complaining of headache and ill-health.

UPDATE [May 13, 6.50 PM]: Students at Trinity College, Bhopal confirmed the problem mentioned in point 1 and faced the following problems too:

6. Clicking on the ‘Next’ button would take you 3 questions forward and then the student had to come back to the previous questions one by one, losing precious time.

7. If you clicked on the subsequent questions (instead of clicking on the Net button), your answers would not get saved.

UPDATE [May 13, 7.30 PM]: A student from the CLAT center at Chandigarh University, Kharar, Punjab confirmed the problems about the glitches in the system, the delay in questions appearing on the screen, the cluelessness of the invigilators present and added:

9. The system used to get ‘stuck’ in between. Though the timer would stop, it was frustrating for the students taking the exam.

10. The biometric (welcome to the Surveillance State) verification which is done before the exam too was riddled with problems. The students had to wait for 20-30 minutes as some systems were hanging leading to unnecessary stress.

UPDATE [May 13, 8.10 PM]: A student from Marudhana Ventures India Pvt. Ltd. Center, Jodhpur (or is it the Umrao B.Ed College center?) told us of a quandary which would answer Shakespeare’s ‘What’s in a name?’ question once and for all:

“Students appearing for UG and PG CLAT exam at Jodhpur faced the same problems because of the mismanagement of CLAT representatives and organising body of exam centers.

One of the centres, Marudhara Ventures India Pvt. Ltd. was located some 20 kms from city [and] is not known to anyone because the real name of the centre was Umrao B.Ed College because of which students have to face many problems in locating the exam centre. There was no electricity [electricity cuts], systems were not working problem and various other similar problems were faced by students like mentioned above.”

11. CLAT body failed to mention the real/popular name of the Center, leading to students facing difficulty in locating the centers.

12. Electricity cuts (which was also told to us by the student at the Chandigarh University center). 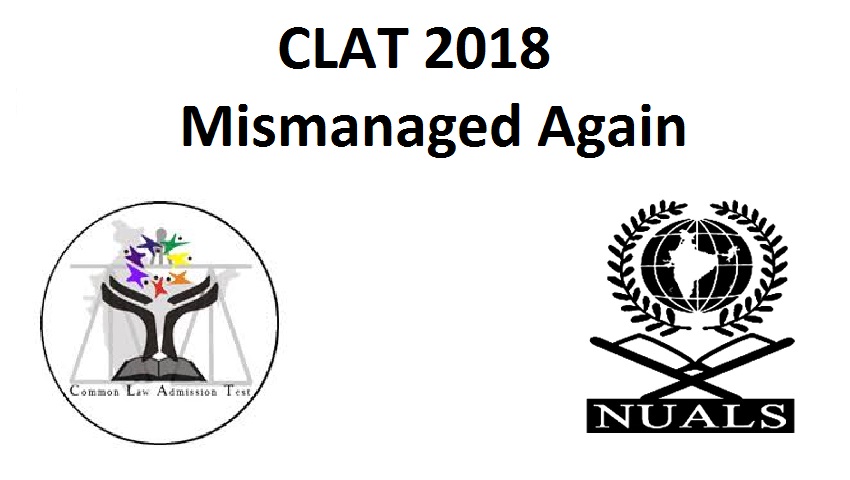 UPDATE [May 13, 8.40 PM]: Commenters in the know of things from DD College, Dehradun; OM Institute of Technical Education (OMITE), Hisar, Haryana; and IIMT College, Greater Noida too have confirmed the technical glitches.

A commenter from the OMITE, Hisar center added:

13. Pen and paper [to solve mathematical/logical reasoning questions and any other question which would require these tools] were not kept beforehand which wasted time of students.

A commenter who took CLAT 2018 from the IIMT College center added:

14. There were no seats allotted to us in a systematic or pre-planned manner. We were told to sit anywhere we can find a vacant seat.

15. Invigilator himself got into an ugly fight with his support stuff.

16. The test at [the] center didn’t even start at 3 pm. Even after repeatedly asking the officials, all we were getting was ”You’ll get 2 hours, doesn’t matter if it’s from 3 or 4″.

17. The practice test (to help students familiarize themselves with the online mode of exam) was not done as the center was running late.

18. The center was not properly ventilated and was suffocating for most of the students. (Do note that some centers had properly functioning ACs all the time. Such physical comfort/discomfort can easily mean a difference of 2-4 marks which can make or mar your CLAT prospects).

19. The mouse was not working properly.

This puts NUALS Kochi, the national law school which conducted this year’s CLAT and the entire CLAT body in a huge spot of bother.

Many students are demanding a reconduct of CLAT 2018 and some students even want their application fee of Rs. 4000 to be returned to them.

It’s disgusting and shameful that the premier law entrance exam which has been running since 2008 should run into problems year after year.

A police complaint has been filed against 2 invigilators at the Dr. Radhakrishnan Insitute of Technology, Jaipur. The invigilators promised 10 minutes extra-time to the students but allegedly gave 40 extra minutes.

Lawctopus is in receipt of the police complaint.

According to a tweet, there were other issues too. See below:

20. Near the end of the exam, when I clicked on the “Submit your exam” button, the computer/system hanged and I did not receive any confirmation receipt indicating that my exam was completed and I attempted X number of questions. I understand that such confirmation receipts are displayed on the screens of all applicants.

21. No concrete solution to the problem (i.e. not being shown a confirmation receipt that was supposed to be generated) was provided despite the fact that I stayed at the exam centre till beyond 6 PM to correspond with the centre observer and other officials present at the centre.

Tell us about your experience of CLAT 2018 in comments below. Please do mention the name of your center.

We have summarized the issues into sub-heads below:

If you want to read up on some fun-advice about the law school life do read our articles below (some of them are old, but most of the advice is still relevant):

Tell us about your experience of CLAT 2018 in comments below. Please do mention the name of your center.

Disclaimer: We try to ensure that the information we post on Lawctopus is accurate. However, despite our best efforts, some of the content may contain errors. You can trust us, but please conduct your own checks too.
Categories: Blogs, News, Advice, Law School News
Tagged: clat 2018, clat fiasco, clat mismanagement