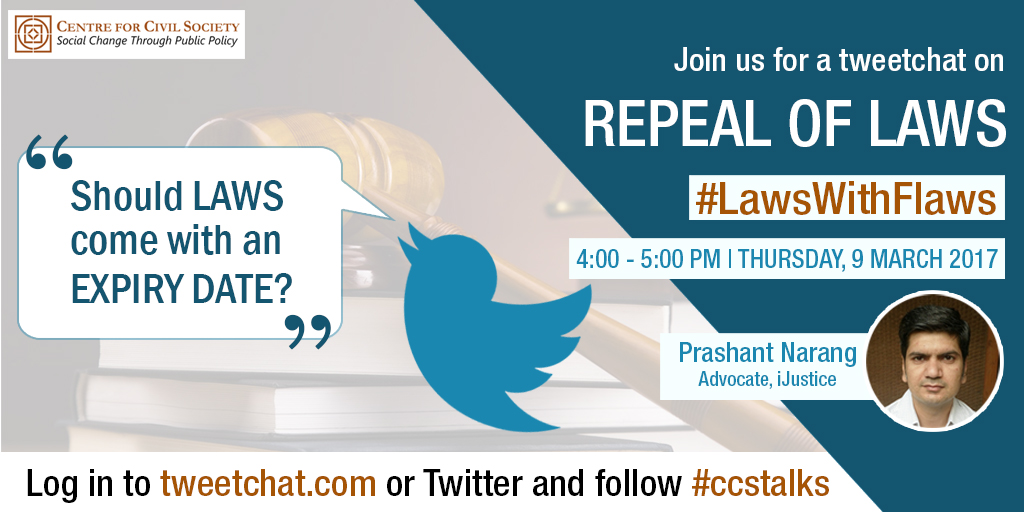 Tweetchat on Repeal of Laws

Centre for Civil Society wishes to invite you to join the nationwide live chat on twitter on Repeal of Laws.

CCS along with other like minded organizations, advocates and individuals initiated the Repeal of Laws exercise by preparing a compendium of 100 laws to be repealed for the Central Government of India; out of which 23 have been repealed till now.

Building on that we also initiated this process for the states of Delhi and Maharashtra by preparing compendiums with 25 recommended laws each to be repealed.

Supreme Court advocate Prashant Narang who heads the Public litigation initiative of iJustice shall be present as an expert during the live chat.

• Loss of life due to #COVID19
• Accidental death on account of #COVID19 related duty.

👇#FAQ's on Insurance Scheme for #healthworkers

Watch my interview with @DDIndialive at 10:00 PM - my views on action taken, preparedness & updates on #COVID19.

You can be distant and you can be social.

According to State of the World’s Nursing Report:
☑ Governments must invest in the massive acceleration of nursing education
☑ 6 million new nursing jobs must be created by 2030
☑ Investments must be made in nurse leadership

The #COVID19 pandemic underscores the urgent need to strengthen the global health workforce, of which more than 50% are nurses 👩‍⚕️👨‍⚕️.

On this #WorldHealthDay, WHO & @ICNurses @NursingNow2020 are launching the 1st ever State of the World’s Nursing Report: http://bit.ly/NursingReport2020

Today, we celebrate the work of nurses & midwives by showing our appreciation for their bravery, courage & resolve in the global #COVID19 response.

Tell us who your favourite nurse or midwife is 💐.

WHO understands that some countries have recommended or are considering the use of both medical & non-medical masks in the general population to prevent #COVID19.

On 6 April, WHO issued guidance & criteria for countries to use in making that decision 👉 https://bit.ly/3c4ku4h