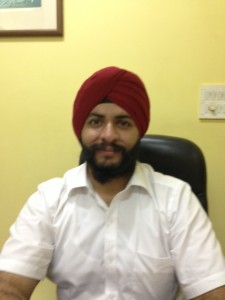 Lawctopus would like to extend its warmest gratitude to Ms. Juhilata Puntambekar of SLS, Pune for interviewing Adv. Sushant M. Singh.

Sushant is an Advocate in Hon’ble Supreme Court and Delhi High Court.

He is the Managing Partner of Sushant M. Singh & Associates, New Delhi.

Here is the 1st part of the interview, a very honest one at that.

Q. Hello Mr. Sushant! Tell us something about yourself?

I am a practicing advocate in Delhi High Court and Supreme Court of India.

Normally, people tag me with IPR but I’d like to be considered as “an arguing counsel”.

For now, being young, I do as many cases as I can in several courts across India so that I have a wide exposure.

Q. Describe your childhood in brief? Your sources of inspiration i.e. your driving forces?

My childhood has been, if I say, in a regulated regime. As I was a son of an advocate who was disciplined in his profession. My parents have been backbone for me and one can say that they are driving force for me also.

This is due to the reason that whichever way they asked me to go, I followed that path.

My sources of inspiration, as I mentioned above, are my parents as I have always followed them though some time late but never disobeyed them or let them down.

Otherwise, my failures are my driving forces.

I am personally a Gita (Holy Scripture of Hindus) loving person and therefore I believe in the theory of Karma (action) which is that one should work every day every time as Karma is one’s Dharma (righteousness or duty).

This has been one of the sources of inspiration for me, which has led me get going every time.

Q. Why did you choose law? Did your father in any manner influence your choices and conviction?

Frankly speaking, my choices to the extent were influenced by my family’s choice which was that I should become a lawyer.

However, as and when things progressed, I continued pursuing law and ultimately started liking and enjoying it.

This is exactly what has happened with me when I joined law. I scored very goods marks in 12th standard and I was admitted as a commerce student in B.Com (Hons.) Course.

Thereafter, I was admitted to Law College after my family persuaded me to join law.  I was reluctant in the first year to continue with the said course which I had found quite alien to my stream being a commerce student, but things gradually changed and I remained in the said stream of law and now being interviewed by you as a lawyer.

My convictions have never been influenced by anyone.

Q. How was the law school journey?

My law school journey was quite exciting. In the first year I was taught the subjects relating to Arts which I did not find favorable. Things got very boring in the first year. Teachers used to ask me many questions which I could not answer and hence I became the laughing stock of the class!

The projects which were given to me week after ever week were painful and pressurizing.

It was also at this point of time that I thought I would be enjoying college life for 2-3 years but in reality, I  actually landed up going to library even after 5.00 pm.

Indeed, it was tough and pressurizing but I think it was right at that relevant time in order to make the law students aware that they have to remain along with books and spend time with them.

In second and third year, my acceptability of law in my life increased as I became used to the system of Law College. Fourth and Fifth years were most the exciting years where I also used to participate in Moot Court Competitions after taking inspiration from highly competent students.

I did my internship only with one lawyer who was a junior of my father in Tis Hazari Courts, Delhi.  During the third year, I joined office of my father and started going to international conferences as my father wanted me to have a wider exposure.

Overall, my law school training was exciting as well as challenging.

Q. Things you liked to do in the law school?

Things which I liked to do in the law school include the Moot Court Competitions which came to my share quite late.  I also liked to indulge myself into several other extra-curricular activities but I did not get much chance to do so.

Writing research papers and thesis and giving Power Point Presentations were also quite exciting  (really!) which helped me a lot.

Q. Things you’d advise others to stay wary of?

The age of college student is quite young wherein he/she has less responsibilities they tend to tilt towards anything which comes their way. It becomes quite fascinating for a young person to indulge into adventures. Due to this, young students often make mistakes during their college time.

The said mistakes include drugs, alcoholism, fights with other students and getting too much involved with the opposite sex.  All these aspects in the young age look quite fascinating but at the same time they affect one’s career as a law student.

My biggest achievement is ‘my acceptability’ as a law student which grew year-by-year. As I said, I was considered as the least participative student in the first year.

However, at the end of my college life, comments in my annual book records proclaimed that I was academically brilliant and also recorded messages such as ‘Tussi Na Jao’.

Another achievement is the ‘confidence’, utilised in discussing any topic. This habit has helped me a lot in becoming a good lawyer and for that I am really thankful to law college.

My upbringing had been very regulated. My father was in the processing of being elevated to the High Court Bench as a judge (Hon’ble Justice Manmohan Singh) at the same time I became a lawyer.

Therefore, I compromised over number of things in lieu of my growth in the career. My First failure, is that I did not look back from my law life to find time and engage myself in sports and other activities.

Another failure would be lack of social relations.

I was always involved in one case after another and I always pushed myself and my law firm to become bigger and bigger. In this process, human relations and social relations were kind of tossed aside.

But now, I am trying to overcome these shortcomings by striking the right balance.

Q. Subjects you liked the most? Any particular Professor who inspired you?

Editor’s note: The post was first published on 26th October 2013.

Disclaimer: We try to ensure that the information we post on Lawctopus is accurate. However, despite our best efforts, some of the content may contain errors. You can trust us, but please conduct your own checks too.
Categories: Career Advice, Career Interviews
Tagged: career talk, delhi, intellectual property rights, ipr, ipr as a career, Sushant Manmohan Singh