There’s a notice doing the rounds! It’s been shared and tweeted widely and even reported upon. It seems the Bar Council of India has finally woken up!

Issued by the Bar Council of India on 11th September, 2014 and supposedly sent to all law colleges in India, it says that law students should only intern during their vacations. 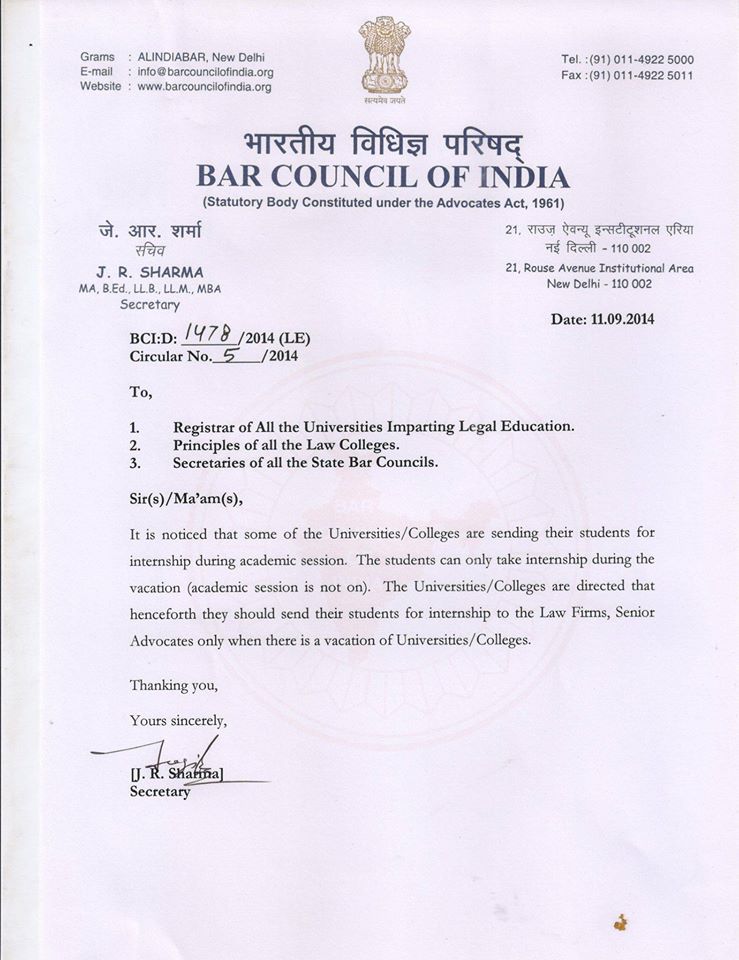 You can do many things with this notice. Here are some options:

In case you have other interesting ways in which this notice can be used, please leave a comment below!

Such disrespect to BCI, you’ll say. I have reasons for the disrespect, and I’ll start my attack, now.

Minimum Period of Internship According to the BCI

Have a look at this link HERE.

It further reads “Rules on standards of legal education and recognition of degrees in law for the purpose of enrolment as advocate and inspection of Universities for recognizing its degree in law […] of the Advocates Act, 1961 made by the Bar Council of India in consultation with Universities and State Bar Councils.”

“25. Minimum Period of Internship: (a) Each registered student shall have completed minimum of 12 weeks internship for Three Year Course stream and 20 weeks in case of Five Year Course stream during the entire period of legal studies under NGO, […] and other such bodies as the University shall stipulate […]”

Provided that internship in any year cannot be for a continuous period of more than Four Weeks and all students shall at least gone through once in the entire academic period with Trial and Appellate Advocates.

(b) Each student shall keep Internship diary in such form as may be stipulated by the University concerned and the same shall be evaluated by the Guide in Internship and also a Core Faculty member of the staff each time. The total mark shall be assessed in the Final Semester of the course in the 4th Clinical course as stipulated under the Rules in Schedule II.

1. You cannot intern for more than 4 weeks at a stretch.

2. You must have interned at least once under a Trial and Appellate court Advocate.

3. In the final semester, your’ll be marked on an ‘Internship Diary’.

Thousands of internships are done each year which are for a ‘continuous period of more than 4 weeks’.

Dozens of batches of law students have passed, without ever having interned with a Trial court advocate.

I know no one (and it may sound cocky, but I know a lot of law students, including 1000+ students from NUJS, Kolkata) who has religiously maintained an internship diary or has been marked on it.

And forget, 20 weeks/12 weeks worth of internships, many law students do not intern at all!

The BCI database that doesn’t exist

Point number 26 [of the same link] is even more interesting.

Had the BCI implemented what it says it will do in point number 26, Lawctopus might not have even come into existence.

Here is what point number 26 says:

We have never come across such a list. No one has.

The Bar Council of India clearly hasn’t moved a finger to work on such an important task.

Well, let’s just say that issuing a notice is easy, but doing the work, which requires time, money, effort, expertise and vision, that’s difficult, and of course and the Bar Council of India has never really done the ‘good, difficult work’.

Interestingly, in an interview to Legally India here, BCI secretary Jogi Ram Sharma, who had signed the letter says, “If out of 60 in a class, 20 people are interning how will the class be filled? We cannot regulate this way.”

Well, the first step BIC can take to ‘regulate’ is to keep up the promises it has declared publicly.

Or if the BCI cannot regulate in this way, then it should regulate by getting out of the way.

A suggestion to law students

Write a letter or an email to the BCI telling them this:

This is to inform you that your notice disallowing students from interning during non-vacation periods severely restricts our internship slots.

The lawyers willing to offer us internships are few and will all be ‘taken’ during the limited time we have vacations.

Just to aid your thought process, please do note that the vacation periods of many colleges clash.

I’d also like to bring to your kind attention that the database of lawyers for internships which you’ve promised in the ‘Rules of Legal Education’ has never been published.

I’ll be happy to adhere to your notice once such a list is published.

The badly regulated and thus suffering.