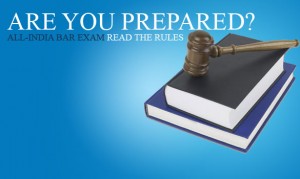 The All India Bar Exam is more affectionately referred to as “All India Bogus Examination” by the candidates taking the exam.

The bogus parts are spread out evenly throughout the AIBE timeline.

The Bar Council of India first decided to implement it strictly as a necessary step towards an authentic legal practice when the 1st All India Bar Examination was conducted on 6th March, 2011.

The 4th All India Bar Examination was conducted on the 9th December, 2012 in absolute mayhem and chaos.

The exam was cancelled in Jaipur and Bhopal centers due to shortage of question papers. The organisers should have anticipated such shortcomings after making registration provisional for the exam takers.

This happened in the first place because of the incorrect registration process which rendered hundreds of paid applicants as unregistered.

Even shams like the AIBE can be masqueraded as important, provided there is a larger interest, a seemingly bigger cause. However, the All India Bar Exam is surprisingly has smaller dreams and a mellowed ‘purpose’.

1. To assess an advocate’s ability to practice the profession of law.

2. To assess the legal capabilities at a basic level.

3. To set a minimum standard for admission to the practice of law.

4. To assess an advocate’s analytical abilities and basic knowledge of law

ABOUT THE AIBE QUESTION PAPER 2012: Questioning the Question Paper

Bar Council of India introduced a new 100-questions model test paper for the December 2012 AIBE, which included questions requiring the candidates to possess general and historical knowledge relating to the law and the constitution.

Candidates needed to score only 40% of the total marks to pass the exam.

An entirely new syllabus and subject weightage table was released by Bar Council of India weeks before the AIBE was to be conducted: 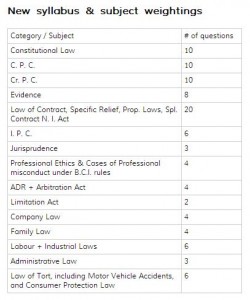 Bar Exams in US – Another story altogether

In US, the bar exams are state administered and are spread over atleast two days and consist of essay questions which test knowledge of general legal principles and jurisdictions. Recently, the Uniform Bar Exam has been adopted by 13 jurisdictions which consists of –

b. A multistate essay exam which tests candidates’ analytical and communicational skills;

c. A multistate performance test where candidate has to perform a standard lawyering task (mostly preparing a brief) using the case file and material provided to them.

The well rounded US Bar Exam

Apart from these exams, several in-depth analyses are made to judge the ethics and morality of the exam takers. The well roundedness of the procedure makes bar exam a much feared event in the life of all graduating students.

The fact that US started conducting their bar exams a couple of hundreds of years before us may be the reason of their astounding edge and effectiveness as compared to our sad state of affairs.

In radical comparison, the Indian bar exam is not exactly an exam. (Maybe it’s a race?) For starters, it is an open book exam where candidates can bring bunches of individually prepared notes.

Then, the 2012 AIBE was not about bringing about the best foot forward in terms of reasoning abilities.

On the contrary, it judged the “speed at which one could find out the relevant sections from a particular act” which was already mentioned in the question! Not many questions dealt with inherent application of mind, a trait which is so dear to the legal profession.

None of the prior versions of the All India Bar Exam have taken place without any logistical hitches or legal debates. After the controversial conduct of previous examinations, the Supreme Court had allowed the candidates to practice “provisionally” until the conduct of a fresh AIBE.

This time the results were declared on 25th and 26th of January, 2013 where BCI put up a prior disclaimer that “any inadvertent error could not be ruled out”.

That statement is accommodating enough to explain errors like “non – existence of roll numbers in database” and the fact that a large number of results were withheld for reasons best known to the organising committee.

Following the debacle, a Public Interest Litigation was filed in the Gujarat High Court, which culminated into the BCI resolving to their previous tactics of allowing all candidates provisional practice for six months.

Basically, taking or not taking the Bar exam really does not make a difference because the verdict gets postponed by every few months.

This comment was made by Srishti Sharma who took the December 2012 exam – “It was an absolute farce. The exam was about how quickly you can open the bare act and pick out the answer. The questions also named the act so you don’t even have to make that effort. They tried to make it an open book – but forgot it should be application based. Only 2-3 questions required actual application of mind. Anyway, the bar exam doesn’t fit into our procedural functions. We already had our lawyer ID cards issues to us which is unconditional of you passing the AIBE.”

Useful Links for the All India Bar Exam

Click HERE to read an article which covers the logistical errors and the legal questions written by Kian Ganz from Legally India.

Click HERE to read a sponsored article (from BarHacker) which gives free tips and tricks to breeze through the Bar Exam. It outlines which subjects should be taken up in greater details and which ones should be absolutely avoided.

Click HERE to go through an article been authored by Ramanuj Mukherjee for Bar and Bench where he discusses about the simple tips and tricks which can be utilised by the exam takers in the absence of exam material officially issued by BCI. In the overview, he talks about the importance of creating and abiding by a particular strategy and managing time.

The excuse of a new practice cannot be stretched over more than 2-3 years. Bar Council of India needs to implement stringent procedures to regulate its own conduct in terms of organising the All India Bar Exam. One can only hope that the subsequent bar exams uphold some level of dignity and prestige associated with an exam which could otherwise affect your right to practice as a lawyer.