Please introduce yourself to our readers.

I am Akaant K M. I am a litigating lawyer practising primarily in the Constitutional Courts and the National Company Law Tribunals.

What was your school-life like? Who and what motivated and inspired you?

I was born and brought up in Malerkotla, a small town near Ludhiana. My family has always emphasized on good quality education. While my parents always encouraged me to take up cricket as a serious career option, I think the overall emphasis on education in the extended family was what made me focus more on studies.

My school life started in my hometown and was completed in Chandigarh. It is in that case, a little difficult to keep in touch with everyone, no matter how hard one tried. Those days the most a person had was one Nokia phone (the one with that popular snakes game), let alone Facebook, Instagram, Snapchat that are so effective in helping people stay connected merely with a smartphone in hand.

Nevertheless, I have many fond memories. Cycle racing every day to tuition classes, waking up every weekend to gather everyone to go play cricket. Spending every free minute of the day playing outside.

During childhood, looking at the manner in which my parents lived their lives, the stories about my taujis’ struggles in carving a space for themselves, I am generally inspired by the sheer discipline and the mental stability they possessed in the conduct of their lives.

To see the level of responsibility my mother carried always leaves me astonished; probably because I can only aspire to have such a strong character. Her intrinsic sense of belief in her strengthens were her defining trait. I think to be at peace in one’s own mind is a trait that I always seek to inculcate into myself. How as your college-life? Who and what motivated and inspired you and how?

Getting into National Law University – Delhi constituted a major juncture in my life. The University campus became a melting pot with such varied cultures streaming into.

While I learnt the habit of sitting and reading at long hours in the library, filtering thoughts and constructing arguments, a process which, by the way, is unending; I also took up leadership roles and was always keen to explore co-curricular things that were offered there. Be it mooting, mediating or representing the University in sports competitions.

Over and above, I think I grew so much both in terms of attaining professional skills but also in an equally important part of life, the personality. The experiences I gained changed my perspective towards fellow beings.

There are many people from NLU – D who have inspired me. From seniors, I had Paramvir Singh, who possesses one of the most brilliant and sharpest mind. Then there was Devanshu Sajlan, who is one of the most intelligent, humble and a perfect all-rounder. He has not just been my senior but also a great friend during and even post law school.

While there were many others, I would for now also like to name Harshad Pathak, Vishwam Jindal and my batchmates Harish Chaudhary, Aayush Singhal, Kanwar Vivswan. These people are always my reference points to discuss not just about law but seek inspiration from as well.

What have been your biggest successes till now and what have your learned from them?

I think the biggest thing I have so far gained in myself is to “empathise”.

While professional and monetary gains, representing big clients or building research credentials are all crucial in evaluating one’s life, for the sheer simple reason that as humans we are competitive. Attaining tangible things becomes crucial since it is the easiest way to quantify one’s accomplishment and assess our ranking amongst our peers.

I think while coming from the family background that I did, then getting schooled at elite schools in Chandigarh and then at NLU- D, deep down I lost a perspective, a perspective to look from the point of view of others. Be it a first-generation lawyer, or a non – NLU grad, or a non- English speaker.

To constantly evaluate others on one singular, uni-dimensional parameter is the most underrated form of assault.

What have been your biggest failures till now and what have you learned from them?

My biggest failures, well there can be voluminous books that can be written about it in terms of both the scale and the magnitude.

From losing the closest people to not telling family and friends enough that how grateful I have been for having them in my life.

I think these failures are pinned to the top of the list. You have recently written a book/commentary on the IBC published by EBC. What interested you in the subject?

I started litigation in August 2016 and the IB Code came into force in December 2016. Then within a couple of months a specific bench was constituted in Chandigarh of the National Company Law Tribunal. When the NCLT replaced the erstwhile Company Law Tribunal which operated in only 4 metropolitan cities, there was an expansion of the NCLT to other cities.

I was fortunate to have some work come my way and then suddenly I was taking up active litigation and consultancy work in Delhi as well. So in that manner my interest in the subject of Insolvency and bankruptcy spiked.

What are the career prospects of being involved in the ‘Insolvency and Bankruptcy’ domain?

I think this Government has taken some major steps in expanding the breadth of commercial laws, which has in turn led to increased relevance of professionals and researchers in India. With IB Code, the role of Chartered Accountants, Company Secretaries became the focal point. Then the research and policy side of the law inevitably required more focused research into the law and what other changes may be required for better implementation.

The Insolvency and Bankruptcy Board of India (IBBI) led by a person of the stature of Dr. MS Sahoo has elevated the status of research to higher levels. The IBBI is a regulating body as well as performs delegation functions of enacting Regulations, apart from advising the government on policy decisions. Researchers will find the opportunities available in these areas to be immensely career building and intellectually stimulating.

Writing a book is hard. How was your journey of writing the commentary, finding a publisher, etc.?

I think the first and foremost thing is motivation and then comes the inclination and then finally, actually writing. I have always been inclined towards writing and researching; for the motivation I did not need to look beyond my tauji who, during the time he was in the UK, wrote a seminal work on “Control of exclusion clauses in England and India”.

For the writing stage, I am grateful to Dr. Risham Garg, my mentor and professor at NLU – D who has always been at hand to guide me. The journey may have been arduous while writing but due to the unflinching support from Mr Sumeet Malik and the editing and publishing team at the EBC, I remained confident that the direction of the work is sound.

The constant moral support from my parents, sister, jijs Prof. Kshitij Bansal, Divya, Sakshi, and Priyanka has been instrumental in keeping my spirits lifted.

What advice would you have for future legal writers?

I am not sure I am the ideal person to advise. I have always been a person who has worked in the extremes. So no set template has ever worked for me.

However, I will definitely say that anyone who wants to write, they should never be bogged down by the daily rigors of professional work. Writing is sanctimonious and a gratifying exercise, so just repose trust in that and keep writing.

If there were 5 free and open source links you’d want to share with someone who wants to grasp the basic of IBC (laws, regulations, case laws, videos, etc.) which links would these be?

I think apart from the IBBI’s official website, there is hardly any other portal to my knowledge where research material on the IB Code is readily available for free to study the basics. 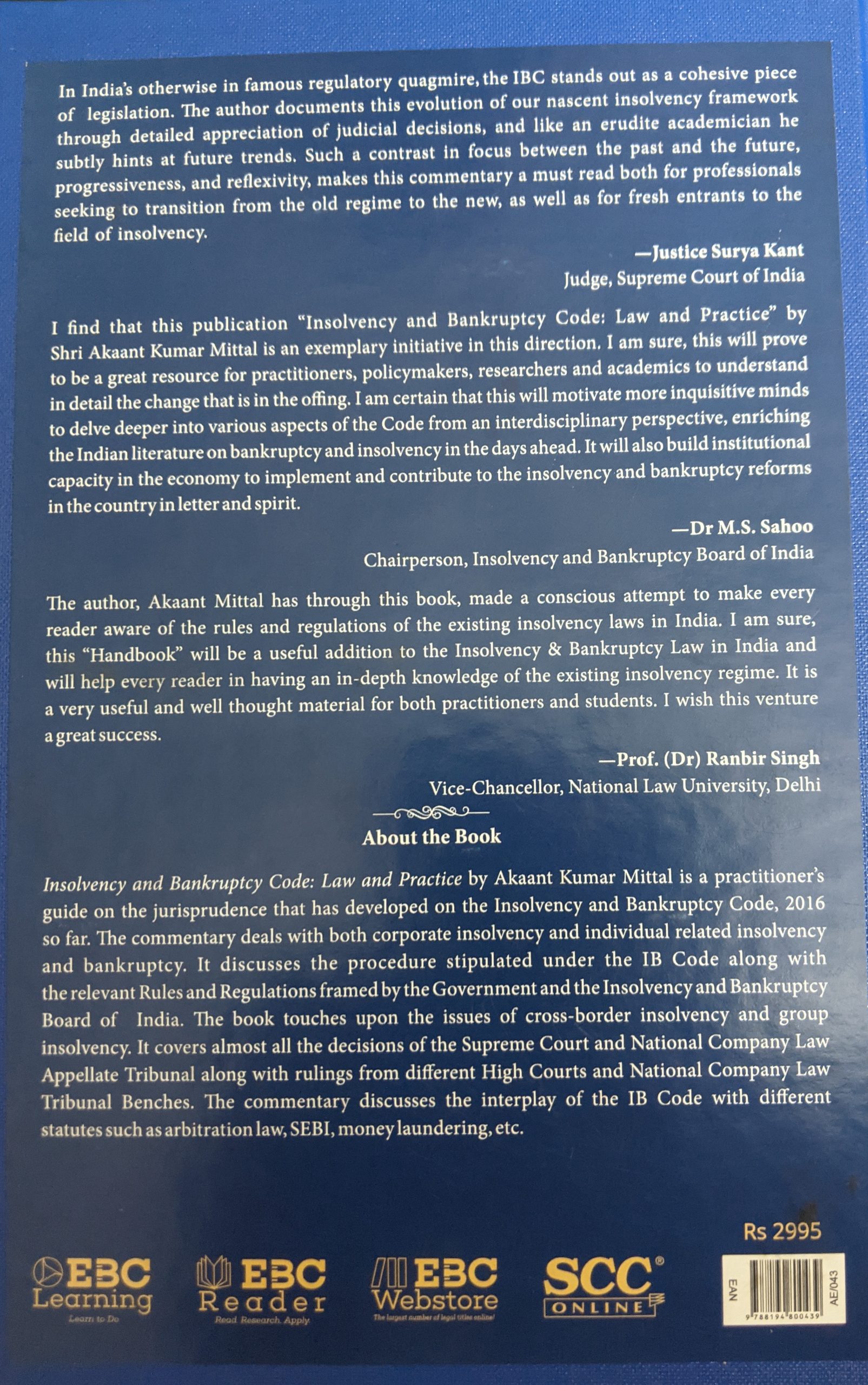 Your commentary contains useful case laws related to IBC. How do you go about reading, analysing, and summarizing a case?

This particular process is excruciatingly painstaking, especially when law is of the nature of IB Code which is extremely wide on account of its constant intersections/interplay/conflict with other statutory laws as well as the brisk pace at which it keeps altering.

While writing the commentary, there were occasions that my mind would get scrambled only because of the width of the law and the amount of judicial rulings. There was no reference book on how the judiciary has given a treatment to this subject of law. Therefore, it all had to be done from the scratch.

There have been commentaries on this law, but the one based primarily of Indian Courts’ judgments was the need of the times. Giving the commentary a structure with readily and easily perusable headings and sub-heads was the core ideas. The commentary is intended to assist the practitioners in this area of law as well as researchers of law.

Being a practicing lawyer appearing for the Courts whose very judgments I was analysing, and critically evaluating was a nerve wreaking endeavour since it is difficult to separate the professional side from the scholarly side of one’s life.

I am happy that with the blessings of higher forces the task was dutifully concluded and I was able to write a commentary which was a blend of the research as well as the practical experiences gained over the course of 4 years of the operation of the law.

When one receives review from lawyers, company secretaries, chartered accountants, officers who are finding this commentary useful for their easy references on a given point of law; I have nothing more to say, but to be grateful to what I have been bestowed with.

The buy the book, please visit the Amazon link here, or the EBC page here.