Recently, a series of tweets and Instagram stories made headlines as they alleged instances of sexual abuse in Chennai’s well-known school. These allegations raised several crucial questions, including how schools serve as breeding grounds for child sexual harassment and how teachers are often complicit as abusers by making sexual advances at students. Detailing the instances that followed an uproar on social media, Surabhi KC explains the sequence of events adding to the larger narrative of child sexual abuse in schools. 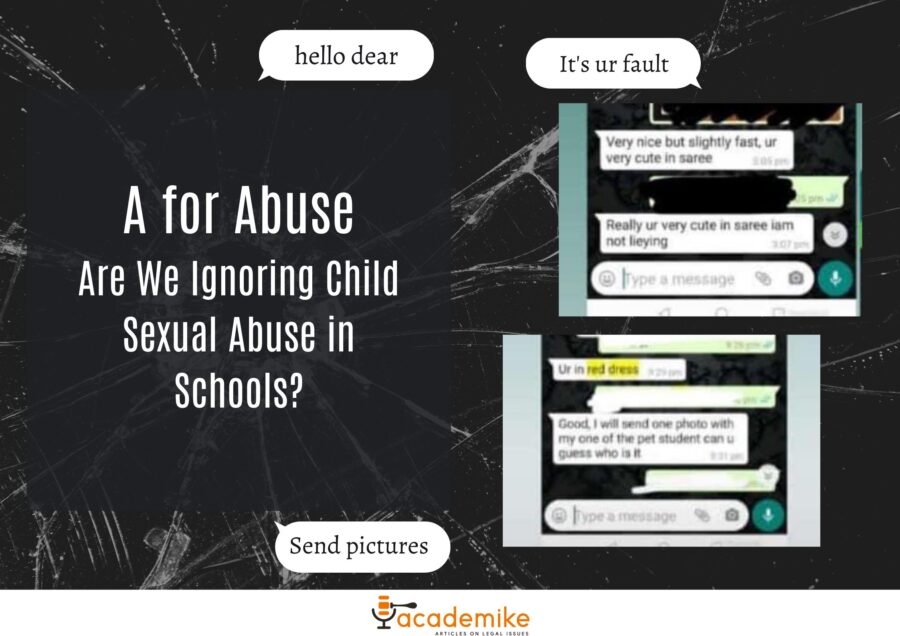 By Surabhi KC, a first-year BSc LLB student at Gujarat National Law University. Surabhi is a member of the Lawctopus Writers Club and trades memes for a living.

At the end of May, several famous figures like Randeep Hooda, Neville Shah and others got called out for former casteist and misogynistic jokes and behaviour. As the issue gained momentum, alumni from the Padma Seshadri Bala Bhavan(PSBB) group of schools in Chennai spoke about the rampant casteism in schools.

With allegations of casteism, a barrage of other complaints concerning sexual abuse and harassment followed against PSBB schools.

Kripali Samadariya, a model and an alumnus of PSBB, amplified the same on her social media. And others like Chinmayi Sripaada(a playback singer) soon followed suit, which uncovered the continuing abuse at major Chennai institutions. These allegations got linked to the online #Metoo movement and ushered conversations around sexual abuse in schools.

One of the first persons accused of harassment was G Rajagopalan, a 59-year-old male who taught Business Studies and Accountancy to grades 11 and 12 at the PSBB KK Nagar branch.

What Were The Allegations?

Many alleged that casual sexism and rape jokes were common in Rajagopalan’s classroom. If a student reacted to any violation of personal space, Rajagopalan would brush it off, gaslighting such objections as ‘overthinking’. Sometimes he would ‘elbow their breasts and say that it happened by mistake’ and ask questions fraught with sexual innuendos.

While several students complained against the 59-year-old teacher to the school authorities about continuous harassment, their requests went unanswered. The school, on the other hand, in a statement, claimed the management was unaware of anything foul.

After much public outrage, the school suspended the teacher with immediate effect on May 24 evening. All-women Police of Ashok Nagar brought in Rajagopalan for an enquiry and asked people to come forward with formal complaints against him. Following this, five complaints were lodged against Rajagopalan. Subsequently, he was taken into judicial custody.

What The Law Says

The Police booked him under Section 11 and 12 of the Protection of Children from Sexual Offences(POCSO) Act 2012, Sections 354(A) (Sexual harassment) and 509 (Insulting modesty of a woman) of the Indian Penal Code. Apart from this, he was also booked under Sections 67 (Punishment for publishing or transmitting obscene material in electronic form) and Section 67A (Punishment for publishing or transmitting material containing the sexually explicit act, etc., in electronic form) of the Information Technology Act.

POCSO came into force on November 14, 2012, to protect ‘children from offences of sexual assault, sexual harassment and pornography’. Section 11 of the Act deals with sexual harassment of children, and Section 12 lays down a maximum term of 3 years and a fine for crimes under section 11.

Section 354A of the Indian Penal Code(IPC), which was inserted into the IPC through the Criminal Law(Amendment)Bill, 2013, deals with sexual harassment of women by men, along with unwelcome physical contact with sexual overtures, sexually coloured remarks and more. Depending on what sub-clause the act falls under, punishment can extend to three years or fine or both. Section 509 of the IPC deals with acts, words or gestures intended to insult the modesty of a woman and outlines a maximum simple punishment of a year, or fines or both.

On June 5, a special POCSO court refused to grant him bail as the inquiry into the allegations was incomplete and still at a preliminary stage.

Also, the Greater Chennai Police detained him under the Goondas Act (The Tamil Nadu Prevention of Dangerous Activities of Bootleggers, Drug Offenders, Goondas, Immoral Traffic Offenders, Forest Offenders, Sand Offenders, Slum-Grabbers and Video Pirates Act, 1982). The Goondas Act was amended in 2019, extending its ambit to sexual offences and cybercrimes. Under the act, perpetrators can be detained for up to a year without a trial.

G Rajagopalan is not ‘one bad apple’. He is the symptom of a profoundly patriarchal and abusive system that enables such behaviour.

In the week after the allegations surfaced, Police appealed to the masses to report any other such incidents. As a result, the special wing received 78 complaints from ‘either alumni or students at various schools’. In addition, ‘over 25 complaints’ were ‘about city schools or other institutions’. Following these complaints, several got arrested under different sections of  POCSO, the IPC, and the Tamil Nadu Prohibition of Harassment of Woman Act.

Among those arrested were:

Following this, the Tamil Nadu government announced new guidelines for schools regarding online classes. From Student Safeguarding Advisory Committees(SSAC) and dress codes for students and teachers to Central Complaint Centres(CCC), the government intends to curb child sexual abuse in schools.

A 2007 study on child sexual abuse found that teachers had sexually assaulted 3.7% of young adult participants of the survey, which shows that such abusers are professional perpetrators. These stats also indicate that child sexual abuse in school is perhaps way more common and might go unreported due to schools pressure.

Environments such as faith communities, schools and childcare services attract abusers who use their work and the secretive environment therein to their advantage to abuse children. In addition, most schools have an atmosphere of slut-shaming, victim-blaming and misogyny. Hence, they easily serve as a breeding ground for child sexual abuse.

When a sexual abuse complaint was filed against S Annadurai of DBTR school, he was detained by the Police and questioned after a case under POCSO was registered.

Shockingly he wasn’t arrested at the time because 30 students, alumni and teachers of the school gathered at Mayiladuthurai All Women’s Police Station claiming that he was innocent. Eventually, it took two more alumni filing complaints regarding similar instances for him to be arrested.

This is a classic example of how our society does not believe in its survivors but enables rapists and abusers.

It is especially damaging when school authorities dismiss inappropriate behaviour as ‘misunderstanding’ and an ‘overreaction’. It’s even more disparaging for the survivors if they are met with responses like, ‘What do you want us to do?’ Students and alumni experienced the same from Chettinad Vidyashram.

Kendriya Vidyalaya CLRI, Chennai, insisted that the 22 complainants must appear for a physical hearing even in the middle of a lockdown, which could further discourage victims from coming forth.

As observed by a special court in Mumbai, schools rarely report instances of sexual abuse in fear of the stigma and what it might do to their reputation. Schools must realise that no name or fame is as vital as the safety of children.

The 2007 study on child abuse found that 53.2% of the total child respondents had experienced some form of sexual abuse. Thus, we cannot ignore that child sexual abuse is a deeply entrenched issue in Indian society.

The state owes its children the opportunity to have a dignified childhood, free from exploitation and moral abandonment under article 39(f) of the Constitution of India.

It is disturbing to see schools sheltering abusers and making children feel unsafe.

As cases of teachers abusing their position surface, we must remember the words of CJ Narasimham:

“He was her School teacher and he took advantage of his position by inducing her to come inside the School room and committed such an atrocious act, the consequence of which might as well be the complete ruin of the future life of the girl.”

1 thought on “A for Abuse: Are We Ignoring Child Sexual Abuse in Schools?- Academike Explainer”