Do prisoners in India have right to healthcare? At the onset of May, the Supreme Court ordered the release of prisoners due to the second wave of COVID-19. Only last year the court had ordered states to establish a High Powered Committee to ensure decongestion of prisons. But with a slump in cases, many high courts across India ordered prisoners to surrender and return.

Despite the surge in cases, the infirm conditions of Indian prisons such as overcrowding and poor medical facilities continue to be a norm. Can the latest order by the Apex Court bring about any substantial change in prisons? 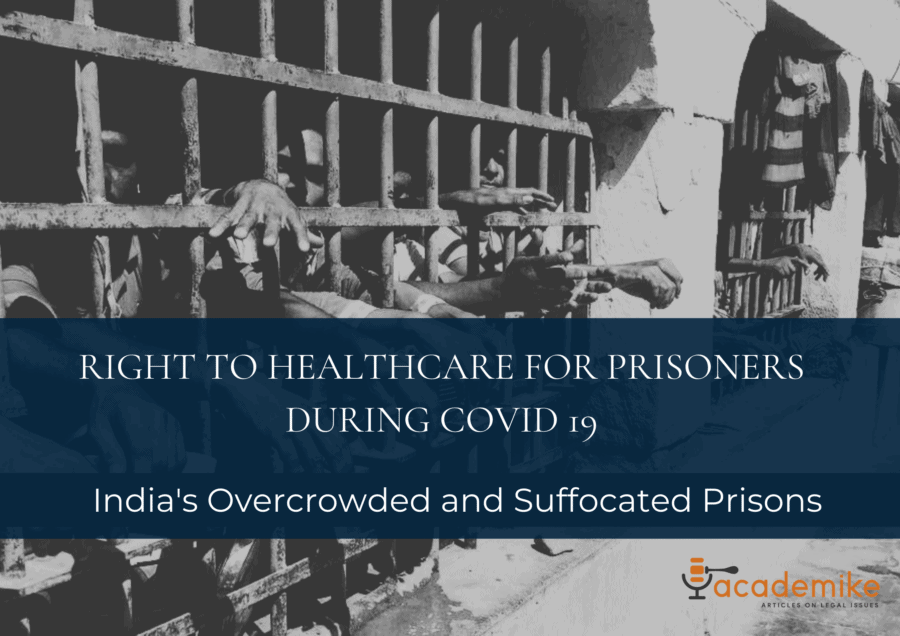 No one truly knows a nation until one has been inside its jails. A Nation should not be judged by how it treats its highest citizens but its lowest ones.

Worldwide, an estimate of over 11 million people are serving a sentence or awaiting trials. As the COVID-19 pandemic raged globally, the prisons and prisoners were neglected. Given the overcrowding of inmates in India and across the world, the most affected of all prisoners are people from vulnerable social and economic sections.

This article will look at the international perspective and conventions regarding COVID related prison reforms. It will outline the hardships faced by prisoners during the COVID-19 pandemic, taking into account the domestic scenario and case laws with the recent contribution made by Supreme Court.

It highlights the measures that the government authorities could take to protect prisoners. The article gives weightage to adequate and proper healthcare to prisoners as they too have a fundamental right to healthcare enshrined under Article 21 of the Constitution of India.

Rights of Prisoners Under International Law

On the one hand, we are witnessing widespread community transmission of covid 19, while on the other, there are legitimate concerns over transmission within prisons. The outbreak of any infectious disease poses a higher rate of threat in prisons. Due to the vulnerability and spatial restrictions, inmates find it challenging to distance themselves physically. Moreover, the poor ventilation and condition of prisons only add to the menace.

Access to healthcare for prisoners is internationally recognised as a fundamental right by United Nations. In 2015, the United Nations General Assembly unanimously adopted the Standard Minimum Rules for the Treatment of Prisoners. It was later renamed as ‘Nelson Mandela’ rules to honour the legacy of the late South African President, who spent 27 years in prison for opposing apartheid.

The Mandela Rules outlines the Minimum Standards that should apply in prisons to safeguard the dignity of prisoners. The main aim of these rules is to provide humane conditions of imprisonment.

The first most fundamental principle of the Nelson Mandela Rules under the ‘Rules of General Application’ stresses that prisoners must not be degraded or treated inhumanely. It furthers,

“All prisoners shall be treated with respect due to their inherent dignity and value as human beings… The safety and security of prisoners, staff, service providers and visitors shall be ensured at all times.”

The joint statement drew urgent attention from world political leaders. As it highlighted the vulnerability of prisoners due to the COVID-19 pandemic. [iv]

The United Nations Human Rights Council categorically remarked on States’ failure in taking positive measures to combat the spread of COVID-19 in prisons. The UN also iterated that the same amounted to a violation of Article 6 (right to life) and Article 9 (right to liberty) of the International Covenant on Civil and Political Rights (ICCPR) 1996.

As India is a signatory to ICCPR, the Indian Government must take adequate steps in preventing the spread of covid 19 in prisons. In case of failure, it will lead to violation of the obligation as mentioned earlier under ICCPR.

In March, the 14th UN Congress on crime prevention and control discussed the impact of the coronavirus in prisons. The UNODC acknowledged:

“Sufficient space, nutrition and drinking water, access to sanitary items and decent sanitary facilities as well as proper ventilation in accommodation and working areas, are not a given in many prisons around the world.”

The prison reform expert at UNODC expressed concern regarding prisons’ situation across the globe. The condition has become worrisome due to uncertainty and fear among prisoners and prison officials. The UNODC  recommended that all countries should make arrangements for the basic needs of prisoners during the pandemic.

The pandemic has vastly impacted women inmates as they are most affected due to the lack of sanitation and hygiene. Especially since they’d require medical facilities for reproduction, menstrual, pregnancy, etc., in this case, states should take extra precautions and decongest the jails.

The international regime has played a drastic role in guiding the countries to take measures in preventing infection. Still, the system has its own drawbacks. The prison system needs a massive overhaul despite the current precautions, or else it would expose inmates to severe harms.

In India, the Prisoners Act, 1894. Section 3(1) defines ‘Prisons’ as any jail or place used permanently or temporarily under a state government’s general or special orders to detain prisoners. The act includes ‘criminal prisoner’, ‘convicted criminal prisoner’ and ‘civil prisoner’.

Section 13 of the Prisoners Act, 1894 defines the duties of medical officers in prison. Under this section, the medical officers have an obligation to look after sanitation and hygiene. This was also pointed out by the All India Committee on Jail Reforms 1980-83. Despite this, Indian prisons continue to be unhygienic and medically unsafe.

In 2020, when Dr Kafeel Khan was in Mathura jail, he described prisons as a ‘living hell’ in his letter from prison. He also mentioned that there was just one attached toilet for more than 120 inmates.

According to the National Crime Records Bureau (NCRB), Prison Statistics India 2019, there are 1,350 prisons in India. The actual capacity of prisons is 4,03,739 and the number of prisoners at the end of the year were 4,78,600, which directly indicates that prisons in India are overcrowded. One of the significant causes of overcrowding in prisons is because two-third of the inmates are undertrials.

In Charles Sobraj v. The Suptd., Central Jail Tihar, the Court held that imprisonment does not spell farewell to fundamental rights. Furthermore, in Parmanand Katara v. Union of India and others, the Supreme Court made it very clear that there can never be a second opinion regarding the preservation of human life. And it does not matter whether the patient is an innocent person a criminal.

Ideally, prisoners in India must retain all the rights except those lost necessarily as an incident of confinement, such as the right to movement and profession.

In 2020, when the World Health Organisation (WHO) declared Covid-19 as a Pandemic, the Supreme Court took suo motu cognisance regarding the spread of the COVID-19 in prisons. On March 23, 2020, in the Contagion of Covid 19 Virus in Prisons order, the bench headed by former Chief Justice of India S.A. Bobde noted that the Prisons in India are overcrowded. Therefore, have a high risk of transmission of coronavirus. The Court iterated:

“Having regards to the provision of Article 21 of the Constitution of India, it has become imperative to ensure that the spread of the Coronavirus within prisons is controlled.”

Additionally, the Court asked state governments and Union Territories (UTs) to take immediate measures to provide medical assistance to prisoners.[xv] It also directed all states and UTs to form ‘high-powered committees’ to determine the ‘class of prisoners’ to be released on parole or interim bail.

Although, a few inmates were released from the prisons owing to the pandemic. But the same lasted only a little while. As cases dropped, there was a push from prison authorities and the courts to return to confinement. Towards the end of 2020, Chief Justice Delhi High Court DN Patel directed that inmates must  ‘surrender or go back to jail’.

However, cases rose again in 2021, especially in March, when India saw an unprecedented spike with the ‘second wave’ of COVID-19. Amidst the surge, the People’s Union for Democratic Rights (PUDR) wrote to Chief Justice Delhi High Court DN Patel. The open letter mentioned the worsening condition of inmates with 67 active cases of COVID in Delhi and the state of vulnerable prisoners such as women, children, and those above 50 years.

On May 7 2021, the Apex Court referred to its previous order dated May 23, 2020, and directed that High Powered Committees assess the situation and recommend release. According to the 2021 order, about 90 per cent of the inmates had returned to the prisons by March 2021.

Learned Senior Counsel Mr Colin Gonsalves had pleaded that all prisoners released last year must be released on regular bails. He prayed that the court must grant additional 90-day parole to prisoners who had been on parole in the previous year.

Mr Gonsalves also demanded that orders decided by the High-Powered Committees should be available on the Government website to ensure transparency. The court took notice of the same and directed administrative transparency, among all other demands.

While this could be called a start, there were no specific guidelines issued for the release of inmates. And no definite information regarding how many inmates are infected with Covid-19 is available on the official website.

In the light of these discrepancies, there are few questions we must ask:

whether RTPCR tests were done before releasing the inmates? Are inmates following the quarantine rules? Are any efforts made to vaccinate the inmates? And if they are released, will they be provided with rations and other necessities?

A Pilot Survey was conducted for Indian medical students to check their understanding of prisoners’ health rights. The findings revealed that 91.8 per cent of the students had received less than one hour of education on prisoners’ health.

This information only affirms that the government and medical institutions must design dedicated training that is aware of prisoners and the prison environment.

National Human Rights Commission, on October 5 2020, issued an advisory on Human Rights of Prisoners and Police Personnel during COVID-19.  The first advisory said that the fundamental rights of prisoners could not be violated. The recommendations included:

“Ensuring essential healthcare facilities in every prison; creating collaborations and protocols with local and specialists hospitals to provide appropriate testing to inmates; sufficient stocks for medicines; appropriate isolation and distancing measures to be enforced to the extent possible; and inmates should be provided with soap, sanitisers and facemasks and also allow inmates to access to medical records.”

Until recommendations such as these are implemented in the true spirit, we won’t truly eradicate the spread of COVID-19.

There is no denying that the Supreme Court’s order to State governments and Union Territories was a great step. But whether the orders are being implemented must be scrutinised.

According to Commonwealth Human Rights Initiative (CHRI), approximately 1,400 inmates are infected with the virus, and 61,000 inmates have already been released. This goes to show that measures taken till now have been highly inadequate. It’s high time that the administration and judiciary work actively towards effectuating prison reforms.

Overcrowding in prisons is not an anomaly. Therefore, we must not wait for extremities like COVID to improve living conditions for prisoners.