Since its inclusion, first, under rule 49-o of  Conduct of Elections Rules 1961, and again as a symbolic implementation in 2013, NOTA was idealised as a powerful tool to exercise the right to reject. Overestimating its potential, the Supreme Court in its NOTA judgment became too short-sighted. While the top Court included NOTA as a working option, it simultaneously made NOTA vote incompetent. Disha Pathak details the inefficacy of NOTA and its limited potential to bring any real transformation. 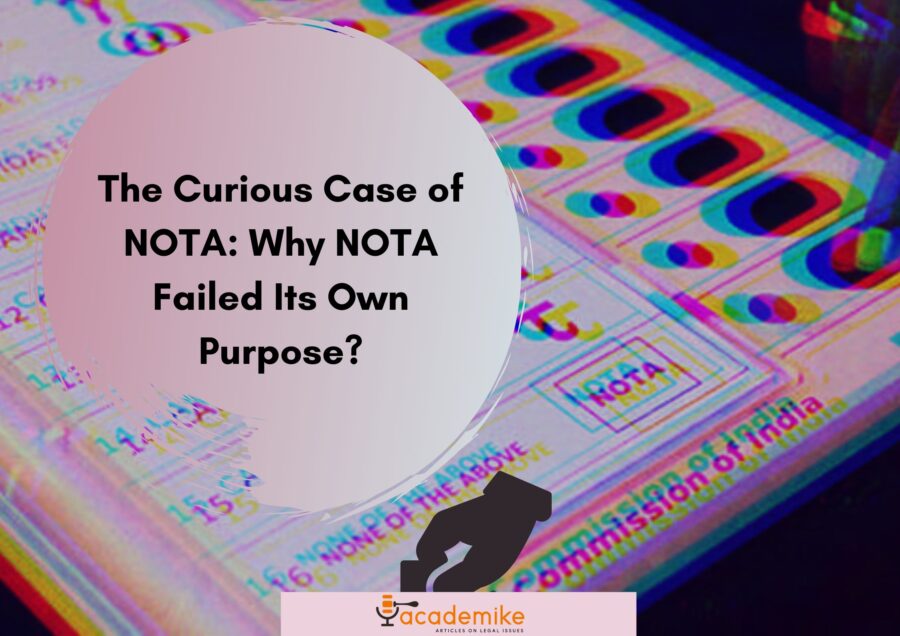 By Disha Pathak, a third-year student of University Institute Of Legal Studies, Panjab University, Chandigarh, and member of the Lawctopus Writers Club.

However chaotic, elections in India have managed to retain some sense of democracy. From panchayat polls to Lok Sabha elections, all equally complex, driven by enthusiasm, rhetoric and dynamic display of power and discrimination. Elections serve as the primary diet for TV news channels as they are overloaded with loud prime-time debates, crowded election rallies and imagined promises.

No matter the faultlines, elections are imperative, and so is voting. For once, the governed are allowed to practice their right to vote and choose. But what if you choose to reject?

NOTA or ‘None of the Above’ is supposed to validate public disapproval of the government or candidates. Rejection is an option only as far as it makes no real difference and is as ineffective as prepoll campaign promises. Why is it so? Where has NOTA failed?

This article tries to shed light on the NOTA provisions and their prospects in Indian elections and outcomes. The article will first talk about how NOTA got its spot on Electronic Voting Machine (EVM). Then it will proceed with some recent figures, which will show the fall in NOTA votes. Further, discussing the issues with NOTA’s efficacy, describing how the same has been criticised over the past few years.

How NOTA Made Its Way Into The Indian Electoral System?

In 2009, the Election Commission of India, as opposed to the idea of the then government, had asked the Supreme Court for the NOTA provision. It was only in September 2013 that in response to the Public Interest Litigation (PIL) filed by the People’s Union for Civil Liberties (PUCL), NOTA came into being.

In People’s Union for Civil Liberties v. Union of India, 2014, the Court focused on protecting the elector’s ‘secrecy of the vote’ when the voter exercised the right to reject (or not vote). It meant strengthening democracy, further strengthening the basic structure of the Constitution.

However, there was no legal consequence of the NOTA judgement as it was envisaged by PP Malhotra, the then Additional Solicitor General of India.

The Supreme Court held in the above case (Para 53):

“For democracy to survive, it is essential that the best available men should be chosen as people’s representatives for proper governance of the country. This can be best achieved through high moral and ethical values, who win elections on a positive vote. Thus, in a vibrant democracy, the voter must be given an opportunity to choose none of the above (NOTA) button, which will indeed compel the political parties to nominate a sound candidate. This situation palpably tells us the dire need of negative voting.”

Though the Supreme Court in all its glory recognised the ‘need for negative voting’, the judgment is obscure. Antithetical to the idea of ‘rejection’, the Court also implied that NOTA would be counted as a vote, adding to the winning total.

Thus, while Supreme Court judgment promised a ‘thriving democracy’, the Court only succeeded in providing an additional button on the EVM.

Why Should NOTA Matter In Indian Democracy?

The judgment was celebrated for valuing the privacy of a voter and providing the right to reject. But it raised a significant issue wherein, even if the majority chose NOTA, the second-best political candidate wins.

NOTA complimented democracy in India by giving a false sense of hope to the voters and the Court, as the latter anticipated a large voter turnout with NOTA’s addition.

NOTA vote is an invalid vote. NOTA intended to strengthen the voter and democracy, giving the voters a medium to dissent, reject and exercise their freedom of expression. Although NOTA may be successful in voicing public angst, it doesn’t translate into action. The issue here is that there’s no way to channel this angst even if NOTA is the majority’s choice.

In the 2017 elections, Former Chief Election Commissioner of India SY Qurashi had tweeted on similar lines:

“NOTA is like a blank vote. It makes no impact on result. If 99 persons vote for NOTA and 1 for Prashant, for EC the winner is Prashant!”

While the Supreme Court imagined the addition of NOTA to the EVM as a progressive political reform, NOTA has done very little to overcome political or electoral stagnancy. Let alone compelling parties to choose ‘sound candidates’.

NOTA has abandoned voters to succumb to the second-best option. It is not easy to ascertain if the next best option is suitable enough to represent the people’s voice.

Do We Need NOTA in Its Present Shape of Incompetence?

Although there was some sense of enthusiasm for NOTA in the beginning, the same eventually died down.

According to Election Commission stats in the graph, 2013 saw the highest percentage of NOTA votes, which was the first time the option got introduced. These trends could also be because of heavy anti-incumbency against the Indian Nation Congress at the time. Whatsoever the reason, in the following years, stats show a swift decline in NOTA votes.

For instance, the lowest voting trend was recorded in the NCT of Delhi in 2015 (0.40%) compared to the 2013 trends, which recorded 0.63 per cent NOTA votes. This decline is perhaps telling of the voters’ confidence and clarity at the time.

But recent trends show that voters have been rejecting NOTA. For instance, in the 2020 Bihar Elections, NOTA was counted for only 1.7 per cent of the total votes, compared to the decent 2.48% of the total votes in 2015, marking about a 74 per cent dip. The plunge in NOTA could be credited to its inefficacy in the past.

Although according to V.R. Vachana and Maya Roy, despite the decline, the trend for NOTA or negative voting is still somewhat prevalent in reserved constituencies.

This year, Assam and Puducherry recorded about 1.14 and 1.29 per cent NOTA votes in the recent states assembly elections. Despite the fall in the number of NOTA votes, it is interesting to note that in West Bengal and Puducherry, the margin of victory was less than NOTA votes. Perhaps, owing to anti-incumbency in the polling states, voters resisted voting for either of the candidates.

This rejection becomes weak in the face of falling NOTA votes and its inefficacy. Both these factors encourage parties to remain incompetent in bringing any fundamental change when selecting candidates.

For instance, according to the Association for Democratic Reforms (ADR) report, in West Bengal, the percentage of candidates with grave criminal charges increased from 32 per cent in 2016 to 39 per cent in 2021. In this case, NOTA has failed to bring any qualitative change, undoing its only purpose.

It’s relatively straightforward that NOTA does not cure voter dissatisfaction with the elected candidates and may encourage candidates with active criminal backgrounds to contest again.

The Road Ahead for NOTA

NOTA should be beyond a symbolic representation of expression and democracy. If the public knows that their votes would significantly improve the political structure and the subsequent government, it can result in maximum participation.

In 2016, a Public Interest Litigation (PIL) was filed in Madras High Court, stressing the legal status of NOTA and the consequences if it ever gets in the majority.

“In my opinion, NOTA is very good; we should say if NOTA crosses a certain percentage of votes; for example, if the difference between the winner and the loser is less than the NOTA votes, you can say we should have the second round of elections.”

In 2020, again, a plea was filed before the Bench of former Chief Justice of India S.A. Bobde. Ashwini Kumar Upadhyay, a BJP leader, claimed that merely including the NOTA button as a part of the ballot did not enforce the right to reject.

The plea differentiated the right to reject and the provisions of NOTA, claiming that this right is not fully implemented.  Once again, opening the debate on democracy and voters’ participation in elections.

“Democracy is all about choice, and voting constitutes its very essence, but non-participation in election causes frustration and disinterest. Therefore, electors must have the option of rejecting the contesting candidates and elect a new candidate. The right to reject and elect new candidates will empower the people and accelerate their participation since they could abstain and register their discontent with low-quality candidates without fear of reprisal.”

Following this plea, the Court had sent a notice to the centre and Election Commission for seeking an answer. Senior Advocate Rajeev Dhavan said that re-elections might be misused by the political parties to manipulate the results of the elections. Although plea filed in November 2020 claimed that the ineffectiveness of NOTA has more dire implications on the public than re-elections.

While the same is up for contestation, the bigger picture is safeguarding the democracy and spirit of the Indian Constitution. There can only be one interpretation of NOTA that reflects the will of the people. This interpretation should allow voters to choose the candidate of their choice. Also, if voters like, they should be able to reject them based on the candidates’ credentials or past work.

NOTA can prove to be a lot more beneficial than it is today. No doubt, a  learned elected candidate would represent their constituencies more effectively and efficiently. Therefore, there’s no point in having something that only offers the right to reject but continues to be toothless in implementing it.