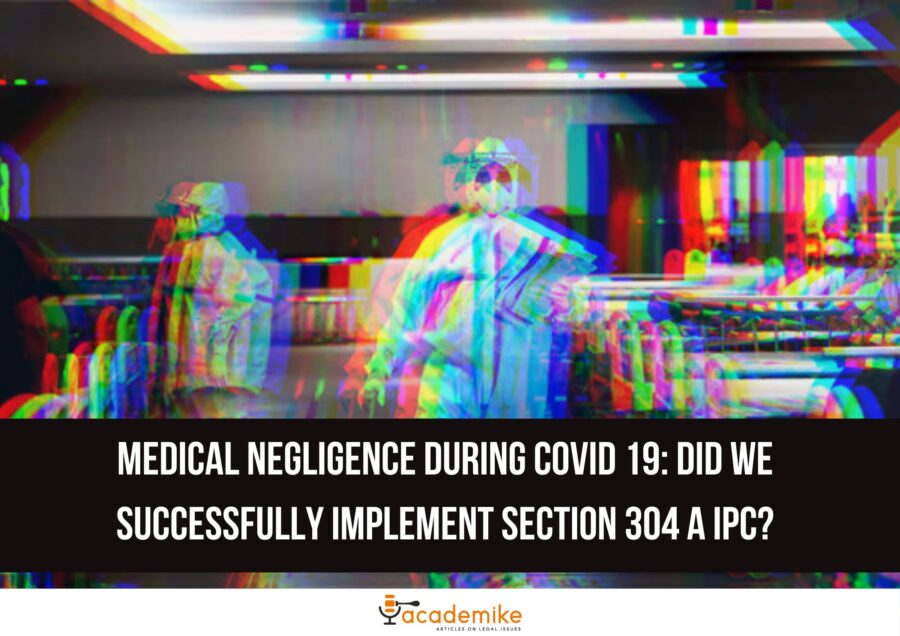 The sudden rise of covid 19 cases alerted nations against a global health emergency. As a result, every country made efforts to stop the increase of infection, including bringing awareness and using technology to ramp up medical facilities.

Despite these preparations, no one can deny that the medical system exposed its vulnerabilities, pushing many into the cobweb of illegal medical practices, which cost heavily on patients.

The following article focuses on medical negligence in the medical field and the implementation of 304(A) IPC during a pandemic like covid 19. Further, it will bring to light the malpractices that raise a concern on the commercialisation at the hands of healthcare providers.

What is Medical Negligence? How is it Related to the pandemic?

Anyone working in medicine knows that even a slight misjudgment could lead to hazards and risks, eventually costing someone’s life.

A surgeon or anaesthetist will be judged by the standard of an average practitioner of class to which he belongs or holds himself out to belong. In the case of specialists, a higher degree of skill is needed.

Professionals such as lawyers, doctors, architects fall within the ambit of the law of negligence, as they all own special skills.

Any task which is required to be performed with a special skill would generally be admitted or undertaken to be performed only if the person possesses the skill necessary for performing the task. (Law of Torts #)

Under the view of the Hon’ble court, referring to the decision of Bolam v. Friern Hospital Management Committee,  Judge Mc Nair expressed

“Where you get a situation which involves the use of some special skill or competence, then the test as to whether there has been negligence or not is not the test of the man on the top of a Clapham omnibus, because he has not got this special skill. The test is the standard of the ordinary skilled man exercising and professing to have that special skill”.

The statement gives us an idea that medical negligence can occur at a stage where the professional is either not at par with the knowledge of the patient’s health or does the act knowingly.

Negligence in legal terms means and barred breach of a duty of care that results in damage. The following three ways make the constituents for negligence :

The job of a doctor is to ensure that his patients are treated properly and with utmost care. Further, it has been cited in many cases like Jacob Mathew v. State of Punjab that a practitioner can be judged for negligence only if he does not possess the required skill to complete the job or does not exercise caution while treating the patient.

It must be noted that a profession is different from an occupation. While the first requires a degree for a job, the latter may not be mandated upon such conditions.

Doctors do not enjoy any immunity from torts or contracts because the medical profession requires a degree under which the doctor is liable to his client a duty in torts and contract that he exercises reasonable care in giving advice performing services. (Law of Torts #)

Medical Negligence During Covid 19 and Section 304 (A) IPC

India has one of the poorest medical infrastructures around the globe. (Indiaspend)

Even with very few covid 19 cases in certain states, hospitals experienced a shortage of beds, wards and oxygen cylinders.  As numbers rose, it became difficult to access medical aid, especially in smaller cities. The same was also due to a scant doctor to patient ratio in hospitals, which also aggravated due to insufficient medical health professionals. While many doctors risked their lives during this time, a few doctors indulged in forgery and malpractices.

On June 25, 2021, two associates from Kanpur were found guilty of causing the death of a patient by negligence. The police lodged FIR and barred the two under the provision of 304(A) (causing death by negligence which does not amount to culpable homicide).

A probe was ordered as the doctor and his associate ransacked the accused and extracted nineteen lakh. Further, as the bill was overpriced, the deceased’s son went on to ask the doctor for the same. However, the doctor and his staff denied any such accusations and threatened dire consequences. This upset the family and they reported the matter. Finally, the police filed the FIR under  304A IPC,506 IPC, 504 IPC and 352 IPC and section 56 of the disaster management act.

Later, It was also observed that the doctor gave the patient a wrong injection, resulting in her death.

Many cases of black marketing of oxygen cylinders were reported when cases spiked again during the second wave. One such incident is from Karnataka, where the man tried selling cylinders at exorbitant prices and the police later arrested him.

With an upsurge in cases, many people were struggling to find beds and wards, and at their expense, private hospitals were charging thrice the amount than usual. Meanwhile, those who failed to comply with such unreasonable prices lost their family.

The government at its end was also not so swift since the lockdown was not pre-announced, and even when it opened up, the cases were on the rise, leading to an increase in deaths.

Even vaccines were being given at a higher price in private hospitals. However, after the government’s interference, the vaccine is now administered free, at least in government facilities.

But even during these challenging times, some businesses have maintained a steady rise in their income by not giving accurate details of their products. For example, Patanjali, a renowned brand, claimed that their ayurvedic ‘Coronil Kit’ was tested by WHO. Believing this narrative, many opted for the same instead of relying on allopathic medicines, which was the actual need.

Although medical professionals and researchers rebuked these claims, it was already too late as many blindly consumed these ‘medicines’. It was much later that Patanjali was also called out for spreading lies during the pandemic.

Due to the under-reporting of covid -19 deaths, the medical fraternity could not provide adequate facilities, and because of this, the hospitals became overcrowded.

Due to such overcrowding, many succumbed to black markets and outrageous demands by medical professionals. However, even after charging exorbitant prices, proper medical treatment was not extended.  Unfortunately, at the time, not many attorneys were willing to provide medical negligence on families’ health and couldn’t raise awareness in society, leading to the deaths of innocent people.

In a non-Covid case, Sishir Rajan Saha v. The state of Tripura, the petitioner’s son, Ashim Saha, while coming from Agartala to Udaipur on a scooter, met with an accident. He was admitted to the emergency ward of the GB Hospital, Agartala. The senior specialist doctor, Dr P.Roy, was not available in the hospital. He repeatedly called to attend to the patient. However, he was busy attending to his private patients and did not bother to come to the hospital to attend to the accident victim. Unfortunately, Ashim Saha succumbed to his injuries. Due to the same, Dr Roy was held liable to pay Rs. 1,25,000 as compensation for the death of the deceased. Directions were also issued to all the government hospitals to upgrade the medical services.

Thus, going by this case, if a specialist doctor does not care to attend to a patient admitted to the hospital’s emergency ward and the patient dies, the doctor would be liable to pay in compensation.

To protect the rights of every individual’s law and order should go through checks and balances at regular intervals. Seeing the plight of doctors and how they still manage to treat patients, some kind of immunity should be provided.

To resolve many disputes monetarily, terms shall be used more than civil liabilities. There is also a contrary view that doctors shall be relaxed from criminal liabilities during the pandemic. Still, the question arises: will it violate the patient’s right to law and order?

It becomes difficult to conclude any decision through the grey areas of medical litigation, but criminal liability can be lowered down to keep everything in balance.