To find the meaning of queer as we know of it today, and locating its beginning is nearly impossible. Like language, the purpose of ‘queer’ and its significance has only evolved. From an idea to identify and finally becoming activism, ‘queer’ is not limited to how one defines themselves. It extends beyond the gender and sexuality paradigm; it presents marginalisation and change. Srinithi Sreepathy traces the beginning of the Stonewall movement, the making of pride and the evolution of the word ‘queer’. She also looks at the significance of the word in the Indian context. 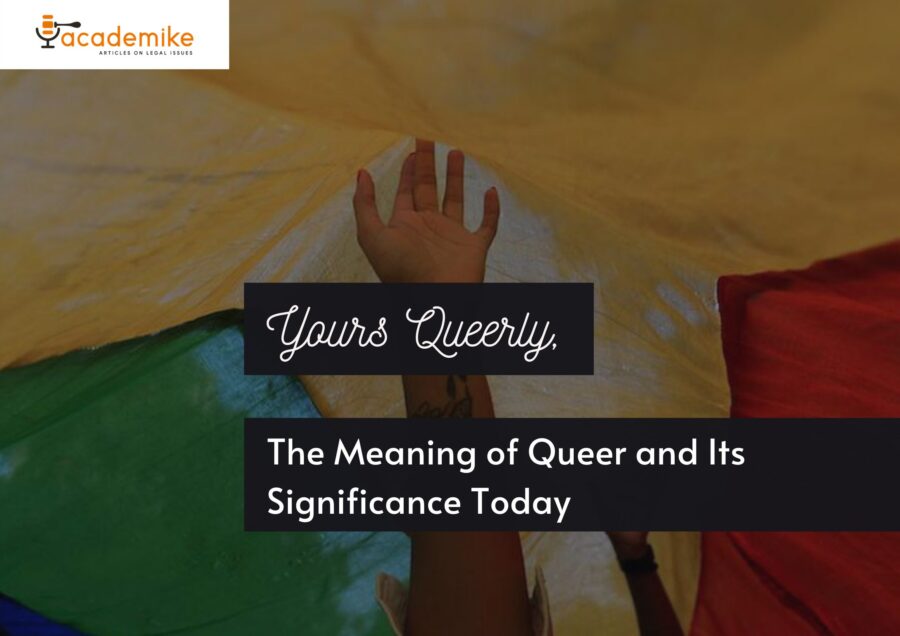 By Srinithi Sreepathy, a fourth-year law student from Symbiosis Law School, Noida. Srinithi is also a member of the Lawctopus Writers Club.

“Don’t you know that these people have no place to go and need a place like that (gay) bar?”

A middle-aged woman berated a police officer as he shoved people out of a gay bar in Greenwich Village, Newyork City.[1]

In 1969, many such gay bars that stood quietly in Greenwich Village lost their charm to violent police attacks. American police carried similar strikes against bars that were famously gay under ludicrous allegations like selling illegal alcohol. Despite being one of the few places left for queer folks, the routine rampage continued for over weeks that year.

By June 24, 1969, police made their way inside Stonewall Inn, arresting employees and customers.

In his account, Dick Leitsch, one of the eyewitnesses, wrote about the rampage and described Stonewall Inn’s significance. The piece that featured in the Atlantic read:

“The club was more than a dance bar, more than just a gay gathering place. It catered largely to a group of people who are not welcome in, or cannot afford, other places of homosexual social gathering.”[2]

Leitsch’s account mattered more so because he was one of the first gay journalists who covered and reported the events of Stonewall.

To everybody’s surprise, Stonewall rose in defiance against police brutality, and rightly so. The subsequent six days went down in history as a revolution that reclaimed identity. Since then, the Stonewall uprising is touted to mark a departure from continuous violence, both mental and physical, against the LGBTQ community. Hence the year 1969 marked the beginning of the end. And today, Stonewall riots have become synonymous with freedom and Pride.

The significance of the month and movement lived beyond the seven days of defiance and is still celebrated as Pride Month. Despite antigay state systems and police brutality, bravery and queerness prevailed, following which, on June 28, 1970, the World witnessed its very first pride march.

Although the anecdotes from the Stonewall movement scream emancipation, the fight for rights and claiming ‘queer’ as a movement goes way back in time. [3]

Before the defining moment of Stonewall, thinkers and theologians all over the Western Hemisphere had been part of liberation groups like the Gay Liberation Front or the Daughters of Bilitis. But even amongst activist groups seeking equality, there were fissures in terms of the outlook.

Both the Gay Liberation Front and the Daughters of Bilitis, for instance, primarily catered to the middle-classed white folk. And they were exclusively for gays and lesbians, respectively.

Although the group defied fixed notions of sexual orientation, it remained limited within its own set of binaries. There was no space for trans people, let alone black trans people. Thus, even within inclusivity, intentional or not, there was exclusion.

“….Gender Rights were not a part of their political agenda. Feminism had focused on winning for women the same rights as men in terms of access to opportunity, pay, and so on, but not the right to masculinity itself. This was not a problem of ‘Separate but Equal’ as much as ‘Different but equal.”‘[5]

Owning the third-gender or reclaiming the ‘transgender’ identity was difficult as it challenged gender stereotypes and demanded reaffirmation. Thus, feminists and others part of the early movement could not challenge the concept of gender itself without being dismissed ab inito.

Thus, while each group sought equality and social change, they could not assist others. Feminists could not aid the cause of lesbians without being subjected to ad hominem attacks.[6]

However, the experience of discrimination and brutal force was similar. Therefore, there was a need for a more collective term that stood distant from the binary and yet challenged it.

The lacunae in terminology created exclusionary space, and hence  ‘queer’ eventually got accepted and evolved into an inclusive term.

The relevance of the word ‘queer’ became popular much later, replacing ‘gay’, which later became limited to same-sex love between men.[7]

Originally, ‘gay’ was used as an umbrella term that masked the entire LGBTQ+ movement. Moreover, legends like Marsha P. Johnson and Sylvia Rivera, among others from the Stonewall generation, used ‘gay’ liberation as an all-encompassing term.

Meaning of Queer: The Word, Movement and Individuals

The earliest usage of the term ‘queer’ has been attributed to sixteenth-century Scotland. However, the Scots used it in a derogatory way, where ‘queer’ meant ‘perverse’.

Slightly polite but equally derogatory meaning of queer was ‘strange’ or ‘peculiar’, derived from an English Slangs dictionary.[8]

Naturally, queer was neither a preferred term of self-identity nor was it used as one. For the same reason, a large percentage of the early LGBT movements conformed to heteronormative language.

People belonging to the LGBT movement, and even feminists for that matter, could not afford to outrage the sentiments of the general conservative public. For the mere act of claiming their identity was offensive enough.

Thus, It ended up becoming a slur. So to call LGBTQ persons ‘queer’ was a way of inflicting violence against them.[9]

A study by Literary Modernist Dr Emma Heaney even suggests that queer was first used to differentiate between masculine gay men from effeminacy.[10]And lesbians were called ‘dyke’ or ‘butch’ if they were too ‘manly’ for heterosexual or cisgender comfort.[11]

But time changed, and terminologies too. Over time, ‘queer’ acquired a more emancipatory connotation.

The recent history and several LGBT activists credit this change to Queer Nation. Queer Nation was an activist group formed in response to the large-scale violence against LGBT people in New York City. The group’s active efforts demystified the heteronormative notions around the word.[12]

Queer Nation and activists associated with the group made consistent efforts to normalise queer identities since the inception of the group in the 1990s. They famously coined:

Although Queer Nation became instrumental in owning a new meaning of queer, it’s important to remember that the evolution of ‘queer’ as an emotion or an identifier cannot get contained in a single locus.

If one were to pin down the meaning of queer, as it was accepted and used from the twentieth century, [14]  it referred to bisexuals, pansexuals, asexuals, etc. ‘Genderqueer’, on the other hand, refers to people who find themselves in the fluid gender spectrum.[15]

“I know how empowering it feels to reclaim words that have been used to harm us, and I appreciate ‘queer’ specifically because it has always carried a sense of undefined abstractness. Even as a slur, the word described those who exist out of what society mandates.”[16]

As the language of rights and democracy progressed, identifying oppression based on gender and sexual orientation became essential. Within themselves, LGBTQIA+ persons also sought allies from other ostracised communities that understood intersectionality. Hence, ‘queer’ became more than just an identifier; it became a cause and a ‘political statement’.

But it’s also important to remember that the term might warrant a nervous response from someone who owns themselves as ‘queer’ despite its reclamation.[17]

Because though ‘queer’ became a symbol of defiance, it also carries the weight of its history. The latter is emblematic of stigmatisation and prejudice. Usage of terms like queer could also come with the baggage of homophobia and violence. When it comes to the utilisation of the word ‘queer’, the rule of thumb is generally just asking if the person is comfortable with the term or not.

The meaning of queer and the extent of its usage has become fluid. While some don it as ‘Pride’, the word itself comprises several subjective experiences and public subjectivities.

India had its Stonewall moment in 2001 when the Uttar Pradesh police raided the premises of the Naz Foundation and the Bharosa Trust.[18] The raid visualised queerness in India that had long been in hiding.[19] Several activists defied the Indian state by owning themselves.

But for all its glitz, the Indian queer movement is yet to gain traction as the discussion regarding queer theory and culture in India still has western inferences.

We are yet to develop our queer theories suited to the Indian context. Queer activism in India cannot achieve its objectives without considering religion and caste bias, and other Indian ways of discrimination.

While there is a sense of queer awakening, we are still struggling with radical institutionalisation, conversion programmes[20], social stigma[21]and no marital[22]and adoption[23]rights.

In India, the discussion regarding the LGBT movement generally tends to begin and end with the decriminalisation of Section 377 of the Indian Penal Code. And although it marked a start, we need reformatory actions that step beyond decriminalisation. So far, the Navtej Singh Johar judgement remains severely underutilised on the ground.

Although much is written and spoken about queer rights and emancipation, India struggles to reclaim its own history and literature. For instance, even in 2021, transwomen are not allowed to stay with other women in Prisons.[24] The archaic notions around sexuality and gender dominate the public sphere. For even during a pandemic, Indian parents concerned themselves with conversion therapies instead of accepting their children as they are.[25]

India has decriminalised LGBTQIA+ persons; it’s time we stop our exclusionary practices and work as allies to create safe spaces for LGBTQIA+ persons. In addition, sex education and teaching about queer movements in schools, enlightening students to queer themes in literature both native to India and foreign, need encouragement.

[1] TheAdvocateMag. (2012, June 29). From Our Archives: The 1969 Advocate Article on the Stonewall Riots. ADVOCATE. https://www.advocate.com/society/activism/2012/06/29/our-archives-1969-advocate-article-stonewall-riots#article-content.

[7] Lovannone, J. J. (2018, June 9). A Brief History of the LGBTQ Initialism. Medium â Get smarter about what matters to you. https://link.medium.com/xPjzM1wTlhb.

[20] Rianna Price PhD Candidate in History. (2021, January 22). LGBTQ+ conversion therapy in India: how it began and why it persists today. The Conversation. https://theconversation.com/lgbtq-conversion-therapy-in-india-how-it-began-and-why-it-persists-today-140316.

[24] Misgendering, Sexual Violence, Harassment: What it Is to Be a Transgender Person in an Indian Prison. The Wire. (n.d.). https://thewire.in/lgbtqia/transgender-prisoners-india.