Bhasha Singh, in her book, writes a telling account of manual scavenging in India, and it stands relevant even today. She details the stories from across India and is writing with deep anguish and pain. Her words are moving, and so are the real-life narratives of manual scavengers. Although her book was published in 2014, a lot still stands true. Singh’s book also exposes the government’s unwillingness and the court’s casteist streak. Dhruv Soni reviews the book,  highlighting the best aspects and drawing some of its limitations. 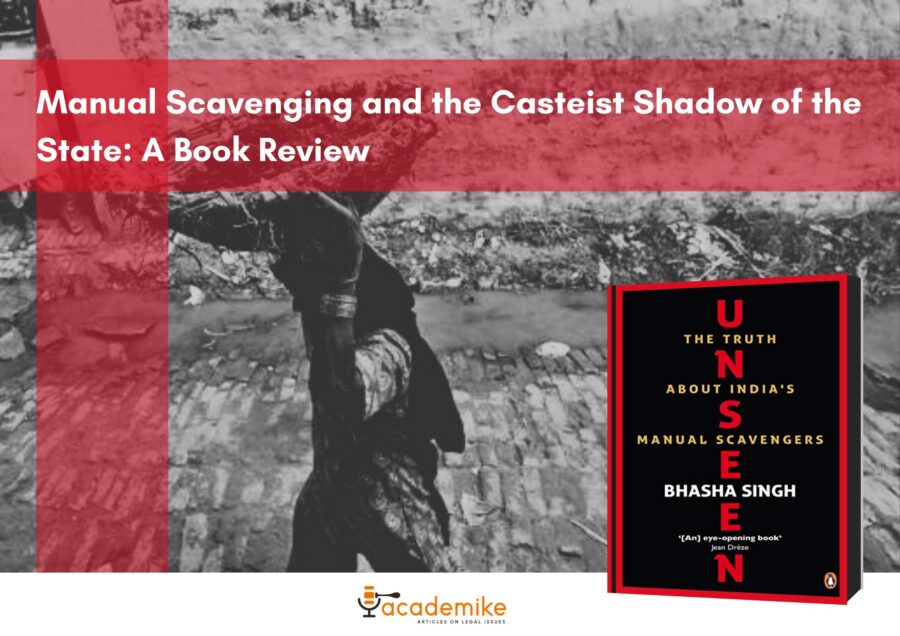 Bhasha Singh’s ‘UNSEEN- The Truth About India’s Manual Scavengers’ is a nuanced account of the author’s journey as a journalist. In the book, she narrates the ostracisation of caste through her reporting on manual scavenging. The book was first published in Hindi as ‘Adrishya Bharat’ and was later translated into English by Reenu Talwar in 2014.

Bhasha Singh has won the Ramnath Goenka Award and backed the Prabha Dutt Fellowship and National Foundation of India Fellowship. The book, through its research and writing, justifies all her accomplishments.

Singh’s account becomes even more authentic because at the heart of the book is the narratives of those subjected to manual scavenging.

Bezwada Wilson, who wrote the ‘foreword’ for this book, describes how the book stands out in its gaze and structure. The book is mature and aware of caste and its tandem with manual scavenging. The book also maintains a feminist narrative that focuses on the marginalisation of people based on caste and profession. In Wilson’s own words:

“Unseen also tells us how this practice (manual scavenging) has shackled the whole community in deep insecurity so that many of us do not even realise that this disgusting work we are subjected to daily—this work of picking up human excrement—is, in fact, a symbol of feudal oppression. This is why the first thing a mother-in-law gifts to a newly-wed bride is a portion.”

Singh addresses the experience and plight of the ostracised and stigmatised victims of untouchability. The book is not restricted to manual scavenging but shifts the focus toward the ‘subject’ of inhumane practice.

“[O]nce I stepped into this world; I did not look back.’

Singh started working on manual scavenging pretty early on in her life, but her journey gained momentum in 2004. She went through different states and cities to understand caste hierarchies and manual scavenging. Though evident, these hierarchies remain invisible under the garb of Hinduism.

According to Singh, some people link the caste system to the Mughals era in India, but this belief is a cover-up. Singh debunks this myth, writing that the caste system was born of Hinduism, and manual scavenging is directly connected to pushing Dalits to the rear ends.

The book runs in two parts. The first part, ‘An Invisible India’, shares the grassroots experiences of manual scavengers in eleven states. It discusses how manual scavenging violates their human rights but persists with the logic of a barbaric casteist feudal system.

The second part, ‘Knocking on The Doors of Power’, explains their struggle for justice before such a system. The second part also addresses fallacies of government and courts.

This article intends to review both of these parts. The review will address Singh’s writing style while describing aspects of the book that stand out in each of these parts.

Singh starts ‘An invisible India’ by platforming the voices of those pushed into manual scavenging. These stories are compelling and tell the reality of caste-based human rights violation. Singh brings these stories from eleven Indian States. All of them are backed by empirical research and marginalised voices. From Kashmir to Karnataka, these narratives reveal how deep the Indian state is affected by caste.

Starting from Kashmir, Singh writes about the local and civic issues which hardly ever make it to the mainstream.

In Kashmir, manual scavenging is called tachh paajin. She writes about the health-related challenges and peculiar situation native to manual scavenging in Kashmir. According to Singh, in Kashmir, the forms of discrimination are vivid. Singh shows how ostracisation plays out in spaces apart from dry latrines, sewers, and septic tanks through anecdotes from a school kid whose parents happen to be manual scavengers. These everyday acts of exclusion further propel the chain of discrimination. She writes,

“…many of the people we met there did not seem to have much of a problem with the work they were doing. The thought had never occurred that there could be some work for them apart from this.”

Singh also tells us about her meeting with Meena in Delhi, a manual scavenger whose entire family was in the same practice. Highlighting the hazardous effects of manual scavenging on women health, Singh details Meena’s account of helplessness.

While working as a manual scavenger, Meena was pregnant, and the practice affected her physically and mentally, making her daughter handicapped. Meena told Singh that the doctor had intimated to her that manual scavenging could infect her uterus. However, Meena’s family had no other source of earning, and she had no idea how much it could affect her child.

This incident is also significant to highlight that against the popular imagination that manual scavenging is limited to the rural landscape involving dry latrines; the truth is that it is as much an issue in cities. Furthermore, with more septic tanks and sewers, the problem is all the more hazardous.

The book extensively addresses the ill effects on health due to the practice, such as nausea, headaches, respiratory and skin diseases, diarrhoea, etc., which are prevalent among women and men alike.

Many reports have flagged additional issues related to the practice, such as excess consumption of alcohol and tobacco. Often manual scavengers consume them to bear the stench of filth and poisonous gases in the drains and around dry latrines. Singh covers this bit through Kusumi’s story. Kusumi from Bihar told Singh that such intoxication was necessary to keep them going.

These stories also tell how women in manual scavenging hardly get paid. Singh highlights the same in her interaction with Indira from Jhunjhunu district, Rajasthan. For instance, according to Singh’s account, the maximum which the women in Rajasthan got paid was one roti and ten rupees.

Singh also addresses Mahatma Gandhi’s problematic stance on manual scavenging and caste, first while talking about Gujarat and later towards the end of the book.

Gandhi described manual scavenging as an honourable profession and promoted its continuity. [1] While he denounced the Varna system later in his life, most of his statements around caste appropriated hierarchy.

Dr BR Ambedkar’s conflict with Gandhi is apparent in the Annihilation of Caste. It’s well known that Dr Ambedkar advocated against the caste system and ostracising Dalit and strongly opposed Gandhi’s view on caste. Singh discusses the same in the light of anecdote from Gujarat as the state witnesses vivid forms of discrimination even now.

The book covers Madhya Pradesh, Karnataka, Andhra Pradesh, West Bengal and Haryana, among others. As the book advances, the atrocities and discrimination get detailed and horrid, but Singh does no disservice to these anecdotes on account of the reader.

This book has the potential to make the reader feel the intensity and depth of the issues with manual scavenging. As women, children and families get shoved into manholes, sewers and septic tanks for survival, the discrimination grows louder yet muted.

Waiting for Justice: How the Courts, Law and Legislature Failed to Annihilate Manual Scavenging?

Singh details the failure of the court, administration and political state, talking about their resistance to eradicating manual scavenging. As the book enters the second part, Singh’s words become even more potent as they address the state’s own casteism.

Singh highlights the role of six organisation (including Safai Karamchari Andolan) and seven manual scavengers who had run a long battle to render the practice illegal. Here on, the book has a purposeful wit as it jibes the inefficiency of policymakers and courts.

In 1990, these efforts actualised as the Employment of Manual Scavengers and Construction of Dry Latrines (Prohibition) Act, 1993. But the Act was even more detrimental with a failure in implementation in most states. The unwillingness was evident. Moreover, the loopholes in the 1993 Act were manifold as the law itself created impediments to any practical change.

Singh highlighted the role of Indian Railways, infamous for being the biggest violator of the Act. Providing a statement from the affidavit filed by the railway authority in one of the cases before the Delhi High Court, Singh explains the railway’s impotence. It’s no secret that the railways have lied when it comes to employing or hiring manual scavengers on a contractual basis in the name of safai wallas.

Even twenty years after the passing of the 1993 Act, railways had built hardly any bio-toilets, which meant that almost all trains had litters on their tracks. Yet, the Indian Railways kept passing the buck to avoid the consequences of their failure.

These issues and the government’s inability were flagged ahead of the Supreme Court. As a result, the SKA and other organisations fought in twenty-three High Courts to better implement legal provisions and other suggestive measures such as flush equipped toilets in houses, bio-toilets in trains by the State government.

The Prohibition of Employment as Manual Scavengers and Their Rehabilitation Act 2013, when eventually passed as an amendment to the 1993 Act, had its own loopholes.

These issues came to the fore right after it was promulgated and the 2013 Amendment Act looked promising only as far as it decided criminal liability.

Explaining the definition of Manual Scavenging/ Scavengers at the end of the book in the appendices reduces the intensity of the positive change required to eradicate manual scavenging. The same was done when writing the historical perspective of manual scavenging.

The stats concerning dry latrines with illustrations in the appendices are insightful and revealing and back the narrative well. The book is more so compelling as it is sensitive to gender and the gendered idea of caste. Singh doesn’t shy away from calling out the government’s casteist outlook, which forces manual scavengers into the deepest ends. The book reflects society’s mindset towards enslaving the people in this infernal practice decades after India’s Independence.

Bhasha Singh originally published the English version of the book in 2014. However, the book continues to be valid even today. The scores of deaths due to manual scavenging have only increased over the past few years.

While the government data tries to underreport reality, the on-ground situation is becoming increasingly grim. The rehabilitation and one-time cash assistance as promised after the 2013 Act is also not implemented well.

Last year, the government had announced new measures to end manual scavenging as a part of the Swachh Bharat Abhiyan. The Centre had moved an Amendment Bill in 2020 during the monsoon session to amend the 2013 Amendment Act. But in March this year, the government went on a backfoot as the Ministry of State for Social Justice and Empowerment claimed that there was no proposal to amend the 2013 Act.

In the wake of present-day condition, Bhasha Singh’s book becomes more critical in highlighting bureaucratic incompetencies and the state’s unwillingness to seek change.