Many have argued against a slew of anti-conversion laws passed in several Indian states. These laws pose a fundamental challenge to individual autonomy and freedom and doubts women agency to exercise their will. Further, they are deemed problematic as they are born out of a political narrative that preceded them.  In this context, Anshula Sinha understands the Madhya Pradesh anti-conversion law, which resurrected as a harsher version of the earlier implemented anti-conversion law in the state. 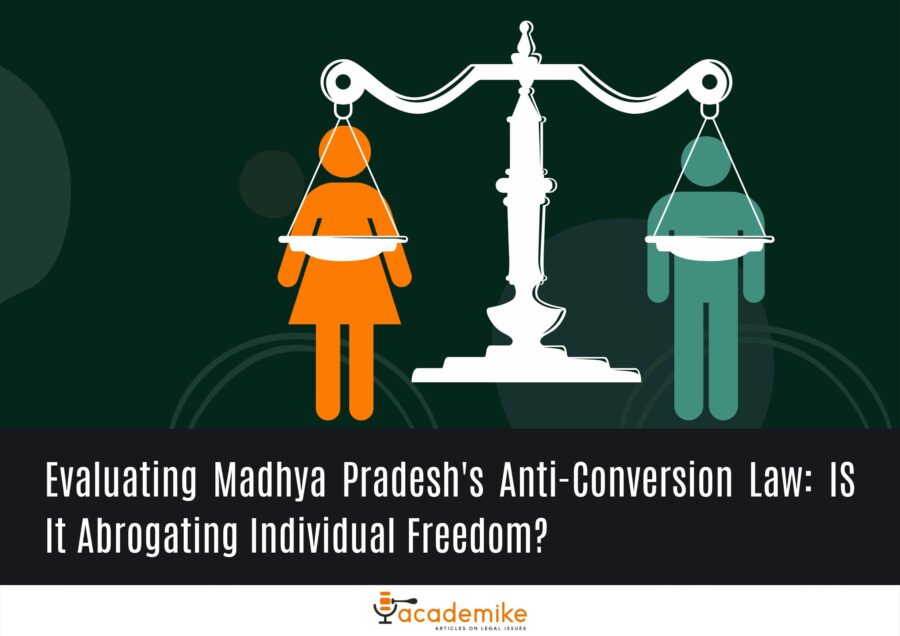 Laws against conversion date back to the colonial era in India. They existed in several princely realms, including Kota, Bikaner, Jodhpur, Raigarh, Patna, Surguja, Udaipur, and Kalahandi.  As a result, princely States were the first to pass anti-conversion legislation before independence.

These laws were enacted during the pre-independence period in response to concerns about public order or foreign influences within princely domains in the context of creeping colonialism.[1]

Although the Indian Constitution imbibes secularism, several political parties continue to use religion to influence election campaigns. In addition, since conversion laws are included in the State List of the Seventh Schedule, some States have passed their anti-conversion legislation.

This happened after the Indian Conversion Regulation and Registration Bill of 1954, the Backward Communities (Religious Protection) Bill of 1960, and the Freedom of Religion Bill of 1979 were rejected due to lack of majority support in Parliament[2].

Odisha was the first to implement the anti-conversion law. However, Orissa’s Freedom of Religion Act 1967 was declared unconstitutional by the Orissa High Court.

The Uttar Pradesh anti-conversion law, popularly known as the ‘love jihad’ Act, attracted much attention due to its controversial provisions.

The earliest Act proscribing conversion in MP, the Dharma Swatantra Adhiniyam,[13] was introduced in 1968. However, the same got dissolved with the enactment of the 2020 Bill. It was reasoned that its definition was insufficient to deter forced conversions in the current circumstances. Thus,  a call for a new one with stringent punishment was legitimate.

The newly enacted legislation by the Madhya Pradesh government claims to stop forced religious conversions on the pretext of marriage and the use of force, misrepresentation, or other fraudulent means for conversion[14].

The new Act requires that a person[15] who wishes to undergo a religious conversion (of their own free choice) and the priest who performs the conversion notify the District Magistrate at least 60 days before the desired conversion date.

The feature is equally absurd and exceptional, for it mandates that the priest performing a conversion notifies the District Magistrate.[16] However, in the UP version of the anti-conversion law,[17] the person converting out of free will needs to notify themselves.

Under the 1968 Act, the person aggrieved, parents and siblings could register the offence. But in the new law, the guardian or the custodian court could complain, after which it will be registered with the police.

A family court will declare the marriage null and void if it is in contravention with the new law.[18] After the marriage is annulled, the child born out of such marriages will also have a right to their father’s property.[19]

Additionally, children and women will be entitled to maintenance, even if the marriage is declared null and void.[20]

Thus, we can infer that conversion laws are projected as part of a larger ‘protective’ legislation category aimed at specific groups, most commonly women.

In fact, the entire narrative around the anti-conversion Ordinance 2020 was supported by this reasoning of safeguarding women. For instance, the Madhya Pradesh Chief Minister Shivraj Singh Chouhan pressed a need for a ‘stronger punishment to protect the lives of daughters’. Further, also drawing a semblance between the 2020 Ordinance and the ‘Beti Bachao’ campaign.

As defined by Article 2 of the International Covenant on Civil and Political Rights(ICCPR), the right to change religion is considerably more than only freedom from direct and indirect compulsion by the active state. It obligates the state to recognise and ‘ensure’ the rights outlined in the treaty. As a result, being passive on the part of the state is insufficient if the right to change faith is not a real right in practice.[21]

These laws may offer protection, but they also pose limitations on people and individual freedom.

Now let’s look at some problematic provisions of the anti-conversion laws.

These laws bestowed unchecked powers upon the authorities to intrude individuals’ choice of partners or religion, violating the right to privacy, autonomy, and personal liberty. Moreover, the requirement of giving prior notice is against the Special Marriage Act, 1954.[25]

These anti-conversion laws, though prima facie, seem to protect the individuals, but the main motive is preventing the person from converting to a particular religion.

The offence is cognisable and non-bailable. Thus, the police can arrest the accused without a warrant.[27]

Again, this provision is problematic, as instead of the prosecution, the burden of innocence lies upon the accused.

In  UP,[28] the Allahabad High Court held that it is not mandatory under the Special Marriage Act to publish 30-day compulsory notice[29] of their intention to marry as provision goes against the fundamental rights of liberty and privacy and the freedom of choice of marriage. The same has been reiterated in various previous judgements of the SC.

Since the same is against Article 16 of the Universal Declaration of Human Rights,[30] which underscores the fundamental importance of marriage as an incident of human liberty.

Also, the Constitution of India guarantees freedom of religion from articles 25 to 28.

Even going by the data, the provisions of the Act seem like a stretch. For instance, only 2.21 per cent of all women between the ages of 15 and 49 were involved in interfaith marriages, according to a 2005 survey by the Indian Human Development Survey (IHDS) and the National Council of Applied Economic Research (NCAER)[31].

Indian courts, through various landmark judgements, have tried to uphold the right to choose a partner of a person’s choice as a fundamental right, additionally reiterating that this right shall not be affected by the differences in faith and religion.[32] Further, it held:

“the family, marriage, procreation and sexual orientation are all integral to the dignity of the individual, which tells that the right to life is not merely an animal existence.”[33]

The Supreme Court, in various instances, have given judgement upholding the right to choose a partner of a person’s choice as a fundamental right.

The court has also reiterated that this right shall not be affected by the differences in faith and religion. It traces back to cases such as Lata Singh v. State of Uttar Pradesh[34]and  Shakti Vahini v. Union of India.[35]  In these cases, the SC reiterated that a person’s right to marry, regardless of their religion, is part and parcel of their fundamental right under Article 21 of the Constitution.

In Trishla Rai and another v. the State of UP,[36] the Allahabad High Court held that individual autonomy should be given priority in such cases. Further, as later defined by the KS. Puttaswamy v. Union of India[37] decision, an individual’s autonomy is one’s ability to make decisions in vital life matters.

Furthermore, in Shafin Jahan’s case[38], the Supreme Court upheld the freedom to choose a life partner as an absolute right, regardless of religion or beliefs. As a result, it can be argued that any law that denies any one of these rights is unlawful.

It is also argued that the same safeguards human rights by preventing fake, fraudulent or deceitful marriage premises, providing legal remedies to those duped or forced into conversion.

However, this narrative was challenged in the Gujarat High Court. After that, the HC stayed certain Sections of the Gujarat anti-conversion law, granting protection to interfaith couples. The HC held,

“We are of the opinion that pending further hearing, rigours of Section 3, 4, 4A to 4C, 5, 6, and 6A shall not operate merely because the marriage is solemnised by a person of one religion with another religion without force, allurement or fraudulent means, and such marriages cannot be termed as marriage for the purpose of unlawful conversion,”

Anti-conversion laws in India are also defended as ‘protective’ legislation, which is meant to protect women from being ‘lured’. However, this notion also nullifies and overlooks women’s autonomy and free mind.

While this Act is posed as a protective measure, some provisions affect a person’s fundamental rights and autonomy, for example, mandating prior permissions to exercise free will. This bestows excessive powers upon the authorities to intrude individuals’ choice of partners or their religion, leading to violation of the right to privacy, autonomy and personal liberty.

Therefore, these laws compromise fundamental rights like Articles 21 and 25 of the constitution as Article 21 incorporates an individual’s choice of partners.

Furthermore, the notification of granting someone else the authority to solemnise a marriage violates the Special Marriage Act, 1954, which was intended to allow inter-caste and inter-religious marriages.

The laws ostensibly seek to end conversion through unlawful means, expressly prohibit any conversion for marriage, even with the individual’s consent, except when a prior sanction is obtained from the state. Therefore, it needs to undergo judicial scrutiny before it further tears down whatever’s left to the secular fabric of India.

[21] Saadia Suleman, Freedom of Religion and Anti Conversion Laws in India: An Overview