Juvenile justice systems across the world promise more than they deliver. It is believed that juvenile justice is meant to rehabilitate children who have demonstrated forms of criminality. However, in India, juvenile homes have been called out several times for the lack of infrastructure or the quality of ‘care’ that the Act promises. Even in the United States, many have questioned the racial discrimination ingrained within American policing. While keeping in mind the fundamental issues with juvenile justice systems, Maram Deepika provides an understanding of juvenile justice systems in the US, UK and India. This article revisits the juvenile justice legal regimes in the three countries and details significant cases that transformed the law. 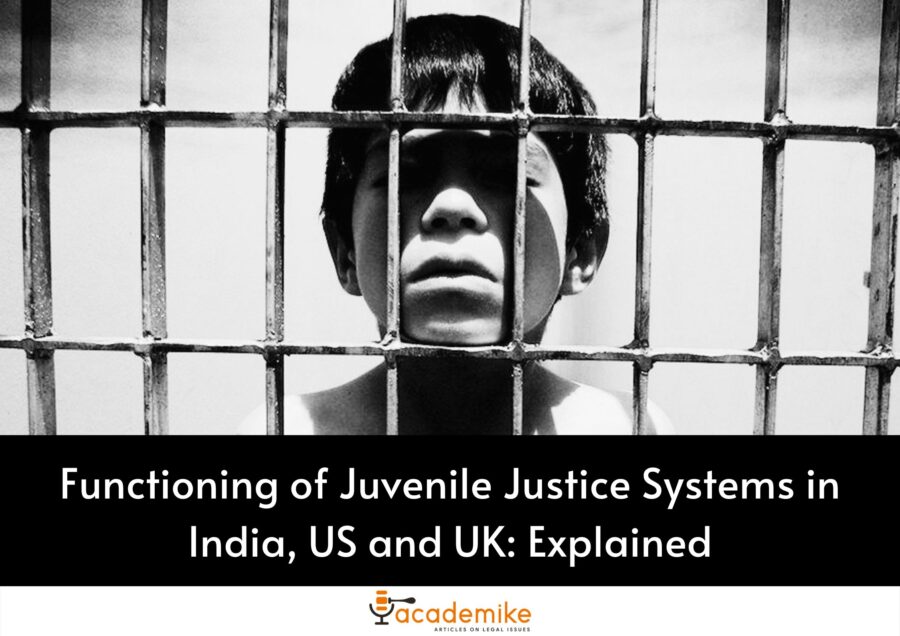 “I’ve got thoughts of determination in the midst of hard times. Hard facts of life replace nursery rhymes in the hearts and minds of our city’s youth.”

The modern legal system must recognise a minor’s autonomy and independence.  Children commit crimes for different reasons than adults.[1] Thus, a juvenile equity arrangement of any nation ought not to follow the criminal equity framework of an adult. [2] Therefore, almost all democratic nations have developed juvenile justice systems that cater to other subjectivities.

Establishing juvenile justice systems is essential for maintaining public safety, rehabilitation, and developing various skills. In addition, juveniles need social support to return and meld with society eventually. The idea is that juvenile justice shouldn’t be based on retribution but instead on restitution and care.

Some semblance of a juvenile justice system has existed since the colonial period in India. In Roman law, the principle of doli incapax was used to protect young children from prosecution. However, unlike the British version of child delinquency, India officially passed the Children’s Act in 1960 to create uniform standards for the juvenile justice process.[4]

In the US, the thought and concept of the juvenile justice system emerged in the nineteenth and twentieth centuries. In those days, juvenile courts were based on the legal doctrine of parens patriae, meaning ‘parent of the nation’. In feudal times various obligations and powers, collectively referred to as the ‘royal prerogative’, were reserved to the king. The king exercised these functions in his role of father of the country.

Growing up, the social and financial conditions of a child affect their behaviour. Children need assistance and guidance to differentiate between good and evil. And the atmosphere in which a person is raised dictates their social, psychological and emotional well-being.[5]

If a child is guided and corrected on making a mistake, they will only develop an attitude and perception of what is right. Children develop emotions like love, affection, rudeness, anger, hatred, compassion, sympathy and empathy during their upbringing and experiences. Parents play a significant role in this aspect.

There have been many cases where couples face many problems and part ways. This affects children in many ways. Quarrels, domestic violence, dowry death, economic havoc, lack of education are various aspects that impact children in more than one way. And the same can leave a scarring memory or impression of the world.

Other reasons that could stray a child behaviour includes the following conditions.

When there is a loss of socialisation and family support, children seek out other ways to be seen and noticed. But, unfortunately, sometimes they also get into deviant companies or inflict harm on themselves or others.

Law and Juvenile Justice System in India, the US and UK

In India, when the increasing rate of juvenile delinquency started becoming an issue, the Government of India adopted a National Policy Resolution in 1974. This resolution provided guidelines and set priorities to organise programmes for children who were indulged in deviant behaviour.[7]Some guidelines were as follows:

In the Constitution of India, the Directive Principles of State Policy under Article 39(f) also provide[8] that the state shall, in particular, ‘direct its policy towards securing that the childhood and youth are protected against exploitation and moral and material abandonment’. [9]

The 2015 Act was informed by the Nirbhaya rape case where the accused was above 16.   Thus, the 2015 Act introduced the provision where children aged 16-18 involved in criminal offences would get tried in a regular court. [14]

Dr Subramanian Swamy And Ors v. Raju Thr. Member Juvenile Justice[15] is a landmark case that caused many developments and changes in the juvenile justice system of India. Swamy, one of the petitioners, had sought that in the Nirbhaya rape case, the fifth accused, a juvenile, must not be tried under the JJ Act owing to the severity.

He had also argued that juvenile justice was not meant for such heinous crimes. Therefore, he was not entitled to the benefits that extend from the JJ Acr.

The Supreme Court dismissed the petition by stating that the aim behind treating a person below 18 years of age as a juvenile is to ensure their rehabilitation and transform them into better citizens of the country.[16]

Gopinath Ghosh v. State of West Bengal [17]is another case where respondent Gopinath was convicted under Section 302 of IPC.

It was urged before the Supreme Court that the accused was under eighteen on the day he committed the offence. Hence, the appellant was a ‘child’ according to the ‘West Bengal Children Act 1959’, and the Court had no jurisdiction to deal with the case. Thus, again, the case was heard in Supreme Court.

The Court called for a finding the age of the respondent and held that Gopinath was less than 18 years, and the Magistrate was directed to proceed as per the West Bengal Children’s Act 1959.

In The United States

In the United States of America, the juvenile justice system was first established in 1899 in Cook County, Illinois, which had a rehabilitative approach.[18]

The original juvenile justice system believed that youth commit crimes due to immaturity and impulsivity. So instead of viewing offensive juveniles as criminals, the juvenile system in the US engaged in their rehabilitation. The framework accepted that these adolescents can be changed to decent residents.

Adolescent courts frequently centred around the eventual benefits of the minor, with the state taking a parens patriae or ‘parent of the nation’ approach. The early adolescent equity framework valued its absence of custom and adaptability and didn’t have numerous procedural shields for minors. The Illinois Juvenile Court Act of 1899 established special rules and procedures for dealing with children under the age of sixteen. This was the recent Act according to which the Juvenile justice operated.

Further, Individual States set their own age of majority in the US. A person who is below the age of 18 is a minor.[19] But in some areas, it is even considered minor if a person is below twenty-one.

The Child and Youth Welfare Code, Precedential Decree No. 603 define a youth offender as ‘one who is above nine years of age but less than 21 years of age at the time of the commission of the offence’. [20]

The case In re Gault[21]dealt with the rights of juveniles in the US. It was held for the first time that juveniles have similar rights as adults, like the right to an attorney, notice of charges, remain silent, etc.

The Gaults were ineffective in their bids identified with the unlawful processes being followed and laws related to juveniles in the state. The Court held:

“absent a valid confession, a determination of delinquency and an order of commitment to a state institution cannot be sustained in the absence of sworn testimony subjected to the opportunity for cross-examination.”

Roper v. Simmons[23] is another case related to juveniles. In the US, imposition of the death penalty for cruel crimes committed by juveniles was believed to be harsh and unusual punishment according to the Eighth Amendment.

It was observed that the Court consistently limited the death penalty to the ones who commit heinous crimes. Justice Kennedy pointed out some general characteristics that separated children from adults and those juveniles who committed heinous crimes. First, juveniles lack a sense of responsibility and maturity and are not in a position to understand the consequences of the Act they committed. Second, juveniles are easily influenced by negative people and peer pressure. Third, a juvenile’s character is not as similar to that of adults. Therefore, the former possess far more potential for rehabilitation.[24]

In The United Kindom

Scotland’s juvenile justice system is based on a policy that concentrates on rehabilitating accused juveniles. In England and Whales, police have the authority to use discretion in handling juvenile dispositions.[25] In Scotland, the Act which is used is the Criminal Responsibility (Scotland) Act 2019.[26]

In JM (A Minor) v Runeckles,[30] the defendant appealed against his conviction for sexual assaults.  At the time of the commission of the offence, the defendant was aged below eighteen. In Section 50 of the Children and Young Persons Act 1933, it has been stated that ‘it shall be conclusively presumed that no child under the age of 10 can be guilty of an offence’. The prosecution should show that the accused was aware that their behaviour and actions were more than merely childish naughtiness or mischief. They must have realised that the conduct was wrong. C v. DPP [31] is the other case that dealt with the age and the degree of harm caused by the accused juveniles.

Juvenile delinquency is a century-old problem across different legal systems. Thus, it is not only a problem in India but in many other countries. Irrespective of age, people can display deviant behaviour. However, juvenile justice systems enable more scope for rehabilitation as the accused have an entire life to recover and restart.

The age to be tried as a juvenile differs from country to country. Thus, the laws and statutes applicable and followed by various juvenile justice systems vary across nations.

The police investigation, conviction, pre-trail, sentences, the bail system, youth court all come under the youth justice umbrella. A combination of factors like family conditions, peer pressure, illiteracy and economic condition, among other things, could affect a person to cause injury to someone. Thus, the state must take responsibility for educating its children and providing fundamental necessities.

Further, establishing channels of communication between children and society and family could foster a healthier relation.

[14] Gourvika, Juvenile Delinquency and Juvenile Justice System in India, National University of Study and Research in Law, May 7, (2020).

[19] Determining the Legal Age to Consent to Research. It’s not always 18!, Washington University in St. Louis, 2012.