Indian law in consonance with Private International Law provides for the enforcement of judgements passed by courts of territories outside India through relevant provisions under the Code of Civil Procedure, 1908. This article aims to grant to the reader an overview of the law on enforcement of foreign judgements in India. 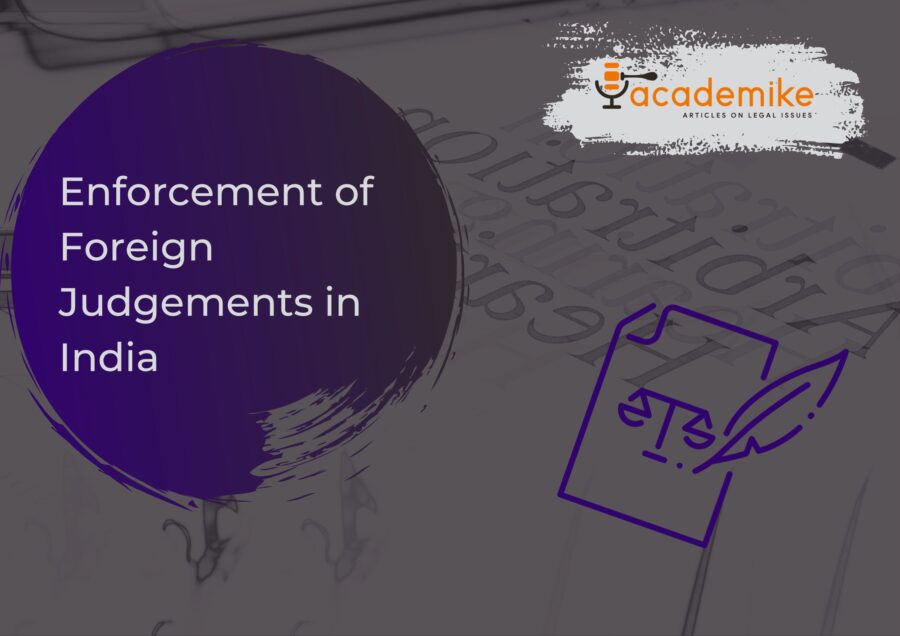 The enforcement of judgements of “Foreign Courts” in a country comes under the ambit of Private International Law. Sections 13 and 14 of The Code of Civil Procedure, 1908 are a manifestation of Private International Law in Indian domestic laws and the aforementioned sections and related judicial pronouncements (since India is a common law country) govern the enforceability of foreign judgements in India

At the beginning, it is pertinent to define the meaning of the terms “Foreign Judgement” and “Foreign Court” to ensure clarity.

The term “Foreign Court” refers to a court/judicial body which is situated outside the territory of the Republic of India and has not been established and continued by the Union Government [1].

For e.g., courts established in other countries such as Australia, England, France, Germany etc. are considered as Foreign Courts as per the definition given in the CPC.

The term “Foreign Judgement” refers to a judgement Passed by a foreign court [2].

The enforcement of a judgement passed by a foreign court is based on the principle that the adjudication of a dispute by a foreign court of competent jurisdiction gives rise to a legal obligation to execute the verdict of the court.

While the rules with respect to Private International Law and the enforcement of its principles differ from nation to nation, there are certain regulations which are deemed to be applicable to almost all civilised legal jurisdictions.

This nature of recognition is catered for not for the sake of international courtesy but instead for the furtherance of justice, equity and good conscience and to take foreign law and judicial pronouncements into consideration can in no manner be considered as derogation of the sovereignty of a nation – state [3].

As rightly stated by Cardozo, J., in the case of Locks v. Standard Oil Co.[4], refusal of courts in one jurisdiction to act upon the decrees passed by courts possessing appropriate jurisdiction in foreign jurisdictions will make it difficult to carry out tasks in the modern world. He further stated that there arises no reason to not recognise foreign judicial pronouncements unless the same would lead to a violation of the principles of justice, equity and good conscience or is against morality and public policy.

FOREIGN JUDGEMENTS WHEN NOT BINDING

Under Section 13 of the CPC, a foreign judgement shall operate as res judicata with respect to the parties involved except when one or more conditions specified in clauses (a) to (f) of S. 13 become applicable.

According to the principle laid down by AV Dicey [5] and referred to in the case of Viswanathan v Abdul [6], a judgement passed by a foreign court cannot be assailed on the basis of either mistake of law or mistake of fact.

Thus, a foreign judgement shall not be considered as conclusive in the following 6 cases:

It is a universally recognised and essential principle of law that a judgement if passed by a court with respect to a dispute which it lacks the jurisdiction to adjudicate is null and void.

Thus, applying the same rule to Private International Law and its embodiment in the CPC, a foreign judgement must have been passed by a court of competent jurisdiction to be recognised as being conclusive and thus be enforceable [7]. The court must be competent by virtue of both the law of the state and by the definition of International Law and must have directly adjudicated upon the legal matter which is being pleaded as res judicata to be enforced.

Furthermore, what is considered “conclusive” is the judgement and not the ratio decidendi i.e., the reasoning behind the judgement.

A landmark judgement in this regard is the case of Gurdyal Singh v. Rajah of Faridkot [8].

In this case a person “A” filed a suit in the court of the native state of Faridkot against a former employee “B” for misappropriation of a particular sum of money belonging to “A”. B was a domicile of another native state Jhind. B had travelled to Faridkot in 1869 to work under A but left Fardikot in 1874 and returned to Jhind. The present suit was brought by A against B in 1879 when B was neither residing in or was a domicile of Faridkot and B did not appear at the hearing of the suit in Fardikot and an ex parte decree was passed by the court at Faridkot against B.

In order to be considered conclusive, the judgement passed by a foreign court must have been given on the merits of the case [9].

A judgement is said to have been issued on merits if the judge, post the conduct of a fair hearing, allowing both parties to represent their case and scrutinising the evidence, rules in favour of a party to the dispute.

Thus, in certain cases such as when a suit is dismissed due to the plaintiff failing to appear in court, such judgements are not considered to be judgements made on the basis of the merits of the case.

However, a judgement passed by a court ex parte will not lead to it automatically being considered to not be based on merits of the case [10].

A judgement which is not consistent with, is against or is predicated upon an incorrect interpretation of international law or a refusal to recognise Indian law wherever applicable shall not be considered to be a conclusive judgement5.

However, the mistake must be prima facie apparent in the proceedings.

As stated in the case of Narasimha Rao v. Venkata Lakshmi [11], when a foreign judgement is delivered based on grounds which are inconsistent, unrecognised or in transgression of Indian or International law, it will not be considered conclusive and shall not be enforceable in India.

A judgement passed by a court must be so obtained after following the due process of law. This means that the court must abide by and enforce the principles of natural justice.

A judgement which has been passed in ignorance of/in violation of the principles of natural justice will be regarded as being null and void and the trial shall be considered to be “coram non judice”.

In the case of Satya v. Teja Singh [12], the husband was able to divorce his wife by misleading the court stating that he was an American citizen even though he was not. The Supreme Court of India recognising that the husband had defrauded the foreign court held that the decree of divorce would not be enforceable and was null and void.

When a foreign judgement is predicated upon a violation of Indian law, it would not be enforceable in India.

It is imprudent for any nation – state to adopt blindly the rules of Private International Law. Each and every case that is adjudicated by the courts in the Republic of India must be done in accordance with Indian law and must not go against Indian public policy.

In the case of Ruchi Majoo v. Sanjeev Majoo [13], the Supreme Court held that in matters related to child custody, the most important issue is that of the welfare of the child. As such, a court in India must review the case on its own and adjudicate the matter, taking into consideration the ruling of the foreign court.

1. 44A of the CPC states that a “Reciprocating Territory” is any country or territory outside the Republic of India which the Union Government can via notification in the Gazette of India declare as being a reciprocating territory.

The pathway to be taken for enforcement of a foreign judgement depends on whether the court is present in a reciprocating territory or not.

When an execution application is being filed, the original certified copy of the relevant decree and a certificate obtained from the superior court has to be attached to the application.


When the relevant judgement/decree has been passed by the court of a territory not designated as a reciprocating territory by the Union Government, the applicant must file a suit on the foreign judgement or the original cause of action or both in a court in India possessing competent jurisdiction

In the case of Marine Geotechnics LLC v/s Coastal Marine Construction & Engineering Ltd.[15], the Bombay High Court held that when a foreign court from a territory which is not a reciprocating territory passes a decree, the person who has obtained such a decree must file a suit on the foreign judgement or the original cause of action or both in a court in India possessing competent jurisdiction. This is because the foreign decree cannot be directly executed. Only a domestic decree which has been passed by an Indian Court of competent jurisdiction which is based on a suit based on the foreign decree is enforceable. This decree is obtained only when the decree holder can show to the Indian court that the foreign decree satisfies the test as laid down in S. 13 of the CPC.