A lot has been written about corruption in Nigeria since independence. Even though the country tried to inculcate transparency and accountability through reformations, it seems to retreat to its past. With eclipsing free speech and failing legal machinery, corruption has only surged. Damilola Bajo describes the many instances of corruption in Nigeria and how they have affected democracy. In this commentary, she moves ahead with a solution-oriented approach to counter corruption, arguing how collective desire and change can propel effective policy implementation.

By Damilola Bajo, a second-year law student at the University of Lagos. She has previously worked as a secretary for a non-profit organisation. Damilola Bajo is also a member of the Lawctopus Writers Club.

Corruption in Nigeria dates back to the independence era (circa 1960), existing from the onset of post-colonial Nigeria. At the time, corruption was prevalent but covert. However, it eventually became the norm due to public administration and its oil and natural gas discovery.[1]

Today, nepotism, greed and megalomania, among others, together add up to corrupt practices. It is so widespread that many countries warn their citizens from visiting the country,[2] and many experts decry Nigeria’s deplorable state.[3]

Ironically, throughout history, several political campaigns have been launched to discourage corrupt activities. And yet, the first, second and third republics were barraged with military incursions on accounts of corruption in a civilian rule. As a result, democracy had almost no breathing room.

The current republic, which began in 1999, brought some hope for Nigeria after Sani Abacha, the despotic military dictator, died.[4] However, even after adopting democracy, Nigeria had sustained corruption, borrowed from its past under military rule.

After independence, many anti-crime and -corruption commissions such as the Economic and Financial Crimes Commission (EFCC)[5] and Independent Corrupt Practices Commission (ICPC) were set up. Further, years after the EFCC was formed, several other policies and laws got promulgated to fight corruption and crime.

For instance, in 2016, the Ministry of Finance had promulgated the ‘whistle-blowing policy’ to encourage people to disclose corrupt practices. [6]Another notable measure against corruption that President Mohammed Buhari brought was the so-called anti-graft war in 2015.[7]

Despite the innumerable measures taken to curb corruption, there has been little to no impact but retrogressive growth. Electoral activities are fraught with malpractices, document forgery and violence,[8] and living conditions are on the far end of the spectrum as food prices skyrocket.[9]Additionally, for a few years now, Kidnapping has become a lucrative endeavour.[10]

An analysis conducted by SB Morgen (SBM) Intelligence revealed that at least $18.34m was paid to kidnappers as ransom between June 2011 and March 2020. Moreover, embezzlement has become something of a duty for public officials.

To top it all, the Transparency Corruption Index placed Nigeria in 146th position in 2019. It came further down to 149th position in the past year.[11] Ironically, the only kind of growth the country has ever seen.

A society void of corruption and its shenanigans is the ideal society. Leaders and followers alike would move with coordinated trust. There would be no nepotist favours, and misappropriation of funds would be a far-fetched idea, let alone a persistent phenomenon.

While this statement sounds far too optimistic and ideal, a country needs to desire a perfect society first, and perhaps only then it can achieve it.

But, of course, progress does not stop at desire.

We must take actionable and practical steps to prevent corruption in Nigeria. We cannot merely set up anti-corruption policies and commissions but also give them enough autonomy, power, jurisdiction and financial support to eradicate the same.

Take, for instance, the case of Indonesia. The only reason the Corruption Eradication Commission of Indonesia was successful was that it had enough powers, authority and autonomy.[12]

Only through a collective and concerted realisation of desire and effort can there be a beginning to the end of corrupt practices. But, for all this and more to happen, we need to realise the corruption’s effects first as a society. We must then desire collective and social change that is far removed from a specific individual or authority.

“Anti-Corruption interventions work best when they are locally owned, country-led and supported by collective action from local stakeholders, with the international community playing a role in making them broad and powerful.”[13]

That said, desire influences behaviour, and with it as a driving force, no measure is too unreasonable or excessive. 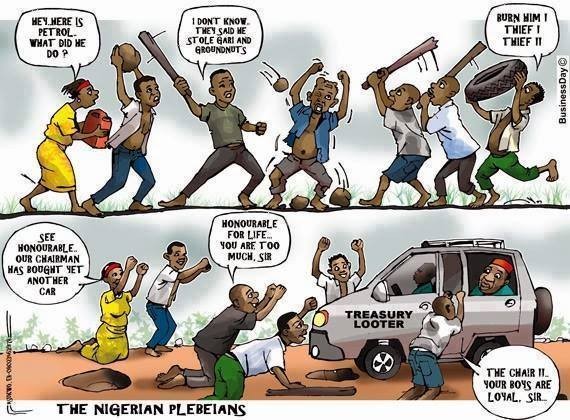 Establishing core institutions, such as the rule of law, an independent judiciary and general governmental accountability, is crucial for the functioning of any democratic society.

‘Justice’ must permeate all administration processes. The legislature must promulgate stringent anti-corruption laws while executive and judicial bodies must see to their enforcement. This will serve to stifle corruption.

For instance, Denmark’s criminal code proscribes all forms of bribery, embezzlement and fraud. In fact, in Denmark, bribery can incur six years of imprisonment.[15] Similarly, the Interior Persistent Offenders Policy (ISD policy) in the Netherlands is an ingenious way of dealing with persistent offenders.[16]

Botswana, one of the least corrupt countries in Africa, enacted several legislations, including the Corruption and Economic Crime Act of 1994, not to mention creating a court especially to prosecute corruption and fraud cases.[17]

Not like Nigeria hasn’t had similar laws that proscribe corruption, but the issue is primarily their implementation. In Nigeria, the Criminal Code and the Corrupt Practices and Other Related Offences Act criminalise corruption or related practices. For instance, accepting or giving gifts and facilitation payments are illegal, and individuals can be penalised with up to 7 years of imprisonment.

Despite having a solid legal framework, enforcement of anti-corruption legislation in Nigeria remains weak; in practice, gifts, bribery and facilitation payments are the norm.[18]

Some even claim that the EFCC is a mere political tool used to target enemies of the ruling politicians in Nigeria.[21]

On the other hand, the 2015 report by Transparency International also gives a gleam of hope. The research indicated that though there’s scarce evidence to suggest that reforms like EFCC have any real effect. However, their study, at the same time,  also asserts that ‘public finance management reforms, strengthening horizontal accountability mechanisms and transparency tools, such as freedom of information, transparent budgeting and asset declarations’ could control corruption.[22]

Part of reformation is also evaluating the process and how they function to facilitate democracy. And at the moment, Nigeria really is a giant whale, gobbling up every opportunity that could improve her deplorable state.

After implementing the interventions through legal reforms, we must measure their impact to adapt them to reach our goal. To this end, we must conduct qualitative and quantitative research on reducing corruption, arming ourselves with subjective assessments and measuring objective evaluations to see the impact of our interventions.

However, as Robert I. Rotberg rightly acknowledges,

“no accurate way exists as yet to assess absolute levels of corruption in territories on the basis of hard empirical data… those interested in ranking and comparing countries and in estimating degrees of speculation and chicanery are compelled to rely on less satisfactory methods such as public opinions surveys… anecdotal observational arrays and other subjective or essentially qualitative methods.”[23]

Still, we must salvage what we can. No measure is inadequate if it is used to its full potential

In this respect, we must not hold back on using technology to our benefit to evaluate and process newer forms of accountability.

Technological advancements can help us battle corruption in Nigeria to enable change in public and private spheres.[24] For the same, blockchain technologies can be really effective.

Brian Edmondson describes blockchain as a decentralised public network that allows people and companies to store and securely transfer information and currency instantly.[25]  It is called decentralised because there is no ‘owner’ and cannot be accessed without permission. In addition, it uses encryption and other layers of security, making it almost incorruptible. Also, blockchain provides that new transactions must follow the ‘consensus mechanism’, where people on a network necessarily concede to the addition or alteration of new data.

Integrating blockchain technology into public and private institutions in Nigeria will ensure the highest levels of transparency and trust. It will also allow for easy access to records and encourage public participation and build public trust.

Several private and public organisations have implemented blockchain for various uses, including remittances, cross-border settlements, and travel, among many others.[26]

What Else Must Be Done?

To alleviate corruption in Nigeria through technology or otherwise, first and foremost, we need increased and free access to information.

We also need laws and institutions that are not arbitrarily imported from developed countries without respect for Nigeria’s political, social and economic climate.[27]

One of the examples of free and fair access to information is the Maldives, which opened channels for public discussion for the first time in 2014. That year, the Maldives allowed the public to participate in the budget-making process, and the effect was a sharp rise in public participation.[28]

Though Nigeria promulgated the freedom of information Act back in 2011, it is still far from realising it on the ground. Although the Act mandated public and private institutions that utilised public funds or services to make their records public, it didn’t work quite well.

For instance, in 2018, a Nigerian court denied an application that had sought access to President Muhammadu Buhari’s medical bills. Similar examples persist years after the promulgation of the freedom of information Act.

These instances of curbing access to information make democracy feeble in more than one way. This eventually affects freedom of speech and how people interact with the legislature and executive. The same was evident when despite increased police violence, the government failed to act against police brutality. Result?

On October 20, 2020, young Nigerians marched in defiance of the unspeakable horrors and brutality perpetrated by the police. Still, the Nigerian government responded by sending high-profile artillery to murder the unarmed protesters. These innocent protesters were conducting a prayer vigil for the victims of police brutality.

The horrors only amplify as the Nigerian government continues to deny such incidents.

Therefore, to demand change, we must hope and desire. We must also work towards a democratic change as a collective, which means asking questions and deploying newer technological advancements that will facilitate transparency and hold administration and law accountable.

Gbemisola Adeoti’ poem ‘Ambush’ perfectly encapsulates the sentiment of this piece and why we need a concerted desire and actionable change:[29]

“The land lies patiently ahead,

Those who point away from a direction where nothing happens

Towards a shore of possibilities.”

[7] Criticized as being selective; focuses on the opp party

[25] Edmondson, B. (2019, October 16). Blockchain Explained: A Simple Overview of How It Works. The Balance Small Business. http://www.thebalancesmb.com/blockchain-explained-4773366.

[26] Haldane, M. (2021, January 17). What blockchain is, how it works and how China will lead the world. South China Morning Post. https://www.scmp.com/tech/blockchain/article/3117745/what-blockchain-how-it-works-and-how-china-will-lead-world.

[27] “Importing models of institutions from the developed world, which enjoys the rule of law, to a developing context with weak institutions and governance systems is inadequate in most countries, especially African countries.” Page 4. Chêne, M. (2015, May 11). Successful Anti-Corruption Reforms. Transparency International. https://knowledgehub.transparency.org/assets/uploads/helpdesk/Successful_anti-corruption_reforms.pdf.