Constitutional experts have written extensively about cooperative federalism in India and have highlighted several faultlines. While the Constitution makers made efforts to make governance truly collaborative, they also conferred specific powers to the central government, giving an upper edge to the Parliament in decision making. Although the need for concentrated power at the centre was felt strongly at the moment of the Constitution’s making, a lot has changed since then. Aradhana Swanand details various provisions in the constitution that allow and inhibit the full realisation of cooperative federalism. She also details the advantages and disadvantages of effective governance in a quasi-federal state like India. 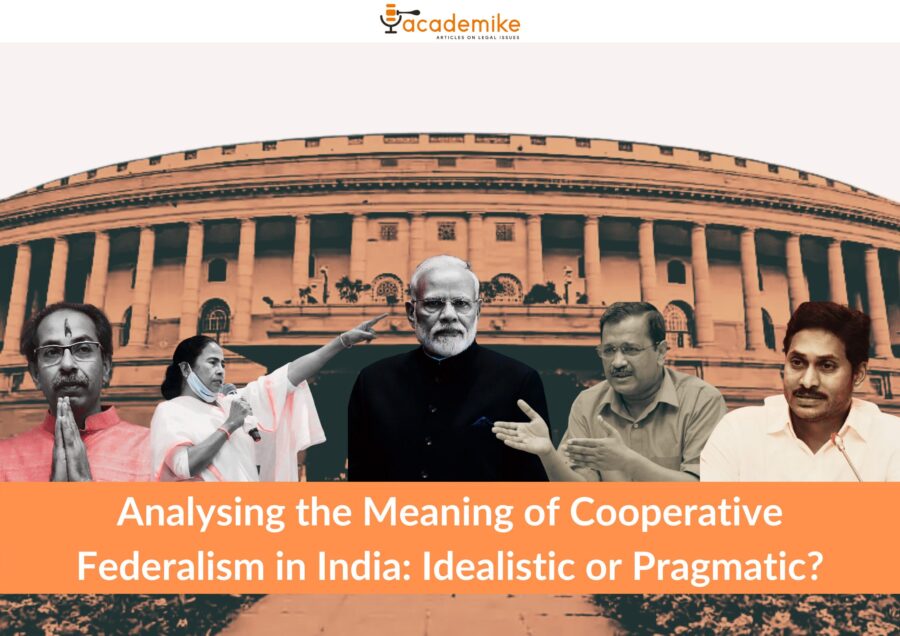 In a federal state, governance is constitutionally divided between the government at the Centre, state or provincial levels, and these governments function within their autonomous spheres.[1]

The Constitution of India provides for a federal system of governance that tends towards the Centre strongly.[2]

Federalism may be executive, cooperative, collaborative or competitive.[3] The Indian model of federalism is ‘cooperative’, as laid down by the Supreme Court in State of Rajasthan v. Union of India.[4]

Cooperative federalism means that though there is a constitutional provision for the distribution of powers, in practice, these powers are to be exercised jointly by the Centre and the states. As observed by distinguished jurist M.P. Jain, these governments are interdependent and not independent.[5]

While cooperative federalism is a constitutional ideal, many contend that it’s not realised entirely. The same could be because the central government is inherently more powerful than the state governments in India. And the Constituent Assembly made the central government relatively strong to curb the separatist tendencies among states, which were quite common at the time of the partition. Moreover, these powers make sense for administrative convenience because India has a vast geographical and cultural landscape with varied socio-economic and cultural backgrounds.[6]

However, with time, centralised power got abused beyond the excuse of carry-on anxieties from partition. As a result, we have slowly witnessed a change in the Centre’s response towards states, including exclusionary practices. These constitute unequal treatment between states, economic disparities among states and prioritisation of regional interests over national ones. Hence, abuses of power have hindered cooperative federalism in India.

At the same time, the constitutional framework, in conjunction with specific executive actions and measures, testifies the existence of cooperative federalism in India.

Article 1 of the Constitution of India states that India is a ‘Union of States’, which means that the states are not part of the country under an agreement and have no right to secede from it.[7] Although India is not called a ‘federation of states’, other provisions of the Constitution and judicial pronouncements highlight the characteristics of federalism, especially cooperative federalism. Few provisions also highlight instances where cooperative federalism doesn’t apply at all.

Article 245 vests legislative power in the Parliament to make laws for the country and states legislatures to make laws for their respective states. Article 246, read with Schedule VII, demarcates the subject matters upon which the Centre and states may enact laws. In addition, matters of governance are divided into three lists—the Union List upon which the Parliament may solely legislate, the State List upon which the state legislatures may legislate and the Concurrent List, both the Centre and the state may legislate.

Further, Article 261 provides full faith and credit to public acts, records and judicial proceedings of the Union and the state, promoting cooperation and faith. And Article 262 allows the Parliament to adjudicate inter-state water disputes. Further, In T.N. Cauvery Sangam v. Union of India,[8] the Supreme Court clarified that the Parliament could appoint a Tribunal for such adjudication.

Article 263 enables the establishment of Inter-State Councils, which are empowered to investigate those matters that interest both the Centre and states. Article 80 provides for the Council of States, representing states in the legislative process, and Article 54 affords the representation of states in the President’s election.

Article 312 facilitates the All India Services, common to the Union and states. India also has an integrated judicial system and hierarchy for the enforcement of both central and state laws. The State Reorganisation Act, 1956 enables establishing five Zonal Councils—statutory bodies that facilitate cooperation and coordination between states.[9]

In State of Rajasthan v. Union of India, the court identified cooperative federalism as the system of constitutional governance in India.[10]

Contrary to the spirit of cooperative federalism, the Parliament can legislate on matters that don’t fall under any List.[11] The Parliament can also legislate upon issues in the State List after the Rajya Sabha passes a resolution deeming it necessary in the national interest.[12] Further, it can also legislate during the Proclamation of Emergency,[13] with the consent of the states[14] or in furtherance of international obligation.[15]

Furthermore, where there is an inconsistency between a law made by the Parliament and the state legislature, the latter will be rendered invalid to the extent it is repugnant to the former.[16]

While Article 263  allows the Inter-State Council to make recommendations, it does not empower it to enforce or implement them. And while Article 253 empowers the Parliament to enact laws to give effect to international agreements, the Centre does not consult or represent the states while entering such agreements.

Article 155 enables the President to appoint the Governors of states, made on the advice of the Council of Ministers. The Governor holds office till he enjoys the President’s pleasure.[17]

Article 80 provides for the establishment of the Council of States. However, states are not represented equally but rather by the strength of their population.[18]

The most criticised provisions that break away from cooperative federalism in India are related to the imposition of the President’s Rule in a state.[19]And the President’s power to assent to bills of a state legislature when referred by the Governor.[20]

The Praxis of Cooperative Federalism in India

It is crucial to look beyond constitutional provisions to determine whether the goal of cooperative federalism has been realised. And assess whether the actions of the central and state governments reflect the spirit of such federalism.

Since the advent of the National Democratic Alliance’s rule in 2014, numerous steps have been taken to promote cooperative federalism, which is its goal.[22]

In 2015, the Planning Commission, the centralised policy-making body, was replaced by the National Institute for Transforming India, the NITI Aayog. The latter was touted as a think tank that aimed to enhance cooperative federalism by adopting a bottom-up approach and involving state governments in the policy-making process.

In 2015, the Centre accepted the 14th Finance Commission Report to increase the states’ share in Central tax revenues from 32% to 42%.[24] In 2016, the Centre proposed one of the biggest tax reforms in history, the Goods and Services Tax (GST).[25]

In 2016, through the 101st Constitutional Amendment Act, the NDA government introduced a single centralised tax, and it got implemented in 2017. GST removed all central and state indirect taxes, eliminated inter-state tariff barriers, but most importantly, it enabled every state to obtain a portion of the central government’s tax income. This move allowed underdeveloped states with low taxation revenue also to obtain funds.

The Centre also re-formulated programmes like the Rural Employment Scheme (MGNREGA) that states implement at their discretion.[26] The Central Government collaborated with the states to utilise resources and create infrastructure, similar to Amravati, the capital of Andhra Pradesh.[27]

On the contrary, there have been numerous instances where the Centre exercised unreasonable control or interfered with the affairs of the states, which resulted in growing concerns of over-centralisation.[28]

An oft-cited issue is the imposition of President’s Rule in states on fallacious grounds. For instance, in 2016, the Supreme Court had struck down the emergency for lack of sufficient grounds in Uttrakhand.[29]

There have been qualms regarding the appointment and dismissal of Governors based on political whims since time immemorial.[30] Many states opposed the promulgation of centrally sponsored schemes like Aayushman Bharat, PM-Kisan and Aspirational Districts Programme. This was deemed problematic because states had no role to play in formulating these schemes. Thus, many sensed encroachment.[31]

There is also widespread discontent over how inter-state water disputes like the Kaveri issue between Karnataka and Tamil Nadu and the SYL Canal issue between Haryana and Punjab got handled without any resolution.[32]

The legal framework in the Constitution of India and its exercise by the central and state governments indicates that while cooperative federalism has not been realised completely, it is not a myth either.

The scheme of distribution of powers, representation of states in law-making and policy-making, and the establishment of bodies like Inter-State Councils, Zonal Councils, the Governing Council of the NITI Aayog all demonstrate the conviction of the government to develop a unified framework of cooperative federalism.

However, one cannot deny the lack of balance of power between the Centre and states.

Moreover, one must also consider the lack of cooperation among states themselves, owing to regional and political motives. All these factors have hindered the realisation of a cooperating federation in India.

In a nation like India, where interests are not aligned, state governments must be incentivised to cooperate and be involved in policy-making, governance and dispute-resolution to achieve amicable outcomes.

The Sarkaria Commission[34] and Punchhi Commission[35] on centre-state relations gave several recommendations to cultivate cooperative federalism and suggested actionable steps. Certain constitutional amendments can better federalism and its actualisation. To list a few:

Apart from everything mentioned above, facilitating cooperation between the Centre and the states, especially for the subjects in the Concurrent List, will also be helpful.

When different political parties form governments at the Centre and State, often their interests don’t align. In such situations, it is vital to adequately utilise the constitutional and statutory institutions set up to resolve such conflicts and further the welfare of the people, which is the ultimate goal of governance.

We must also consider the spirit of our Constitution and the vision of the Constituent Assembly for India.

The Assembly deliberately empowered the Central Government to a greater extent because they believed that a strong central government was required to unite and align the interests of all states and provinces in a country with diverse populations and interests.

At the same time, the Constituent Assembly also provided autonomy to States, for instance, by allowing them to collect their taxes to meet specific needs. Thus, while India does not entirely mimic a cooperative federal system, it follows a quasi-federal system of governance. And for a smooth functioning federation, there needs to be cooperation, collaboration. But, additionally, it is also equally imperative that the Centre doesn’t infringe upon the state’s power.

[6] Mohit Bhattacharya, The mind of the founding fathers, in FEDERALISM IN INDIA: ORIGINS AND DEVELOPMENT 87 (N. Mukarji, B. Arora ed., Vikas Publishing House, 1992).

[21] Ambar Kumar Ghosh, The Paradox of ‘Centralised Federalism’: An Analysis of the Challenges to India’s Federal Design ORF, Sept. 2020.