In 1977,  six persons got subjected to sexual reorientation or ‘conversion therapy’ as a part of an experiment conducted by All India Institute of  Medical Sciences (AIIMS). In 2001, the Milap Project, a Naz Foundation India Trust program in Delhi, had filed a complaint against an AIIMS doctor who had abused a person psychologically to ‘treat’ homosexuality. This regimen of treatment included electroshock therapy, among other things.

Though homosexuality is no longer a ‘mental illness’ in India, conversion therapy has sustained itself in religion, moral and farce ‘medical practices’ that claim to ‘cure’ the abnormal.

From 2001 to Pride month 2021, it’s only unfortunate that we bring you an article on ‘conversion therapy’, a brutal practice that continues to be in force in the country and worldwide. Deepanshi Mehrotra uncovers the history of conversion therapy and its abuses on LGBTQIA+ persons. Needless to say, the only thing abnormal about homosexuality is its unacceptance in Indian society. 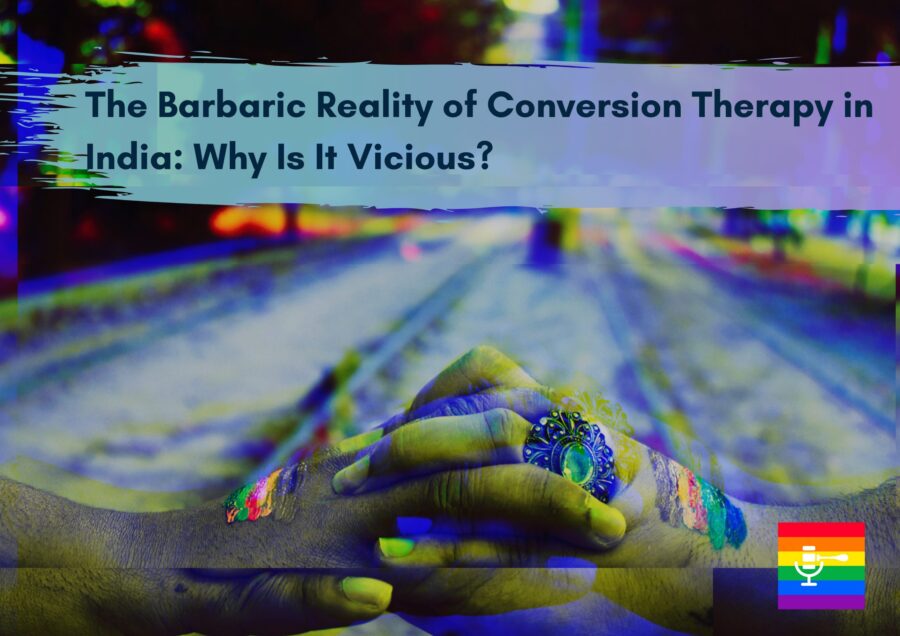 By Deepanshi Mehrotra, a law graduate from Symbiosis Law School in Pune, Maharashtra. Deepanshi is currently freelancing. Deepanshi is a member of the Lawctopus Writers Club.

Despite the decriminalisation of homosexuality in India and elsewhere, practices like conversion therapy serve as a blot on humanity. The viciousness of the treatment and its mere existence is telling of archaic notions of ‘normality’. These notions brutalise the LGBTQIA+ community in the grab of ‘religion’ and ‘medical practice’, gagging one’s choice of gender and sexuality by calling it an abnormality.

What Is Conversion Therapy? History and What You Must Know.

Conversion therapy, also termed reparative therapy or gay cure therapy, aims to change the sexual orientation of an individual to ‘cure’ them. It essentially seeks to suppress an individual’s natural desires and sexual identity through various methods ranging from prayers to ‘corrective’ physical violence.

Conversion therapy is based on the assumption that same-sex attraction is abnormal behaviour, which requires treatment.

Faith groups or healthcare professionals can conduct these therapies. These treatments aim at changing a person’s sexual orientation. The treatment varies from counselling, medication, giving hormonal injections, aversion therapy to institutionalising the person to perform hormonal castration or electrocution.

These practices combined with abuse and pressure from the family can result in severe physical and psychological trauma.

The history of curing homosexuality is as old as psychiatry itself. In the early years of the twentieth century, contemporaries of Sigmund Freud engaged in practices for ‘gay cures’.

LGBTQIA+ activism and Stonewall riots of 1969 led the American Psychiatric Association to remove homosexuality as a mental disorder from the Diagnostics And Statistical Manual Of Mental Disorders 1973 edition. After a couple of years, multiple mental health institutions also disclaimed conversion therapy.

India still faces continuous resentment from the LGBTQIA+ community due to the consistent use of conversion therapy to ‘cure’ homosexuality by changing a person’s sexual orientation. This practice bases itself on the societal bias that homosexuality is a form of perversion that requires medical treatment.

Only a few years back, in 2014, the Indian Psychiatry Association admitted that homosexuality is not a mental disorder, and there is no evidence to state that sexual orientation can be altered. However, there still exist mental health professionals and institutions that practise conversion therapy.

Conversion therapy essentially grew out of aversion techniques adopted by psychiatrists to cure alcoholism and other addictions considered harmful. These techniques push people to associate a particular form of behaviour with discomfort or pain. The mental health fraternity globally started deploying these techniques on people with same-sex attractions.

In 1983, the Indian Journal of Psychiatry published a report on using aversion techniques to cure homosexuality.

Patients attended sessions with a range of same-sex pornographic pictures and received electric shocks while viewing them to associate their arousal for the same-sex with pain. Subsequently, the photographs got replaced with heterosexual images, and the electric shocks would stop, thereby associating them with pleasure.

These visual aids were the primary stimuli, but occasionally sensory stimuli, including women’s perfume, used to affect the senses. Eventually, medical professionals started using behaviour modification techniques to promote the acceptability of heterosexuality to make a person more capable of procreation.

Even though some medical practitioners continue to practise conversion therapy on willing individuals, it does nothing more than perpetuating the unethical notion of curing something which is not a disorder.

These practices are discredited and claimed to be unethical by many medical practitioners, but they continue to persist due to continuous discrimination and biases towards the LGBTQIA+ community.

In 2015, an investigation conducted in Delhi by Mail Today revealed the use of hormone therapy, seizure-inducing drugs, and even electric shocks to cure homosexuality.

For a long time, even the medical fraternity viewed homosexuality as sexually deviant behaviour, which required conversion therapy.

However, one expected a change with increased activism, awareness and the Supreme Court judgment in Navtej Singh Johar v. Union of India, which read down Section 377 of the Indian Penal Code.

After the ruling, the Indian Psychiatry Association unequivocally affirmed that homosexuality is not a mental disorder. However, the medical fraternity exhibits varied opinions on the prevalence of the practice of conversion therapy.

Victor Madrigal-Borloz, an independent expert on gender and sexuality, submitted a report on conversion therapy to the United Nations Human Rights Council. The report concluded that 98 per cent of the people interviewed experienced severe psychological and physical damage after undergoing conversion therapy.

The primary issue is that the claims of altering an individual’s sexual identity using conversion therapy are false or discredited. These practices can condition a person to refrain from getting attracted to a particular sex, but they cannot modify the innate nature of an individual.

Multiple religious groups claim that these reparative practices can help individuals lead a ‘normal’ life by changing their sexual identity. However, research on such practices has disproven their efficacy and affirmed their harmful effects.

“…there is insufficient evidence to support the use of psychological interventions to change sexual orientation.”

Furthermore, minors are highly vulnerable to get rolled into undergoing conversion therapy. Such practices can result in severe consequences, including depression, anxiety, drug use, homelessness, and even suicide. In addition, the therapist’s alignment with the societal bias may reinforce self-hatred already experienced by the concerned individual.

The spread of Covid-19 has sent more people back to their family homes. This has led to a stark rise in the cases of individuals from the LGBTQIA+ community forced to undergo conversion therapy to become ‘normal’.

In May 2020, The Times of India conducted interviews and published anecdotes from the lives of people severely affected by conversion therapy. These anecdotes help one comprehend the plight of those undergoing these treatments willingly or forcefully.

In May 2020, Anjana Harish, a 21-year old bisexual woman, committed suicide in Goa after posting a video online. The video described how her family subjected her to conversion therapy for months, which eventually became one reason to commit suicide. Her suicide sparked protests throughout India against a complete ban on the practice of conversion therapy.

In another case, Pavithra, a 23-year old girl from Tamil Nadu, enunciates her trauma in a video after coming out to her family. Her family took her to multiple doctors, including a general physician, gynaecologist and psychologist, forcing her to undergo treatment to cure her.

These are just a handful of cases that have surfaced, highlighting the plight of individuals undergoing conversion therapy in India.

The Indian Psychiatry Association declared that homosexuality is not a mental illness and does not require treatment. Thus, doctors taking up such cases and assuring treatment and cure can attract legal liability due to medical negligence as per the Supreme Court judgment in Laxman Balkrishna Joshi’s case.

The Judiciary has played an active role in opposing the practice of conversion therapy in India. In addition, the Navtej Singh Johar v. Union of India judgment discourages ‘conversion therapy’.

In National Legal Services Authority v. Union of India, judges declared that nobody could be coerced to undergo ‘any form of medical or psychological treatment based on sexual orientation and gender identity’.

Furthermore, on June 7, 2021, Justice N Anand Venkatesh took a positive step in this direction by prohibiting conversion therapy in his verdict on S. Sushma v. Commissioner of Police.

This judgment is exemplary as Justice Venkatesh undertook a conscious effort to educate himself on the issue and understand the vulnerabilities of the LGBTQIA+ community in India. He stated,

“Ignorance is no justification for normalising any form of discrimination.”

Conversion therapy is widespread in India and practised by doctors and cosmic healers alike, underlining the interplay between science and religion. Thus, there is a need for the legislature to play an active role in declaring all forms of conversion therapy unethical and harmful.

Sensitisation and spreading awareness are equally important as the primary issue lies in treating homosexuality as an abnormality. It’s high time we accept that homosexuality or ‘queerness’ is anything but abnormal. It is a choice to choose one’s sexual orientation or gender. And anything that tells us otherwise is just uninformed and archaic.

These treatments facilitate an environment for prejudices. The need of the hour is to understand that homosexuality is not a mental disorder and therefore does not need a ‘cure.’

Price, Rianna. “Lgbtq+ Conversion Therapy In India: How It Began And Why It Persists Today.” The Conversation, July 20, 2020, https://theconversation.com/lgbtq-conversion-therapy-in-india-how-it-began-and-why-it-persists-today-140316. Accessed June 10, 2021.