Media trials in India have become more common than one would imagine; what started as a benign form of investigative reporting have spread like a wildfire of fake news and speculation. Therefore, these media trials invalidate legitimate media reporting by casting a shadow of unverified claims and generalisation. Ishita Singh and Harsh Bhargava present the predicament of media trials and how they could weaken judicial decision-making and democracy. They offer the essential historical point that marks the beginning of media trials in India and the world, presenting various principles that allow spaces for egalitarian reporting.

By Ishita Singh and Harsh Bhargava on July 5, 2021 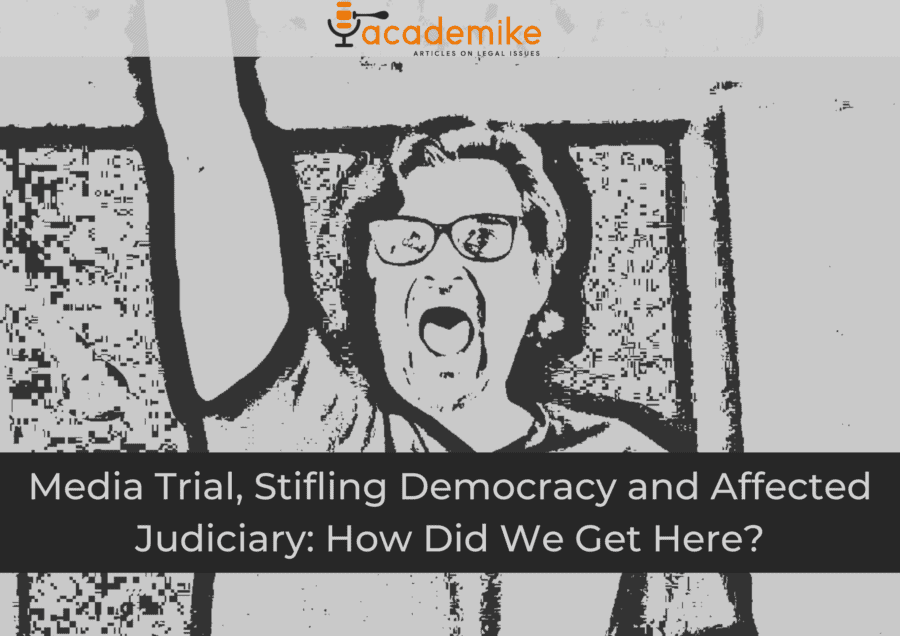 There is an undeniable synergy between media, democratic ideals, and the judiciary. Although media is assumed to restore democracy, in reality, it is far from doing its job. In the article, Mayannk Sharma explains the linkages between a well-functioning democracy and vigilant media. He highlights how media has failed to do its job since it’s too obsessed with improving television ratings. The same has led to media trials, which have further cast a shadow on the ‘actual’ trial.

By Varun Sharma Importance of Media In the famous Bennett Coleman vs UOI case,[1] the Hon’ble Supreme Court held that media is the main vehicle

Media plays a vital role in moulding the opinion of the society and it is capable of changing the whole viewpoint through which people perceive various events. Heinous crimes must be condemned and the media would be justified in calling for the perpetrators to be punished in accordance with the law. However, the media cannot usurp the functions of the judiciary and deviate from objective and unbiased reporting. While a media shackled by government regulations is unhealthy for democracy, the implications of continued unaccountability are even more damaging. Steps need to be taken in order to prevent media trials from eroding the civil rights of citizens, whereby the media have a clearer definition of their rights and duties, and the courts are given the power to punish those who flagrantly disregard them.

By A Gowri Nair & Saipooja, School of Legal Studies, CUSAT “Editor’s Note: The media is regarded as the fourth pillar of any democracy. An

By Priyan Garg, Amity Law School, Noida “EDITOR’S NOTE:- The recent times have exposed the diabolic methods used by government agencies all over the world

By Rahul Deo, CNLU Patna Editors Note:The high and speedier connectivity to the world from any place has developed many crimes and these increased offences

By Rahul Deo, CNLU Patna Editor’s Note: Freedom of speech and expression is the blood of democracy, palpitation of democracy, control of the government and

By Soumik Chakraborty Editor’s Note:Freedom of speech and of the press lay at the foundation of all democratic organisations, for without free political discussion no

By Pranav Gupta, Symbiosis Law School, Pune Editor’s Note:  This research paper emphasizes on several attributes of violence that prevails in India and which provokes

By Akshay Maheshwari & Anjali Bhatt, UPES Editors Note: After an extensive comparative analysis, the paper tries to throw light on the law as developed

By Mohak Rana NMIMS, School of Law, Mumbai  Editor’s Note: The present era is marked by two things: heavy reliance on technology and virtual space. But

By Ankitha Praveen, School of Legal Studies, CUSAT Editor’s Note: Freedom of speech and expression subject to reasonable restrictions is a fundamental right guaranteed by the Indian