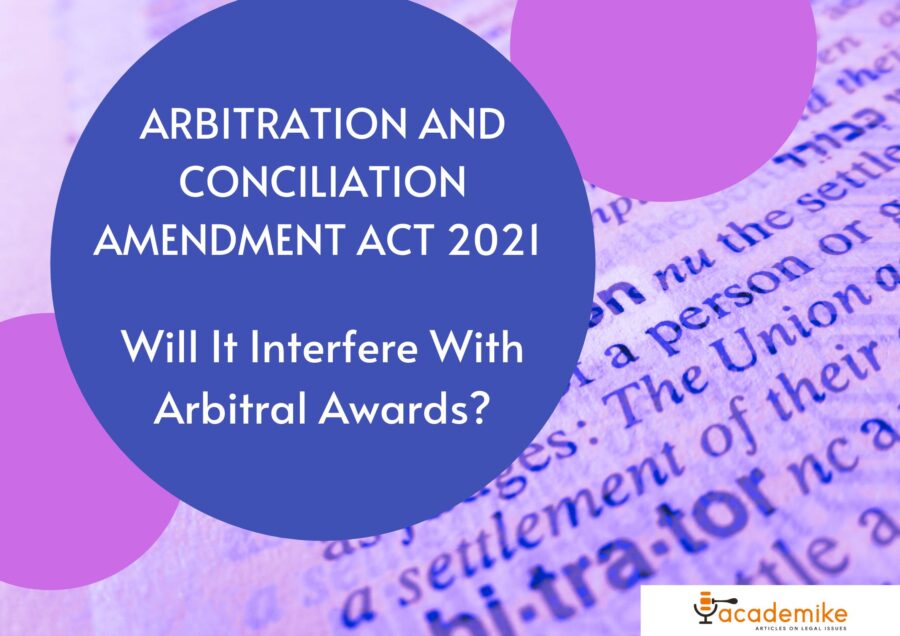 In March, Parliament passed the Arbitration and Conciliation Amendment Act 2021. The Act is the third amendment in six years to the Arbitration and Conciliation Act 1996 (principal Act).  This indicates that both the judiciary and government favour promoting Alternative Dispute Resolution as a consistent practice. However, the amendments also present certain shortcomings. For example, many have argued that it could interfere with arbitral awards due to the law’s vague definitions. Arindam Shit writes how the 2021 Amendment Act takes one step forward to two steps back due to its vagueness. The pandemic affected how we interact with the legal process.  However, it also pushed virtual courts in India and digitisation of the judicial process. From the materiality of paper files and the spatiality of legal galleries to virtual hearings, the aftermath is optimistic despite the circumstances that propelled this change. However, the virtual existence of the court has also offered several limitations, which still need to be addressed. Krati Sharma lists the advantages and limitations of virtual courts and hearings in India. On November 4, 2020, the Government had promulgated the Arbitration and Conciliation (Amendment) Ordinance. Earlier this year in March it repealed the ordinance and replaced the same with Arbitration Conciliation Act’21. It is discerned in the ‘Statement of Objects and Reasons’ of the Amendment that these changes are made to eradicate corruption. Rajrishi Ramaswamy decodes the 2021 amendment and compares their need in light of the Arbitration Act and previous amendments.

By Anonymous INTRODUCTION Technological Developments in the field of information and introduction of computers have made a turning point in the history of human civilization.

By Sumit and Oshoneesh Waghmare, NALSAR University of Law, Hyderabad, Telangana  Editor’s note:  An ombudsman is a public advocate who is usually appointed by the

By Sahil Arora, JGLS Introduction In this booming economy and the competitive world, it is natural for people to have opposing interests, needs, and values.

By Udisha Ghosh, Symbiosis Law School, Pune “Editor’s Note: One of the main reasons why arbitration is preferred over litigation is because of the confidentiality of

By Sanjana Sahu, School of Law- KIIT University  Editor’s Note:  This paper discusses the passive personality principle in general. Firstly, there is a determination of jurisdictional

By Amrit Subhadarsi, KIIT School of Law, Bhuvaneshwar “EDITOR’S NOTE:- This piece analyses the prospect of liberalization of the Indian legal service market in light

Aditya P Arora RGNUL, Patiala “Editor’s Note: The paper analyses the case of White Industries v. Republic of India which was the first judgment on

Arbitration is an alternative to litigation and any dispute that is civil in nature can be adjudicated through it. However, the independence to refer issues to arbitration is somewhat limited in India because the legislature has pre-existing institutions where issues are to be handled. For instance, Telecom Dispute Settlement Appellate Tribunal (TDSAT) passed an order barring arbitration in matters of telecom and broadcasting as there was no scope for it under the Telecom Regulatory Authority of India act, 1997. Surprisingly the English law has not expressly defined Arbitrability in its act and this lack of definition makes it difficult to understand the concept as to which disputes are arbitrable and which in fact are not. However, the definitions extracted from various case laws state that Arbitrability depends on the civil nature of the suit and capability for legal determination and that prior agreement that dispute be referred for arbitration must exist between the parties to the dispute. Therefore, there is a very thin line of difference between arbitration in India and UK, and a comparative analysis of the two would be beneficial.

By Debkanya Naskar, NUJS INTRODUCTION Arbitral immunity is a protection mechanism guaranteed to the arbitrators against any civil liability arising from their adjudicatory function.[i] This

Settlement of disputes through reference to a third party is a part of the volkgiest of India since times immemorial. It has undergone a phenomenal metamorphosis, growing from the stage of village elders sitting under a banyan tree and resolving disputes to the stage of gaining a statutory recognition. India has put in place a progressive piece of legislation which is essentially based on the Model Law and the UNCITRAL Arbitration Rules. The Parliament enacted the Arbitration and Conciliation Act of 1996 with a view to making arbitration less technical and more useful and effective, which not only removes many serious defects of the earlier arbitration law, but also incorporates modern concepts of arbitration. What it now needs is inculcation of the culture of arbitration within the bar, the bench and the arbitral community.

By Rahul Deo, CNLU Patna Editors Note: Courts are overburdened with the cases. It is the temptation that has led the legislature to incorporate the

By Swati Duggal, UILS, Punjab University Editor’s Note: Arbitration is a form of alternate dispute resolution where the parties to a dispute settle the dispute

By Aditi, WBNUJS Editor’s Note:This paper seeks to identify the significance as well as challenges of the doctrine of religious arbitration from its western experience,