Recently, instances of animal cruelty in India witnessed a surge. The same has ushered the debate around animal rights and the extent of legal protection that the current laws provide them. The issue is that most such crimes go unreported or are met with an underwhelming legal response given that the Prevention of Cruelty to Animal Act 1960 and sections from the Indian Penal Code appear dated. S.S. Rithika writes about the prevailing scenario concerning animal cruelty and current laws, procedures and court orders that deal with animal cruelty in India. Rithika also presses for the reworking of these legislations to curb rising brutality against animals. 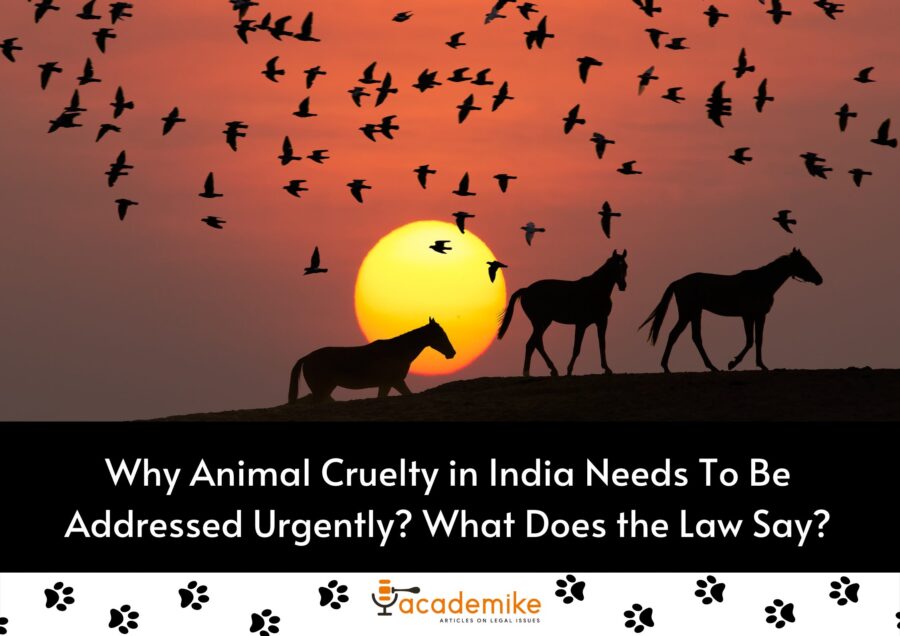 Everyone’s aware of the brutality that humans inflict upon animals.

Recently, in an unfortunate incident, a dog named Bruno was treated inhumanely. The same was met with a worldwide virtual protest. [1] However, this is not the first incident but one among the many, which often go unreported.

Despite legislation and rules against animal cruelty, India constantly witnesses unnatural deaths of animals across the country. Nevertheless, surprisingly, India ranked second in the Global animal protection Index in 2020. [2]

Since plenty of cases relating to animal cruelty are pending, it lends the question: why is there a need to have separate legislation for animals?

Here, the Constitution of India offers a concise answer. According to Article 51A (g), one of our fundamental duties mandates to protect the natural environment and have compassion towards all living creatures. [3]

Further, according to Article 48A, a Directive Principles of State Policy, even the state is obliged to protect and improve our environment.[4]

Thus, these duties are correlated with animals’ rights. These are incorporated in two central legislations:  the Prevention of Cruelty to Animals Act, 1960[5] and the Wildlife Protection Act, 1972. [6] The four main rights under these legislations are:

Section 11 of the Prevention of Cruelty to Animals Act 1960 (PCA Act, 1960) makes it an offence to beat or torture animals. [7] All kinds of cruelties towards pet animals by their owners are an offence under this section. Even organising animal fights as a sport/entertainment is an offence that will be punished with a fine ranging from Rs.50 to Rs.100 or imprisonment for three months or both. The PCA Act deals with animal cruelty and Section 428 and 429 of the IPC 1860 [8] criminalise killing or maiming any animals for commercial purposes.[9]

Using animals for entertainment and commercial purposes also comes under cruelty and is restricted in animals’ interest. Section 26 of PCA Act 1960 punishes the Act of exhibiting or training any animals, and they will be fined up to RS.500.[10] But there is an exemption for this restriction in Section 27. [11] Training or exhibiting animals for bonafide purposes like military training, educational purposes will be exempted from the hands of Section 26.

Many must have wondered that why there is no dolphinarium in India? Since dolphins are the aquatic animal of India, they are placed under Schedule I of the Wildlife Protection Act 1972. [12] This legislation provides a list of species in Part II and Part II A of Schedule I, needed to be protected. Thus, India banned the use of dolphins for entertainment shows or any commercial purposes w.e.f May 17, 2013. [13]

Wildlife Protection Act defines hunting as not just an act of killing or poisoning wild animals. Still, it includes those acts that disturb wild animals’ lives, such as destroying the egg of animals or reptiles or disturbing their nest. Thus, under Section 9 of the Wildlife Protection Act,  hunting is punished with a fine of Rs.25, 000 or imprisonment for up to 3 years or both.[14] Again this Act allows hunting for special purposes like scientific or educational purposes.[15]

How to Register an Offence related to Animal Cruelty in India?

Unlike the lore from the Chola Dynasty, famously called the Manu Neethi Cholan’s story, not all affected animals can knock on the judiciary’s door.  However, humans have often lent their voices against cruelty.

Upon witnessing cruelty, one can take the following steps to file an official complaint against the violation of animal rights.[16]

Three important cases where the judiciary recognised equal rights for animals that are worth mentioning include:

According to the report published by the Federation of Indian Animal Protection Organizations (FIAPO) and All Creatures Great and Small (ACGS), between 2010 and 2020, a total of 4 93,910 animals are exposed to cruelty by humans.[21]

Out of 1,000 assault cases recorded against animals, over 400 cases were of violent attacks of beating, kicking, throwing acid, or boiling water on animals.[22]

The cruelty inflicted upon animals includes sexual abuse and hurting the private parts of female animals. Particularly stray animals are the major victim of these crimes. [23] Thus, in the presence of such violent actions, effective operation of animal protection laws are far–fetched and impossible.

At least 50 animals die every day because of animal cruelty in India[24]. But these numbers are the tip of the iceberg because most instances of violence against animals go unreported.

This fearlessness comes from oblivion, as many are unaware that their actions against animals are an offence. Plus, often, this cruelty is trivialised.

Additionally, all animal rights are neglected as the penalties imposed for their violations are pint-sized.  For instance, a first-time offender for animal cruelty is punished with a fine which ranges from Rs.10 to Rs.50[25].

In many cases, laws protecting animals don’t adequately cover the extent of crime, making animals easy prey for humans’ merciless behaviour. Thus, the main cause of increasing animal cruelty in India is the legislative lacunae.

The first step of legislation towards animal welfare is the repurposing the Prevention of Cruelty to Animals Act 1960. The purpose of this Act was to prevent unnecessary pain or suffering on animals. However, given that the law has dated, it needs to be repurposed to deal with the current scenario of animal cruelty. Since this is a decade-old Act, it has already gone off its trajectory over time.

They are no longer protections that could ensure safety or promulgation. Thus, the state must refurbish the 1960 Act to amend its provisions and increase the punishment given the degree of the crime.

The sum of the present fine is Rs.50 for torturing animals, but the same could be increased from Rs.750 to Rs.3 750. Any act of hurting or killing animals for any purpose must be treated as a criminal offence and should be punished with a fine of Rs.75 000 or three times the cost of the affected animal.

The issue of speciesism, i.e., the bias favouring humans over animals, should now be a thing of the past. Instead, all animals must be given the same rights at par with humans, and the same must be extended to cows and chickens.

Thus, it won’t create any loopholes in the operation of animal laws and will occlude the lacunae in the existing laws. In addition, most instances of animal cruelty are not investigated and adjudicated, as the police often refuse to register a case.

Above all, the sections for animal cruelty must be made cognisable. As rightly said by Varda Mehrotra, executive director of FIAPO,

“We need a revision in law, which reflects the prevailing values of our society, the ethos of ahimsa from our spiritual teachings, the idea of compassion from the constitution and the correct nature of the crime.” [26]

Thus, it is time to make the laws even more stringent and harsh on the perpetrator. After all, the animals must be treated at par with humans and be given some fundamental rights to live peacefully.

[21] In their own right- calling for parity in law for animal victims of crimes, Justice (Retd.) KSP RADHAKRISHNAN, Crimes Against Animals – Federation of Indian Animal Protection Organisations (fiapo.org)

1 thought on “Why Animal Cruelty in India Needs To Be Addressed Urgently? What Does the Law Say?”