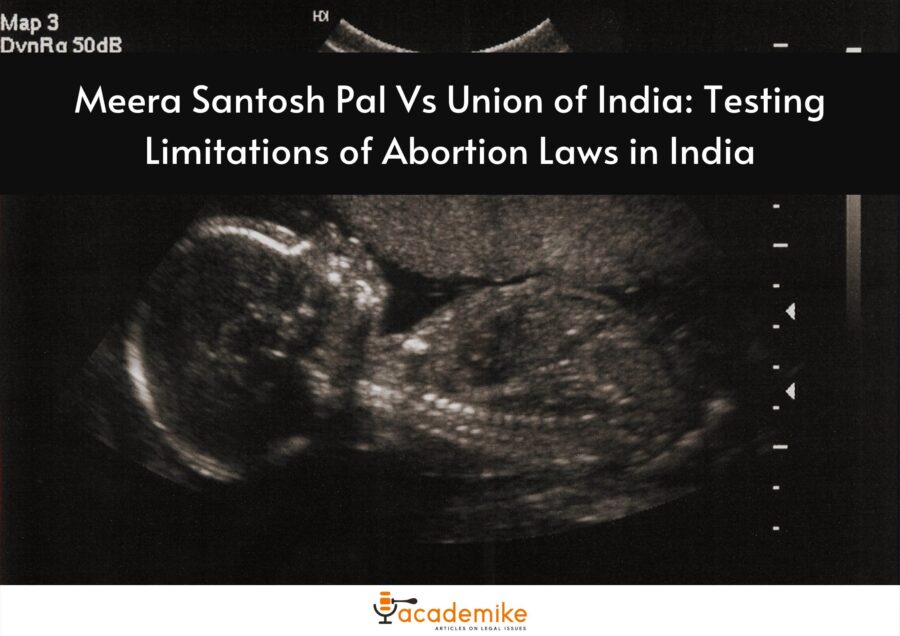 In 2017, a married woman (22) approached the Supreme Court to abort her fetus of 24 weeks, as the latter suffered from ‘anencephaly’.

‘Anecephaly’ is a defect where a baby is born with an underdeveloped brain and an incomplete skull.[1] A baby born with this defect is mostly stillborn or dies shortly after birth, and to date, there is no standard treatment for this defect. Hence, if a pregnancy is not terminated, it could gravely affect the mother’s mental and physical health.[2] Thus, the petitioner wanted to terminate her pregnancy.

However, under the Medical Termination of Pregnancy Act 1971, physical incapacity was admitted as grounds for termination only till the twentieth week of gestation, which she had crossed.

In that case, according to the MTP Act 1971, the only justification for procuring permission to abort is when there is a threat to the pregnant women’s life.

This article will analyse the judgment and the petitioner’s right to her bodily autonomy through abortion laws in India.

What is the Medical Termination Of Pregnancy Act 1971?

Section 3 of the Medical Termination Of Pregnancy Act 1971 states when a registered medical practitioner could terminate a pregnancy.[3]

Clause 2 of Section 3 states the conditions and limit till an abortion can take place by a registered medical practitioner:[4]

Section 5 of this Act played a significant role in the Meera Santosh Pal case.

This section says that nothing said in sections 3 and 4 shall be applied to a situation where a registered medical practitioner in good faith prescribes that termination is immediate; otherwise, it could be life-threatening for the woman.[8]

Overview of the Judgement

A set of trusted medical practitioners examined the petitioner. They confirmed that she was 24 weeks pregnant, and her unborn child had a defect called ‘anencephaly’.

On the advice of the medical practitioners, the Court decided that if the petitioner goes through the entire term of pregnancy, it would adversely affect the petitioner’s mental health, putting her life in danger.

So they recognised a woman’s right to terminate her pregnancy concerning the safety of her life, and even though these rights are not absolute, it’s still of great significance.

The Court also referred to Suchita Srivastava and Anr vs Chandigarh administration. [10] In Suchita Srivastava, a three judges’ bench had reiterated the need for consent of the pregnant woman for termination or abstaining from it. The Court held:

“There’s no doubt a woman’s right to make reproductive choices is also a dimension of ‘personal liberty’ as understood under Article 21 of the Constitution of India. It is important to recognise that reproductive choices can be exercised to procreate as well as to abstain from procreating.”

“The crucial consideration is that a woman’s right to privacy, dignity and bodily integrity should be respected. This means that there should be no 1 [2009 (9) SCC 1] 11 20.6430.18 wp.doc restriction whatsoever on the exercise of reproductive choices such as a woman’s right to refuse participation in sexual activity or alternatively the insistence on use of contraceptive methods. Furthermore, women are also free to choose birth- control methods such as undergoing sterilisation procedures. Taken to their logical conclusion, reproductive rights include a woman’s entitlement to carry a pregnancy to its full term, to give birth and to subsequently raise children.”

Coming back to the Meera Santosh Pal case, the Court held that it was crucial first to recognise the petitioner’s rights as a woman. Thus, it was essential to save her from a long-lasting mental trauma that could have aggravated if she continued this pregnancy to her full term.

Thus, the Court allowed the termination under the provisions of the Medical Termination of Pregnancy Act 1971.

It was further stated that termination of her pregnancy should be carried out by the doctors of the hospital where she had all her medical checkups. In addition, her pregnancy termination will be monitored by the medical board listed above, which would record the procedure to be performed on the patient.

Similar to the Meera Santosh case, in Vaishali Pramod Sonawane v. Union of India, the petitioner approached the Court to terminate her pregnancy at the 24th-week mark.

The petitioner presented that after being examined by a sonologist, certain congenital anomalies were reported. A congenital anomaly is a type of defect which develops in a baby before or at birth. Due to this defect, a lot of babies die within weeks after birth.[11]

As per the World Health Organisation (WHO) data, till 2016, around 295,000 newborns have died within four weeks of birth worldwide.[12]

Accordingly, the petition was allowed by a Division bench comprising Dharam Chand Choudhary,j. and Vivek Singh Thakur and directions were given to proceed with the termination of the pregnancy at the Kamla Nehru Hospital for Mother and Child, Shimla.[13]

In another case, a rape survivor from Bihar approached the Court to terminate her pregnancy.

The petitioner lived on the streets as she was thrown out of the house by her husband and inlaws. [14] She was then taken in by a shelter home. After living there for some time, they found out that she was pregnant and then took her to the Patna Medical College hospital to terminate her pregnancy with her consent. Her brother and father were called to sign up a consent form, and in this process, it was also found out that she was HIV+.

When she approached the Patna High Court, a single judge bench impleaded the husband, but it didn’t reach him since his information was incorrect, which caused further delay. Later, she was again examined by the multi-disciplinary committee of the Indira Gandhi Institute of Medical Sciences for her mental and physical state. However, by the time she was 24 weeks pregnant and the Court rejected her plea.

Against this decision, the woman again approached the Court, challenging the earlier order. Hearing her plea, the three-judge bench comprising Dipak Mishra, Amitava Roy and AM Khanwilkar noted that it was due to Patna High Court’s negligence that the woman couldn’t terminate her pregnancy on time.

The Court noted that she decided on abortion when she was 13-weeks pregnant. So, there was still legal for her to get the pregnancy terminated under Section 3 (2) (ii) of the Medical Termination of Pregnancy Act 1971. However, the bureaucratic and juridical delays reduced her legal window to abort.

Further, the bench observed that the single bench judge didn’t need to implead the husband since the petitioner was a rape survivor and a victim of domestic violence. And the same could have affected her mental health even more.[15]

The bench ordered the State of Bihar to pay Rs.10 lacs as compensation to the petitioner for her irreversible condition. The Court further asked the state to offer the amount as a fixed deposit in the appellant’s name so that she could enjoy maximum interest. Besides, the Court iterated that the State of Bihar will take full responsibility for the child’s wellbeing, providing proper treatment and nutrition.

The Medical Termination of Pregnancy Act 1971 was vague and filled with inconsistencies. Moreover, the Act was socially and scientifically outdated.

It also excluded unmarried women, thus, forcing them to seek judicial intervention, or in some cases,  succumbing to unsafe abortion. In addition, the delay by the judiciary in hearing such cases further projected mental trauma on women, increasing hassle and reducing the window to abort.

The new Act also considers the Sustainable Development Goals 3.1, 3.7 and 5.6 adopted by the United Nations in 2015.  Among these goals, 3.1 envisages reducing the maternal mortality rate, while 3.7 and 5.6 are set to offer worldwide access to sexual and reproductive health and rights.[17]

Further, the 2021 Amendment is conscious of protecting the woman’s identity. Furthermore, the amends have also prescribed more stringent punishment in case of any violation.[18]

The amended Act further includes unmarried women in the clause regarding the failure of contraceptive methods to prevent pregnancy[19]. However, the Act is still far from perfect as many issues still need to be relooked.